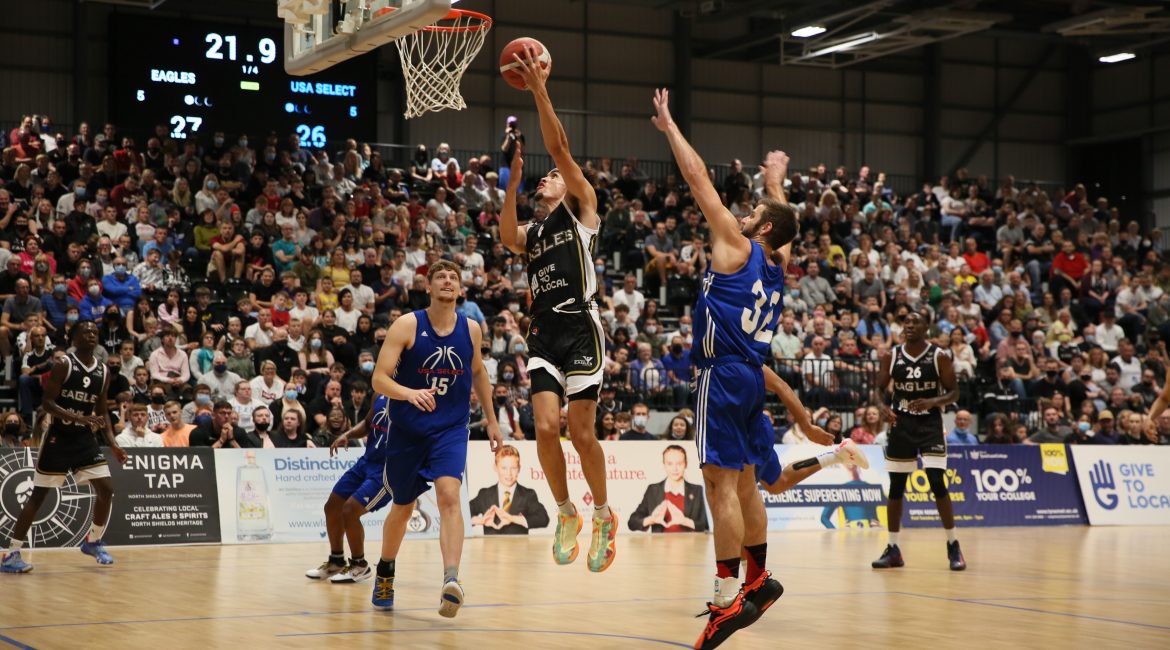 A 1,000-strong crowd — a club record for a friendly — was rewarded with a typically frenetic affair against familiar foes.

And with the bulk of Ian MacLeod’s roster yet to touch down on Tyneside, the Geordie playcaller took plenty of positives from an entertaining clash.

Newcastle took on USA Select in a now traditional curtain-raiser missing the majority of their new signings.
Visa issues and red tape affecting BBL franchises across the UK meant none of the Eagles’ incoming imports were suited up ahead of tip-off.

But club officials are confident of making progress within the next 72 hours and expect the first of their close-season captures to begin arriving next week.

The absence of returning favourite Rahmon Fletcher et al did, however, open the door to Newcastle’s new breed of emerging talent.

And Eagles Academy products Themba Yabantu, named in the starting five, and Sauveur Kande made the most of early opportunities to impress.

Kyle Williams, the dual national guard back in the North East following spells in Iceland and Spain, looks set to be a popular returnee.

And the pacey playmaker announced his Newcastle comeback with a towering three pointer to open the scoring.

But it was the USA Select’s scratch side of wannabe professionals who quickly took control of a free-flowing fixture midway through the first period.

And the hosts had to come back from a disarming double-figure deficit to take a hard-earned 29-26 lead into the second quarter.

But Newcastle always looked most dangerous from the perimeter and back-to-back triples from Johnson and Williams opened up a 39-31 lead midway through the second quarter.

If Louis Sayers was struggling to get in on the three-point act then the returning guard — and one of the breakout stars of the Eagles’ double-winning 2020/21 season — put in a relentless defensive shift.

And the hosts appeared to have put a shaky start behind them as MacLeod’s men took a deserved 51-41 lead into the locker room at the half.

USA Select trimmed the deficit to six points heading into the fourth quarter but Newcastle closed out a welcome win with room to spare.