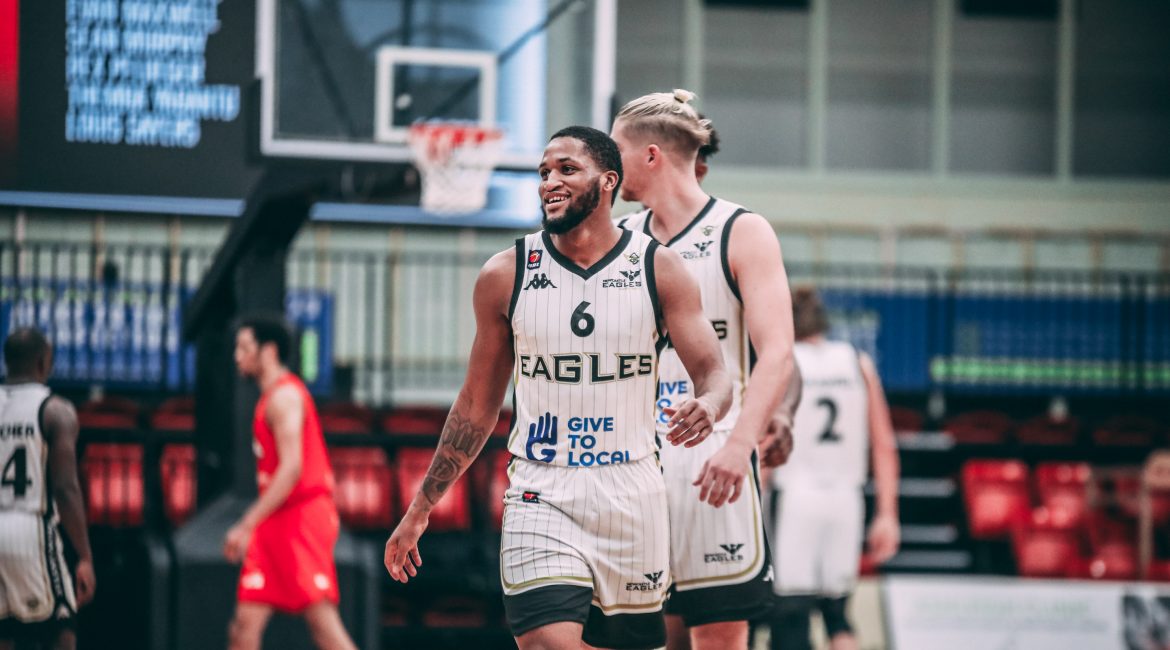 The Newcastle Eagles go into tonight’s BBL Cup clash with fierce rivals Leicester Riders in confident mood following their win down in Leicester on Sunday. But equally Riders come North with revenge their motivation to reserve the last result.

The 102 – 96-win last weekend was a consummate team performance from an Eagles side that is already looking like an exciting outfit with lots of real potential. It took them to a 2 – 0 record in their Cup group and another win tonight would really see them cement their superiority.

Head Coach Ian MacLeod will be looking at all his players to reproduce the form they’ve so far brought to the hardwood in their victories over London and Leicester as they open their home programme for 2020-21.

One of those players is new guard Cortez Edwards whose 17 points, 9 rebounds and 6 assists at Riders made him Newcastle’s most efficient player of the night, earned him a place in the BBL All-Star starting five of the week as well as scooping him The BBL Podcast Player of the Week.

Edwards has been delighted with the start that his new team have made and how they’ve hit their strides right from the off in the new season.

“Our two wins so far were both exciting games. We got both teams to play our style of play which is hard because we play fast and they found it hard to slow us down. We figured out a way to win which is always a good thing especially in such big games early in the year.”

“Those tight games learning how to win creates good habits. I’m very encouraged by what I’ve seen from us so far. There’s a lot of positive energy throughout the whole game. We keep reassuring each other that we’re doing the right things and that’s helping us end up with the win.”

Last year at Worcester Edwards proved to be one of the standout players in the league and the Eagles were delighted to be able to clinch his signature for this season and he’s started the season in fantastic form.

“I was pretty excited about the way I played on Sunday. Actually, I would say it was a normal type of game for me. I wouldn’t have said it was a spectacular performance. I always try to put in an all-round performance to make myself and the team efficient and try to affect the whole game.”

It is a quick turnaround from Sunday and there’s no doubting that both sides know a little bit more about each other because of that game. It makes for another fascinating clash.

“It’s going to be a tough game again because of the familiarity. We pretty much know what each other’s going to do now. It’s about execution. Whoever is going to execute on defence and offence and make the right plays to win is going to be successful.”

“You try to block out the previous game but it’s hard too especially as you go into it after it being the last game you played. The plays you made against certain players and the plays they made against you it’s fresh in your minds so you’re aware of that.”

“It’s about making minor adjustments to those plays to find a way of getting the better of them again. I have to say that playing in front of no fans makes the gyms seem a lot colder and the air is colder so it hits your chest a bit.”

“But it’s always fun to get out there and play. That’s what I’ve come here for to play the game. I actually think that the Lockdown has helped us prepare well for our season.”

It will be strange to watch an Eagles v Riders game without the benefit of a full ECA behind the home team. That may make it tougher for Newcastle but the form they’ve showed so far in their opening games means they go into tonight’s game in a really positive and upbeat mood.

Virtual tickets for the live stream to watch online are available on our box office. Coverage starts from 7:20pm with the tip-off at 7:30pm.