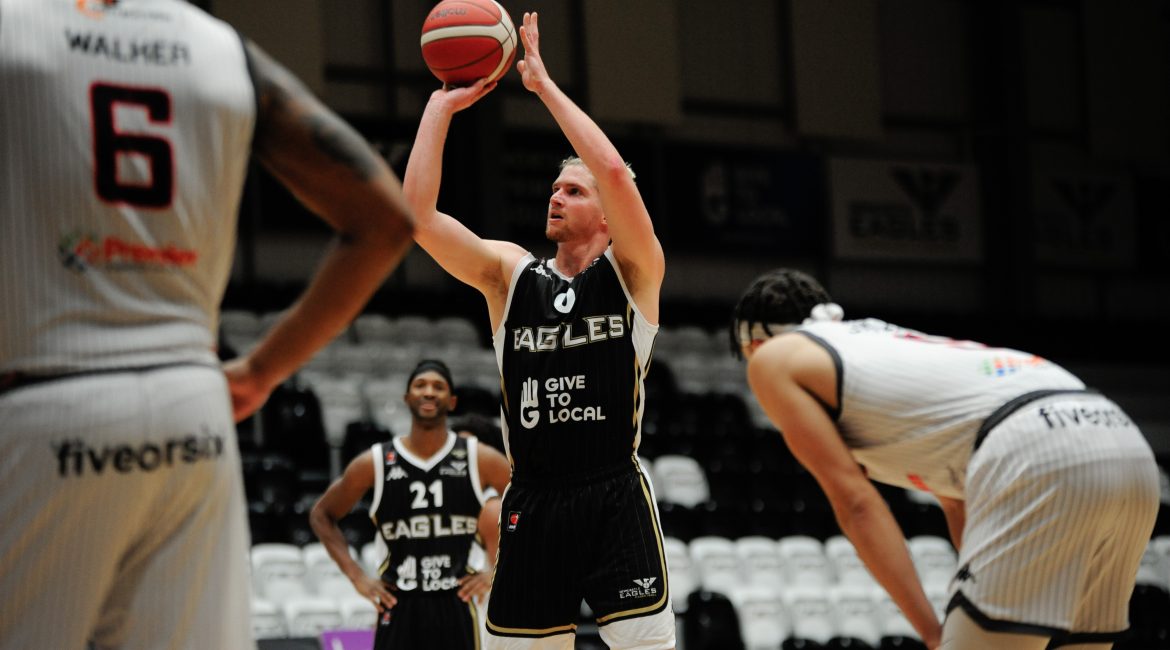 Friday 13. In the middle of lockdown.

But not for the thousands of British basketball fans who woke up to the news that the BBL would return to Sky Sports this season.

The Eagles Community Arena will host back-to-back live league fixtures on December 3 as part of a mouth-watering double-header launch show.

Exciting times ahead for a sport that’s battled hard to keep the hoops flag flying during a global pandemic.

And further evidence that domestic basketball can bounce back as a ratings winner and a worthy addition to the competitive Sky Sports roster.

Lasker, of course, has dipped his toes into broadcasting already this season as the popular face of podcast The BBL Show.

But last night was all about the day job and helping Newcastle maintain an impressive 100 per cent start to the BBL Cup campaign.

The Texan returned to action off the bench to play a typically feisty cameo in Sunday’s dramatic win at Leicester.

And after recovering from COVID-19, the lively Lasker looked like the perfect addition to a team that had taken a thrilling overtime clash in London the previous weekend.

At full strength and full of confidence, the in-form hosts took to the court fully expecting another tough night at the office against old foes Riders. So it would prove.

After a hard fought first quarter there was nothing to separate two teams tipped to be in the mix for silverware again this season.

Tied at 20-20 following the opening 20, both sides had shown glimpses of their attacking prowess.

But the highlight of an eye-catching opening period was an audacious reverse pass from the otherwise quiet Justin Gordon which landed in the hands of Rex Pflueger.

But what of would-be pundit Lasker?

Introduced a minute before the end of the first quarter, the 37-year-old eased himself into action with a regulation rebound.

And seconds after the restart it was Lasker’s chest-pumping ‘and-one’ (let’s gloss over the fact that he missed the freebie) which had team-mates roaring their approval off the bench.

The bright lights of the Sky studio might be beckoning but the Eagles playmaker wasted no time in reminding the Riders that he’s not about to hang up his boots just yet.

Lasker loves his role as Newcastle’s elder statesman and a tough summer fitness regime meant the naturalised Brit looked leaner than ever heading into his eighth straight season in an Eagles vest.

And the hosts always look livelier with one of the BBL’s most familiar faces coming off the bench.

But Lasker could little to prevent Leicester taking an increasingly strong grip on the game heading towards the half.

The visitors had their own key man coming off the bench in the shape of Mo Walker and the centre added two boards to his 11 points in just 10 first half minutes.

On World Kindness Day it was a noble gesture by the hosts to allow Rob Paternostro’s men a five-point advantage heading into the third period.

But there was no compassion from the match officials as Rahmon Fletcher picked up a fourth foul within three minutes of the third period.

Asked to play additional minutes, the new face of the BBL on Sky made it his mission to find Pflueger at every opportunity with the Newcastle rookie – who finished with 21 points, eight rebounds and five assists – in red hot form.

But it was Lasker who set the seal on a fine late quarter comeback to fire the Eagles 62-61 up with 10 minutes on the clock.

Fletcher returned to the fray with eight minutes to play but the Eagles’ two-time MVP had no answer to a flawless Riders finish.

And the hosts – led by the relentless Geno Crandall – were well worth the big cup win that throws Group 3 wide open. Sheffield, who suffered an 88-73 defeat to London earlier in the day, are next up at the ECA on Tuesday.