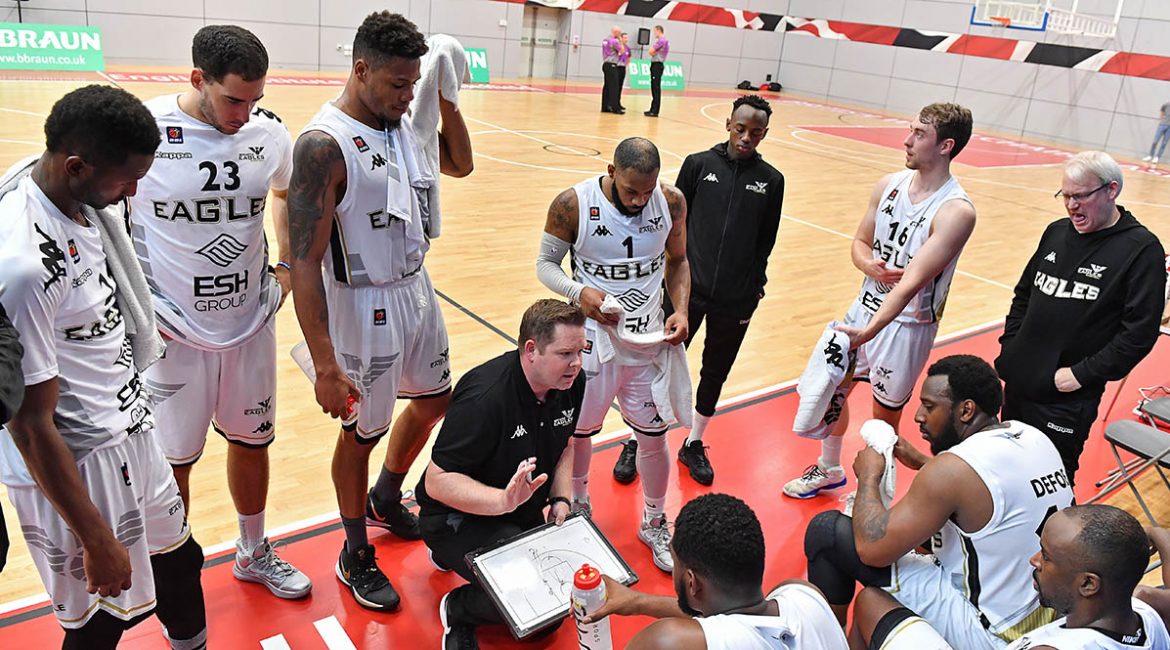 Ian MacLeod has urged his players to keep their minds on the job after admitting mental lapses have undermined Newcastle Eagles’ start to the season.

Fabulous Flournoy’s successor leads his side into action against Manchester Giants following three defeats on the bounce.

But interim head coach MacLeod has used a nine-day break from competitive action to get inside the heads of a talented roster requiring a fresh focus.

“Losing the games we have done down the stretch is due to a combination of factors but the biggest is that we’ve been relaxing mentally,” said Newcastle’s playcaller.

“I don’t think we’ve faced any team so far this season where we haven’t looked capable of rolling them over at some point in the game.

“We’ve been in winning positions and so it’s the mental side of things that we need to focus on.

“It’s built into everything we do: whether it’s how we respond to adversity, how we play through fatigue, how we do our jobs every day.”

Newcastle got off to a flier in the BBL Cup group stages before slipping into a dangerous habit of losing winnable games down the stretch.

Sheffield Sharks and Leicester Riders have both exposed a team that suddenly appears incapable of finishing the job.

But three damaging defeats have not been enough to derail the Eagles’ Cup campaign – MacLeod’s men confirming their quarter-final berth on the back of Glasgow Rocks’ defeat to Leicester on Friday.

Back-to-back fixtures against Manchester will conclude the group stage of the tournament but the Giants can no longer qualify for the last eight.

“I’m pleased we’re through to the quarter-final of the cup – of course I am,” added MacLeod. “It’s just the first step this season but progress is always part of the plan.

“The fact that we’re through – and the Giants are effectively out of the competition – cannot be allowed to change our mindset and I don’t expect it to.

“We have some things to fix on this team which aren’t simply linked to results.

“The things that we need to get right are performance-based and so the group standings in the cup can’t be allowed to affect that.

“We’ve had nine days off at this stage of the season which you don’t often get in the BBL. We’ve used that time wisely and spent a lot of time in the video room and discussing roles. “We would have been foolish not to use this time to our advantage.

“I’ve talked about seeking clarity around individual roles and around what we need to do as a team before but it’s an ongoing process.”

Manchester have won just one of their eight North Group fixtures to date and Newcastle head to the North West as red hot favourites to end that three-game losing streak.

But the homecourt Giants boast enough offensive weapons to keep the visitors keen and MacLeod will be looking for a ruthless display from his under-fire squad.

“Manchester have been through a lot of changes already this season,” he added. “They’ve retained a few stalwarts but they’ve been bringing new faces in too.

“We know the Jones brothers and we know all about Ingus Bakevics. It’s clear that Del’Vin Dickerson is their volume shooter and we have to make sure that we’re diligent when he’s on the ball.

“We know a lot about a few of their players and like everyone else we’re learning about the new guys. But this weekend is about how we play and how we develop.”

This clash tips off at 5pm on Sunday afternoon and is live on the BBL’s YouTube channel: