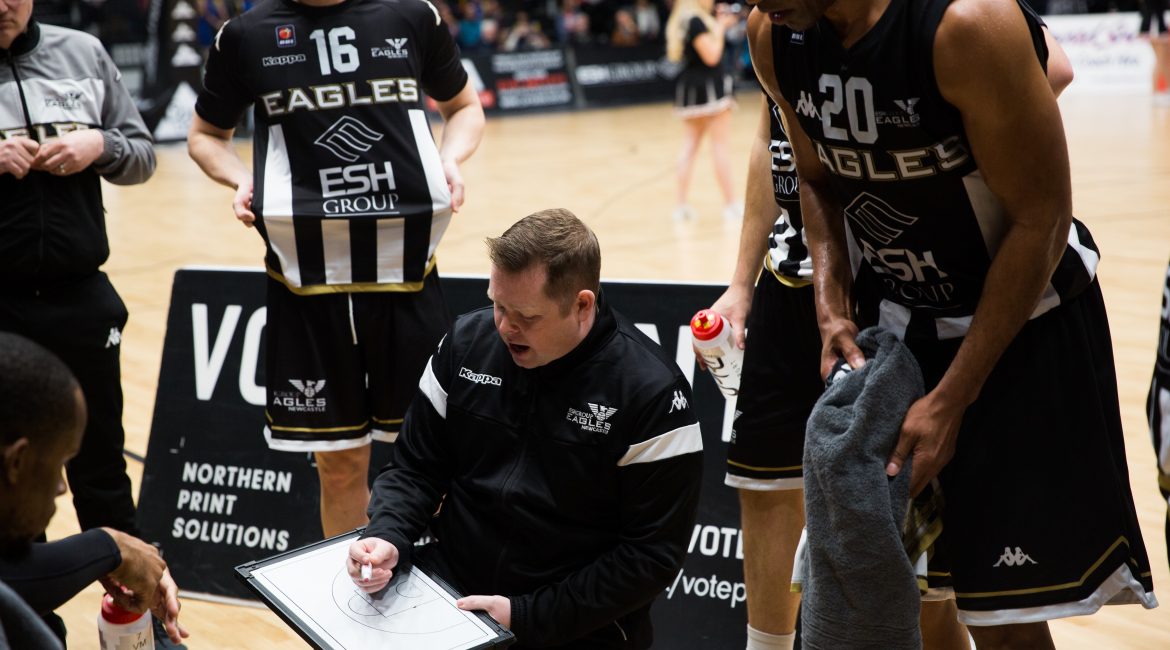 Newcastle Eagles have promoted from within after handing Fabulous Flournoy’s former assistant the keys to the most successful club in British basketball.

Ian Macleod became one of the veteran playcaller’s most trusted lieutenants in recent years and last season saw the Geordie coach given even greater responsibility on match nights.

And Newcastle managing director Paul Blake has moved to end any short-term speculation regarding Flournoy’s successor by naming Macleod as the Eagles’ interim head coach.

“Ian is a talented, well-respected and ambitious coach who deserves his chance,” he said.

“I am excited to see what he can do as a head coach and I want to give him time to make his mark in the BBL.

“He has lived and breathed Newcastle Eagles for almost 20 years now and this appointment represents the culmination of an incredible journey with the club.

“Ian has been working closely with Fab and Dave Forrester all summer to recruit a team capable of challenging for silverware this season and he knows these players inside out.

“I took a chance on Fab as an untried head coach 17 years ago and look how that worked out. I’m prepared to do the same where Ian is concerned and I felt a degree of continuity was critical during a period of significant change.”

Macleod, who was on GB Under 18 duty as an assistant coach earlier this summer, has a burgeoning reputation within the British game as one of basketball’s rising stars.

The 36-year-old is renowned for his attention to tactical detail and will continue to work alongside Forrester – with no immediate plans to add to the club’s coaching staff.

“I was approached about the head coach’s position a few days ago and it’s an incredible opportunity for me,” said Macleod, who was appointed as an assistant to Flournoy in 2013.

“To be offered a head coach’s role at any BBL club would be a fantastic opportunity for someone in my position but Newcastle isn’t any club. I’m well aware of that.

“But I’ve had a few days to think about the position I find myself in and I’m fully focused on what I want to happen moving forward.

“Realistically it’s something I’ve worked towards for the best part of 20 years. I’ve always wanted to be a professional coach and to do that at Newcastle is extra special.

“I’ve been involved at every level of the club since I was a kid – from volunteering at hour-long community sessions to joining Fab’s BBL coaching staff, it’s been an amazing journey and I’ve seen how this club works at first hand from top to bottom.”

Macleod is under no illusion as to the enormity of the job facing any coach tasked with following Flournoy.

But he is relishing the opportunity to lead a roster built to put Newcastle back on top of the BBL this season.

“I’m fortunate to be inheriting a strong roster and a deep roster,” he added. “I’ve been working closely with Fab and Dave all summer in terms of recruitment so I’m confident we have a well-balanced team.

“As a club we always do our due diligence where the character of players is concerned and the guys I have around me are wholly committed and very coachable.

“Because of the nature of Fab’s role I know most of the guys who I’m coaching very well. There’s a level of familiarity there as far as the returning players are concerned – I know how they work and vice versa.

“It’s been all hands on deck since Fab confirmed he was moving to the Raptors. I’ve already worked hard to ensure the players are on the same page as me and while it’s been important to celebrate what Fab has achieved and look back on some great memories it’s now all about getting back to normality.

“It’s all about ensuring that we’re match ready for the first competitive fixture on September 20.”

It is hoped Sade Ade Hussein will be fit to suit up after the Frenchman picked up a knee injury in Tuesday night’s narrow defeat to the touring USA Select side.

And Macleod could hand a debut to Mike Morsell after the ex-Towson Tiger touched down on Tyneside last night.

Tickets for pre-season and the first 2019-20 BBL season game are on sale now from the all-new box office.