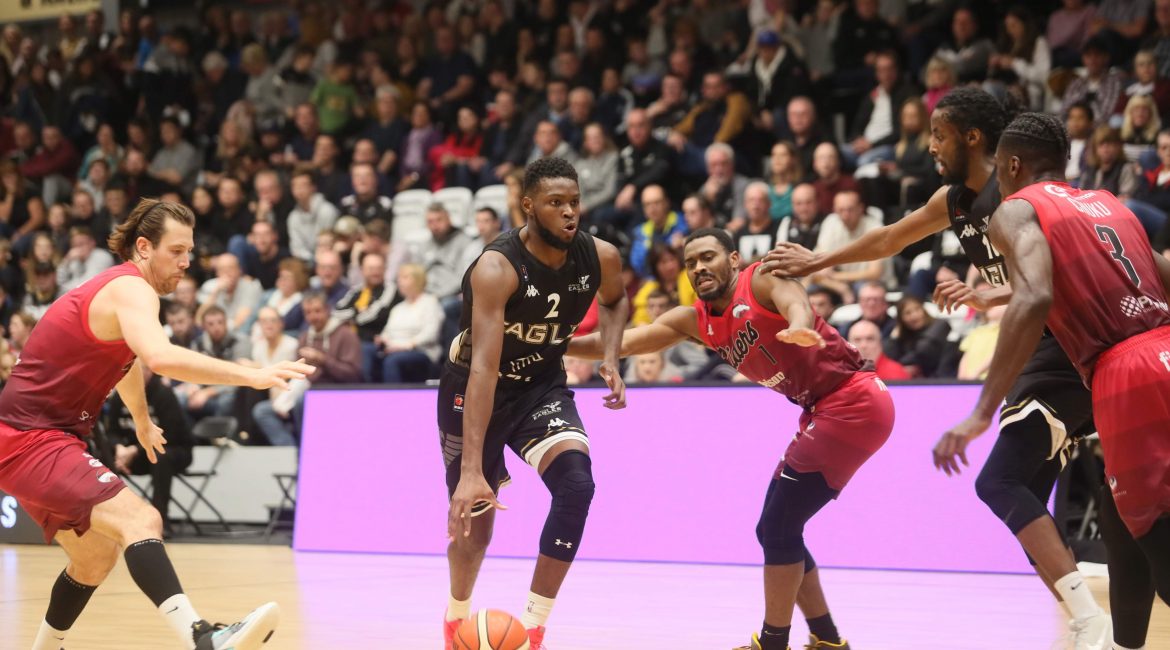 Newcastle Eagles were left to lament a poor third quarter performance as they blew a half-time lead against long-time rivals Leicester Riders in the BBL Cup Northern Group.

Heading into the second half, Newcastle held a six point lead over Leicester.

But unfortunately for coach Ian Macleod’s side, a bruising third quarter and costly turnovers acted as the catalyst for his sides third consecutive defeat- with the Eagles losing 76-69 to the Riders.

During the preparation for the Friday night showdown with Leicester, Macleod stated that both his players and coaching staff were eager to rectify their recent poor performances.

But while Macleod’s men wanted to come out of the blocks flying, Q1 started with the visitors opening the scoring on the back of an uncharacteristic Rahmon Fletcher turnover as they silenced the Eagles Community Arena.

If the atmosphere was a little subdued to begin with, it was positively raucous when the ball found Eagles Forward Mike Morsell’s hands.

The Washington D.C. native managed to nail two consecutive three-pointers with supreme ease to get the crowd going.

Suddenly, the ECA was rocking, with both sides flying up and down the court under the Friday night lights.

With the scores tied at 12-12 midway through Q1 it was anyone’s game.

Luckily for Newcastle, they had Darius Defoe – who managed to grab the game by the scruff of the neck with a number of powerful scores to put the Eagles in control of the contest– the score sitting at 25-18 when the whistle went on Q1.

Q2 started in similar fashion to Q1 – Newcastle turned the ball over and were duly punished by Leicester.

Then, another quick score from Leicester Guard Kyron Cartwright meant that the Eagles seven point lead had suddenly evaporated leaving coach Macleod to call a timeout.

From then on it was a back and forth contest, with both sides eager to take control of the game.

And when the half-time whistle went, it was Newcastle who led the contest 41-35.

After the break, there was probably a hope that the Eagles would start this quarter better than their last two.

Unfortunately, they started in the exact same fashion – another turnover which was followed by another Leicester score.

There was a sense of unease that had penetrated the air of the ECA – with the Eagles inaccuracies and mistakes continuing to let Leicester into the game.

Leicester looked as though they were the home team with the visitors going on a 11 point scoring streak to take the lead 52-46 midway through Q3.

All of a sudden, it was the Eagles who were now chasing the game.

While it looked as though Leicester were primed to run away with the contest – Macleod’s side fought hard to stay in the game.

And when the Q3 buzzer went, Newcastle found themselves down by two points – with Leicester leading 59-57 heading into the fourth quarter.

Q4 started and the ECA got louder and louder thanks in part to Sade Aded Hussein’s game tying free throw – 62-62.

But Leicester were in no mood to let the home side regain the lead, with the visitors swiftly taking control with two quick scores before some strong defence halted a number of Eagles attacks.

With just five minutes left, coach Macleod called a timeout with the Eagles trailing by four.

Straight out of the timeout, the Eagles managed to cut Leicester’s lead to two thanks to some excellent shooting from Mike Morsell but time was beginning to run out for Macleod’s men with the visitors keen to frustrate the hosts.

And while a moment of sheer brilliance from Kai Williams got the crowd to its feet late on, the third quarter slump proved to be the Eagles undoing as they eventually fell to a 76-69 defeat at the hands of Leicester.