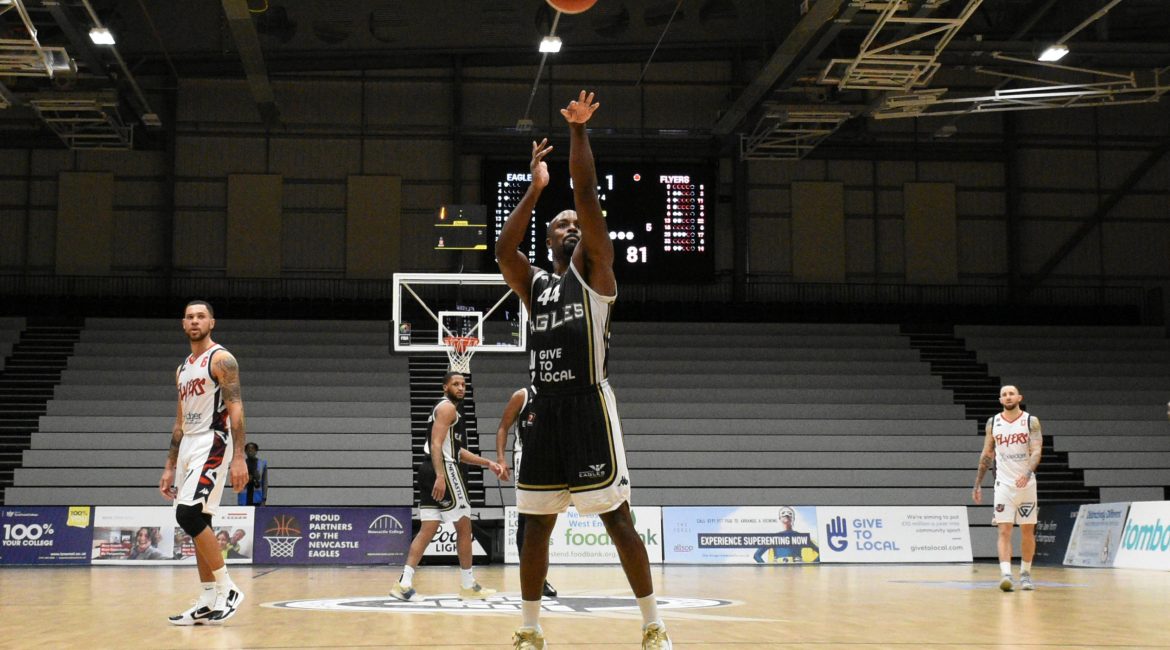 Another win last Friday night against Bristol Flyers by 88 – 83 in the BBL Championship was a great way for Newcastle Eagles to end a successful week. A win that took their season record in the league to 8 – 2 and kept them firmly in the title race.

It was their second win of the season over the South West outfit having shot down the Flyers in the quarter final of the BBL Cup at the Eagles Community Arena in December on their way to lifting that particular Trophy for the sixth time in franchise history just over a week ago.

Ironically, it’s Bristol they face again tonight for the third time in a third different competition but this time on the road as Newcastle begin their defence of the BBL Trophy. A trophy they raised after a terrific battle against Solent Kestrels in what proved to be the final game of the curtailed 2019/20 season.

Captain Rahmon Fletcher knows that it’s going to be another tough encounter down south as he looks to guide his side to the next round as he reviewed last week’s games and looked forward to tonight’s clash.

“Bristol knew on Friday we’d won the Cup Final so it was extra motivation for them to take away our momentum and energy that our win had given us. They’re a tough team. Well organised, well coached and run by a good point guard but we came through and got a good win.”

“We had the game won but let them back in at the end and we have to figure that out. It’s one of those things that we get a little bit comfortable and a little bit complacent and that’s a learning curve.”

“We’re still a fairly new team when you look at how many games we’ve played together we’re still developing and learning all the time but I think it’s one thing we need to iron out and I’m confident we can.”

Eagles in form forward Justin Gordon led all scorers with 23 last Friday but it was the ever-burgeoning impressive back court pairing of Cortez Edwards and Fletcher that paved the way for the Eagles latest win but Fletcher knows it’s going to be tough going against Flyers again so quickly.

“It’s typical BBL. In the play-offs and the NBA when you win the finals you’re done for another season whereas here you can play in a Cup Final on a Sunday, a regular game on a Friday and then another Cup game on a Tuesday.”

“It’s a bit of a rollercoaster but it’s something our guys are getting used too and the more the games come around the more you adapt to it and to be honest when you consider everything that’s going on we’re just happy to be on court and playing right now.”

Edwards and Fletcher combined for 38 points, 16 rebounds and 19 assists last Friday in another decisive performance together that makes them the most feared duo in the BBL at the moment. Something Fletcher is hoping will continue.

“We have a great understanding and it’s a respect thing. I respected him so much when he was at Worcester and I’m glad we’ve got him on our team this season. It’s something that we’ve been trying to build, having a tandem like this on court.”

“If I come out of the game or off the ball it’s having that other person that can handle the ball and the pressure. I respect his game a lot. The things that he can do and bring to the table. When you play basketball with a lot of players someone like Cortez just makes it easier.”

Eagles go into the game tonight on the back of a long trip but in great form and with confidence high with the run they are on. But Fletcher is aware of the threat their opposition carry.