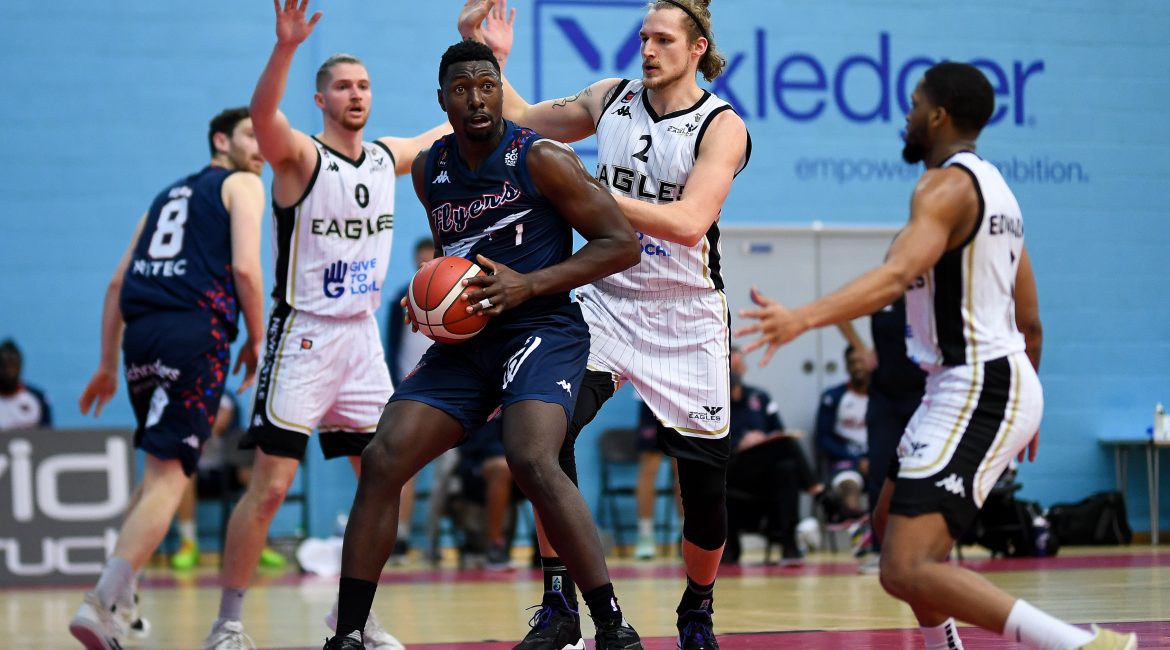 Resilience is a word often used but seldom can it have been more appropriate than last night down in Bristol. It is how to describe Newcastle Eagles sensational come from behind win that sees them begin the defence of the BBL Trophy this season.

Togetherness and playing for each other have also been the hallmarks of this Eagles side this season. They certainly showed that in abundance as they came back from a 19-point deficit to take the win on the road by the narrowest of margins.

It was ice-cool Captain Rahmon Fletcher that sealed the win from the free-throw line with only three seconds left to play with the two points that also made him the game’s high scorer. Bristol had one last chance to knock Newcastle out of the competition but Justin Baker’s shot fell short.

So, the Eagles advance and will take on the winners of the London vs Leicester clash in the competitions quarter final stage. For so long on the night it didn’t look like that was going to be the case but once again the visitors came up clutch at the death.

Newcastle did lift the BBL Trophy last season in a titanic final against Solent Kestrels up in Glasgow. That game proved to be the last one of the ill-fated curtailed 2019/20 season meaning that the Trophy sits alongside the BBL Cup which Newcastle won less than a week ago.

The two trophies can for the time being remain sitting side by side in The Eagles display cabinet after Fletcher led his side to a dramatic last-gasp victory following a commendable comeback.

It appeared that the long journey through the bad weather had gotten to Newcastle in the early going as they certainly seemed to have left their legs on the bus after a torrid first quarter. Bristol flew off the runway and hit the Eagles from deep netting six triples inside that first ten minutes.

Head Coach Ian MacLeod’s men were haemorrhaging points at an alarming rate as they couldn’t see to stem the flow from the impressive home side that ended the first period 30 – 13 up and looking set for a famous victory.

But slowly the Eagles recovered and came back. Their defence switched on and began to shut the Flyers armoury down as they made strides of their own at the opposite end. A much improved second period saw the Eagles claw their way back into the game with every possession.

By the half they only trailed by six at 41 – 35 and Fletcher, Cortez Edwards, Justin Gordon, and the defensive colossus that is Darius gradually pulled them even further back. As the third period wound down, Fletcher capped an 8 – 0 run that gave his side a 56 – 54 lead.

The first time Newcastle had been in front since Gordon’s triple had given them a 3 – 2 lead way back at the beginning of the game. The Flyers were now in a dogfight as the two sides battled for supremacy.

Josh Wilcher netted back-to-back triples for the home side, one with the last play of the third quarter and one to open the final ten minutes as Bristol eased back in front. But Fletcher and his Eagles were not to be denied as the game ebbed and flowed towards its conclusion.

Baker who had only scored two points all game suddenly became a factor and his five late points edged the home side back in front. Time-outs from both coaches followed to set-up the final dramatic plays.

Fletcher was trusted by his teammates and Coach with the ball and drew the foul from Ben Mockford in the act of shooting to give him the opportunity to seal the deal and the Eagles talisman and Captain played his part to perfection to take his side through to the next round.