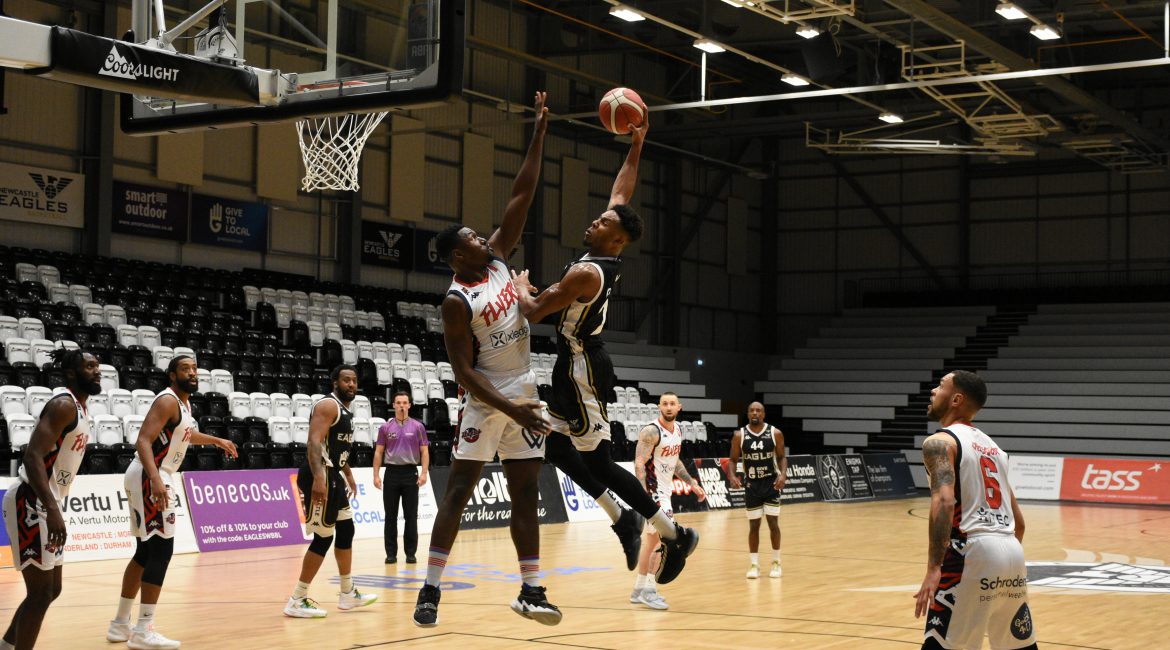 Talk about breaking the curse of the Coach of the Month award.

Since Ian MacLeod deservedly clinched December’s prize for the most coveted playcaller it’s been business as usual for the main man in black.

A 5-1 record in January — including the small matter of a BBL Cup win — means it’s impossible to look beyond SuperMac for a second successive monthly gong.

Last night’s 88-83 win against Bristol Flyers took Newcastle Eagles back to the summit of the BBL Championship table.

And the first of seven games in 22 days could hardly have gone better for the focused hosts ahead of Tuesday’s rematch in the South West.

Newcastle cruised to victory the last time the two teams met as MacLeod’s men saw off a late Bristol rally to clinch a comfortable 72-64 win in December.

But the Flyers’ 3-5 league record prior to their trip north was no reflection of a side stacked with talent.

Big men Daniel Edozie and Marcus Delpeche had combined for an average of 27 points and 14 boards in Bristol’s previous eight league games.

And Great Britain guards Ben Mockford and Teddy Okereafor arrived on Tyneside determined to test the mettle of the BBL’s most dangerous backcourt pairing.

Their predictably titanic tussle with Rahmon Fletcher and Cortez Edwards was just one of the fascinating sub-plots which underpinned a full-throttle start to a fast-paced clash.

But not for the first time this season the big story was Justin ‘Flash’ Gordon and the BBL Cup final MVP picked up where he left off during a stellar first period.

Thirteen points — including a monster jam and five from five from the field — paced the in-form American’s impressive performance.

And he wasn’t alone.

But of all his early dishes it was a delicious pass inside to Edwards which proved to be the pick of a typically pinpoint bunch.

Bristol might have struggled to contain Fletcher’s trademark productivity but the Flyers’ offence was firing on all cylinders.

And the visitors were unfortunate to find themselves trailing 27-26 after a thrilling opening 10 minutes.

Newcastle kept their noses in front throughout the second period but it wasn’t until 90 seconds from the half that the hosts finally opened a double-digit lead.

Gordon had moved to 18 personal but once again it was Edwards’ all-round game catching the eye.

The BBL’s reigning Player of the Month claimed an MVP 15 points, 11 rebounds and eight assists against Bristol in December.

Six weeks down the line and the irrepressible Edwards repeated the trick — adding 12 boards and four assists to his 20 points.

If the Flyers had been working on how to clip the wings of the Eagles’ Mr Consistency then their pre-game plan required a rapid revision at the half.

And then there was the prickly question of how to prevent Gordon stealing more post-match headlines. Or how to force Fletcher into a corner.

Bristol coach Andreas Kapoulas is a canny tactician but countering Newcastle’s on-fire triple threat has taxed far greater minds than that of the GB assistant.

The Eagles maintained a comfortable cushion on their way to clinching the third quarter 21-18.

And if a slow burning period lacked the spark of the previous two then that man Fletcher still managed to add another highlight to his ECA showreel.

Sneaking inside, before taking a quick step back, the Newcastle skipper schooled a stuttering Justin Baker before dropping a soft-handed two with time and space to spare.

Fletcher took a double double of 12 points and 13 assists into the fourth quarter and, with their captain fantastic calling the shots, the hosts must have felt confident of finishing the job.

Some poor decision making down the stretch made the Eagles’ job tougher than it needed to be but MacLeod heads to Bristol next week setting the standard from the sidelines in only his second season at the Newcastle helm.