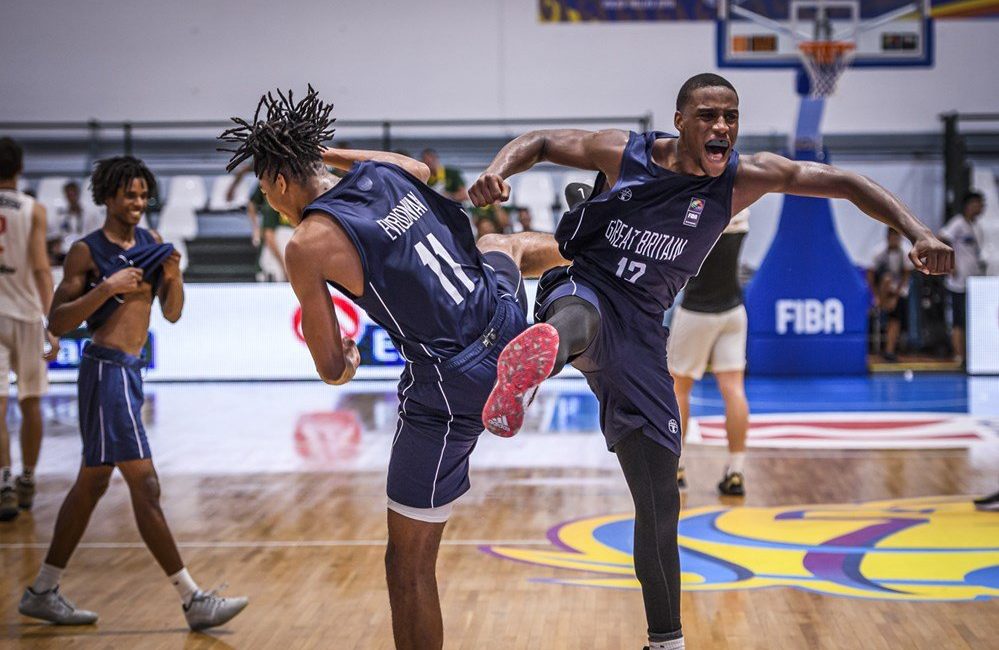 Two Eagles have flown to to the FIBA Under-18 Men’s European Championships with our national team this summer and produced a stunning 87-85 overtime win against over reigning champions Serbia yesterday.

Our Eagles Academy star Tosan Evbuomwan (pictured wearing jersey number 11) finished as the second-top-scorer of the clash, in part from his lay-up with 23 seconds of regulation time remaining to tie the game at 77-77 and send it into the extra period at the Portaria Hall in Volos, Greece.

Watch the full game on the GB Basketball Facebook Page:

The GB Under-18s didn’t have the start they would have liked after going down to a 102-61 defeat in their opening game to Turkey on Saturday, but have made up for it in an impressive victory a day later.

Eagles coach Ian Macleod is proudly assisting on the bench for GB as his EABL team member, a recent graduate from our academy heading stateside next month, Tosan Evbuomwan took his place in the starting five against both Turkey and Serbia.

For both it continues their basketball education, but for Evbuomwan in particular it is something to savour before his basketball talents and academic ability take him to NCAA Division 1 Ivy League College Princeton for 4 years at the end of August.

Before heading out to Princeton, Evbuomwan was relishing the chance to play in the European Championships as part of the GB squad.

“I’m looking forward to the Euros. I had the privilege of playing last year in Latvia and I feel my game has improved and matured a lot over this season, so I’m excited to show what I can do.”

Watch highlights of Tosan in action against Italy:

Then after a couple of weeks rest it’ll be off to the USA to attend a storied University that once also housed ex-Eagle Kareem Maddox who Evbuomwan has been in touch with and got some good inside advice on collegiate life.

“I’m really looking forward to the next 4 years. This is something I never imagined would happen, until less than a year ago I had no plans to play in the NCAA or even study abroad, but now everything is happening so quickly.

“My coach, Ian Macleod, reached out to Princeton as I had identified it as a school where I am able to play basketball at such a high level and continue my education at such a prestigious academic institution.

“There were other schools that Coach and I were in contact with, although after my visit to Princeton I knew it was the right one for me.”

Evbuomwan’s journey has been a rapid one after only started playing basketball in his teenage years.

“I started playing basketball just over four years ago and the last two years in particular have been really good for me and my development. I feel I’ve learnt and improved a lot this year, playing for the Eagles Academy for Coach Macleod coupled with my role for Team Newcastle in the NBL.”

As for life in College? This level-headed and mature young man has no doubts that it’s not all about the basketball.

“I plan to major in economics, and the academics are absolutely as important as the basketball. I’m not entirely sure what I would like to do after graduating, although I would like to be in a position where I have the option to play professionally, as well as the option to work in the financial sector.”

In closing Evbuomwan was quick to praise those people that have helped him create this wonderful opportunity which all at Newcastle Eagles and the North East Basketball community wish him well in.

“I’d like to thank all my teammates, family, friends and coaches for their support and guidance, notably Calvin George, Ian Hewitt and Alan Keane for last summer and his continued support. Plus of course Ian Macleod for this year and last summer.

“Also, my dad, who has been relentless with his love, advice and support. I can’t thank him enough for the huge role he has played in my upbringing and all the sacrifices him and my mum made for me to be in the situation I am today.”

GB’s third and final group stage game of the championship is today against Germany at 12:30pm (UK Time) and can be watched live on the GB Basketball Facebook Page.