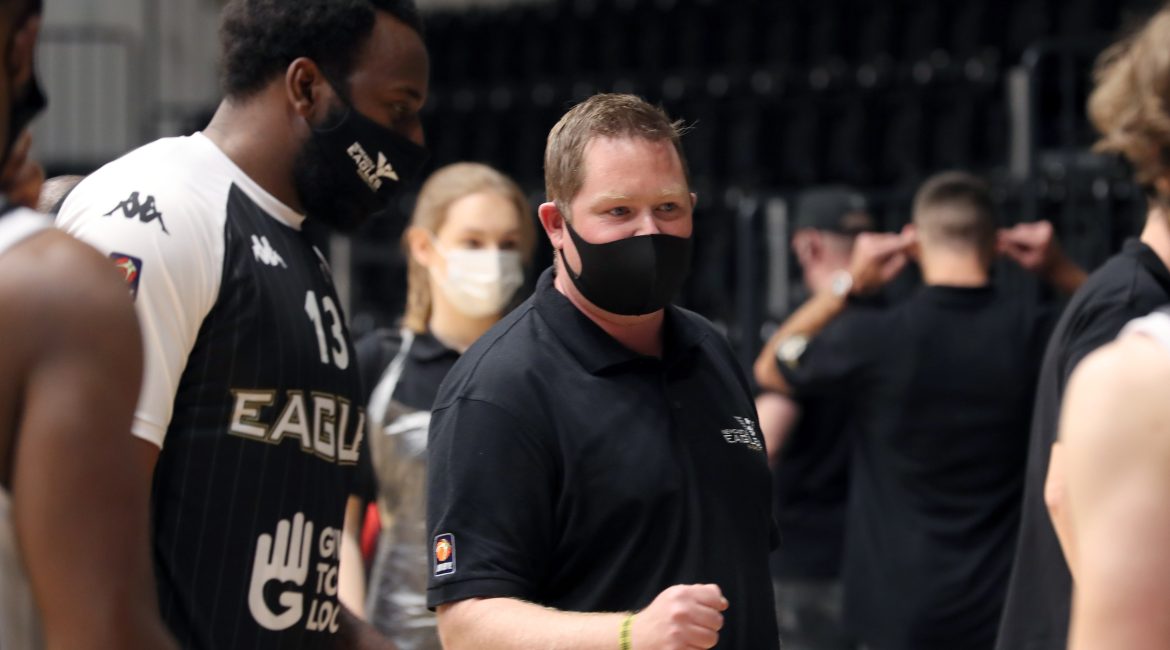 “Cohesion,” was the other oft dropped word as he summed up the performance the morning after.

With the COVID situation forcing a local lockdown in the North East, the game which had been due to be an indoor pilot event for 800 spectators had to eventually be played behind closed doors. A real shame as the two teams served up an entertaining game which would have delighted a watching audience.

The Eagles had won the final game of the aborted 2019-20 season lifting the BBL Trophy in the process and picked up where they left off by taking the victory in the first game of the 2020-21 season albeit a pre-season friendly.

“First of all, we were very pleased to be back on the court and get basketball going again in the country”, said MacLeod pleased with his side’s efforts on the night.

“I never planned to play the starters too much and was always going to have a lot of rotations throughout the game.”

“It was more about the players getting on the same page and learning about each other’s tendencies and I was extremely happy with how that turned out.

“We were all about cohesion and it was a really nice step in the right direction to establish a style of play that we’re trying to build.

“The next things were to spread the workload and we did that with the scoring well shared and the rebounding as well.”

On the rebounding front the team shared 41 amongst the roster with Gordon and Rex Pleugeler pulling down six apiece to lead the team. It was a good night’s work for MacLeod’s new men in particular.

“When I recruited the team, it was what I had in mind with all players being able to contribute across all areas. It’s about recruiting the person as well as the player”, the head coach added.

“We did due diligence on all the new guys coming in and we got good references about their characters as well as their playing abilities.

“We didn’t just rely on one guy, there’s was different players stepping up at different times.

“It’s not just about the players either. Our backroom staff are new and have already added to the whole scene.

“To produce a cohesion and togetherness after only three practices together was great to see and a real step forward and really pleasing to see.”

Tougher tests may well lie ahead of the GiveToLocal backed new Newcastle Eagles in 2020-21, but this was a really positive and encouraging way to start the new basketball season on Tyneside.