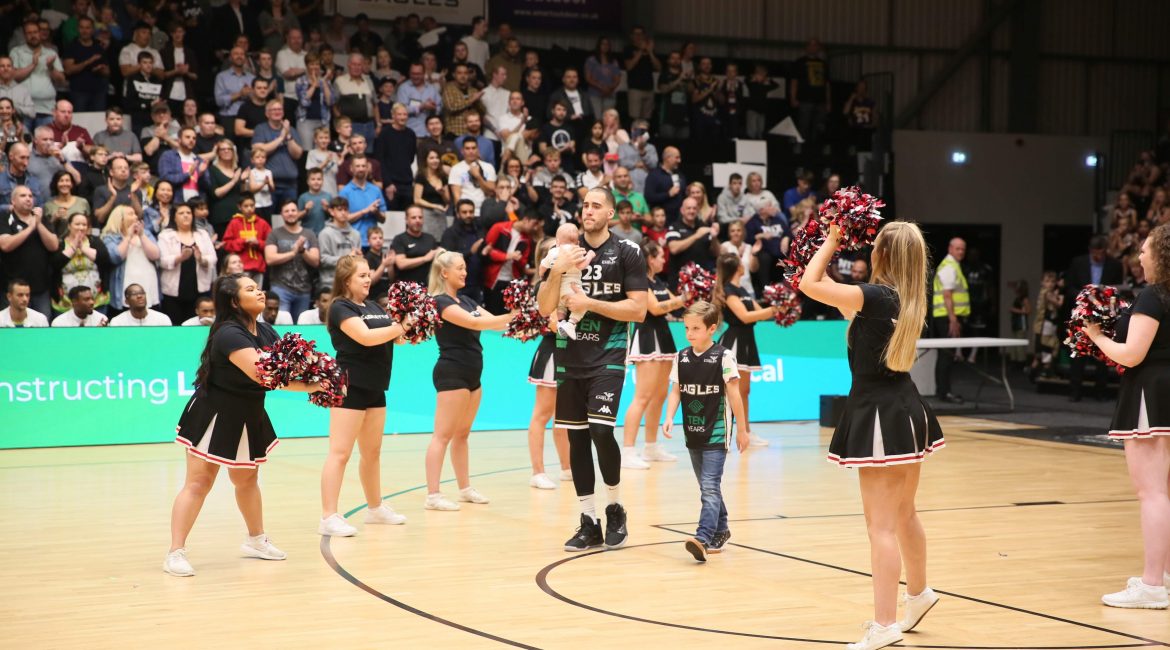 It was an exceptional weekend and start to the basketball season for Newcastle Eagles as they saw off Cheshire Phoenix at home and then went to Glasgow and took victory over the Rocks.

Whilst the main plaudits and talking points of the Eagles’ performances revolved around imports Rahmon Fletcher, Mike Morsell and John Mitchell there were solid supporting efforts from all the players on the floor.

None more so than Kai Williams who shrugged off an injury to contribute vital minutes for his side enabling others to get rests and stay fresh. Williams is in his third season with Newcastle and was delighted with his side’s start.

“Obviously to go 2 – 0 any weekend specially to start off the year is nothing but a good thing. I think it was a good start especially with us only having a seven-man rotation. Guys were having to play different positions to what they’re probably going to have to play most of the year.”

“It was very promising going forward knowing we can step up when we have five healthy bodies to eventually add as we go on. Definitely very happy, all the guys are really happy that we came out with two wins.”

“It was a really strong performance at home followed up be a really nice gritty win on the road. I’m really thrilled with the weekend and proud of the guys for being resilient especially on Sunday.”

Williams himself didn’t light the stats sheet up with his numbers but there’s no doubting that his presence and contribution contributed greatly to the Eagles success given his own circumstances and fitness.

“To be honest it was probably the worst-case scenario for me this weekend only having seven guys. I probably had to play a few more minutes than I would have liked coming off a bit of a back injury. I’m just happy I could contribute in whatever way possible to help us be successful.”

“Whether that was to play more minutes or to be a voice or provide whatever. Just as long as the team is successful, I’m happy to contribute in any way possible. I think personally this weekend was a step back personally for me fitness wise.”

“I’m pretty sore right now and the bus trip there and back didn’t help but that’s things we can’t get away from. I’ll have a nice physio appointment and just revaluate the situation daily. It helps that we’re probably going to add three more bodies for this weekend’s game.”

“Themba is back practising and Nick looks like getting his clearance through and Sauveur was also practicing. I just need to talk with Ian MacLeod and talk things over. It’s only September so there’s no point in just trying to get through anything. I need to take care of myself to be ready to go.”

It’ll be Glasgow Rocks again for the Eagles next but this time at home in The ECA on Friday night and with possibly more players available and a win over their rivals already in place, Williams is feeling confident.

“They were in a similar situation to us in that they had a few guys that were unable to play. We know what their guys that did play are capable of. The new guys will be a little bit of a dark horse for us as we’ve not played against them and they haven’t really played in this league.”

“We had an unbelievable game up there and both teams will reload for Friday. With the history of the two teams every time we play each other we’re both going to give it our best shots so it’s definitely going to be a battle.”

“The guys are looking really sharp and full of energy in practise and there’s a great buzz about us at the moment so we’re all looking forward to keeping that going this weekend.”