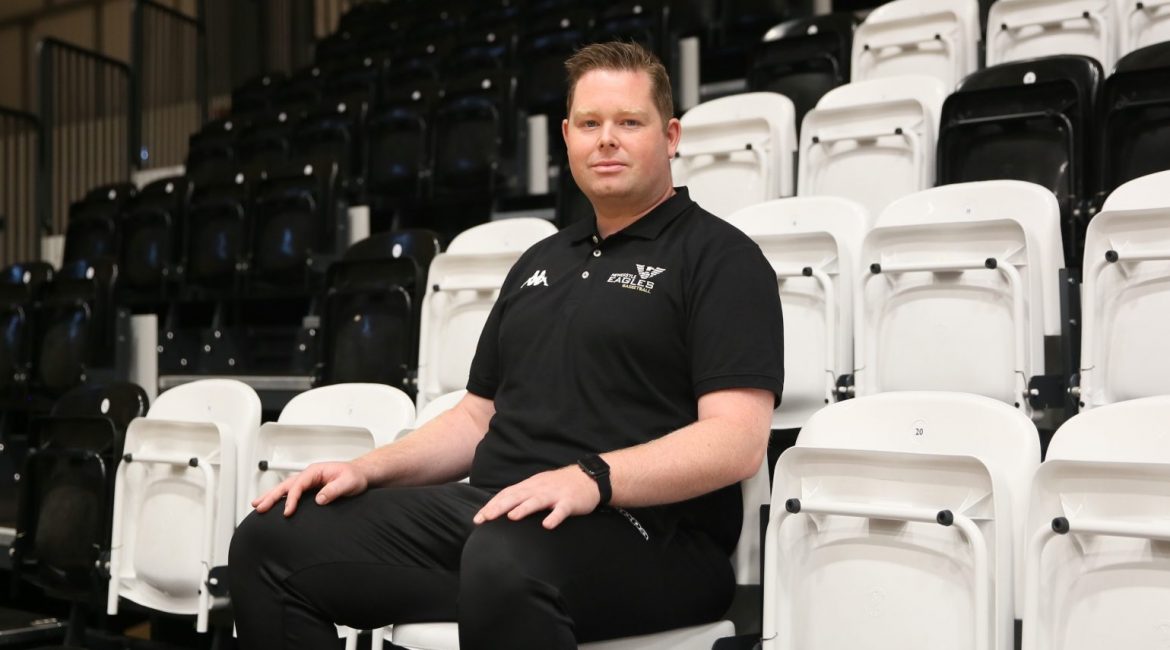 At 08:00am on Friday 6th September a new chapter in the story of Newcastle Eagles unfolded as Ian MacLeod was announced as Interim Head Coach in place of the departed Fab Flournoy. Just over 12 hours later he’d presided over his first game in that role against BBL opposition.

It may have only been a pre-season game with neither side yet at full strength but the Eagles 86 – 80 win over Worcester Wolves meant that the official MacLeod era had started in the right vein.

“It felt good to get that first win. Not so much because of the scoreboard, that’s nice and that’s a bonus but we did some really good things in that game. The outcome was fantastic but we showed some signs that things are really gelling and good cohesion.”

“It’s about building. Soon we’ll put a quarter together, a half together and a game together. That’s what pre-season is for. The result was pleasing of course as it’s nice to get the first one but the real joy is coming from the players gelling and that’s the key.”

It’s obvious to all that MacLeod has big shoes to fill but after all the media interest during the week he felt it was good to put that first game behind him and concentrate on moving forward and progressing.

“It was nice, really nice to have the game and I’m looking forward to getting back to normality whatever normality may be in my new role. But weirdly I quite enjoy the grind. I enjoy the middle of December and the middle of February when you’re grinding out games and practice sessions and you’re in it.”

“I’m really looking forward to that. With regards to filling shoes. Fab was a legend in every sense of the word so I guess I’ll bring my own shoes.”

That comment says a lot about MacLeod’s confidence in his own ability and approach. He knows he’s his own man and must follow the instincts and abilities that clinched him the job and not worry about what’s been left behind.

“The reaction to my appointment has been really pleasing. I’ve had a lot of nice messages from people within the community, players that I’ve coached a few of whom turned up tonight to support me. Coaches from other countries that I’ve got a relationship with.”

“There have been a lot of good wishes and messages. It’s a real community feel and now we’ve got a community feel with the pro set-up as well, it’s a nice link.”

So, a win over Worcester and now a week’s worth of coming to terms with the role, conducting practices and preparing the team as it’s off-court leader before this weekend’s home and away preseason clash with Sheffield Sharks.

One of the players who only came in the day before the victory over Wolves and only had one training session was 6’ 6” small forward Mike Morsell. The University of Towson graduate not only thrilled the Eagles fans with his debut but pleased his new Head Coach also.

“He did an excellent job, he really did. He’s a great guy which is excellent and he’s a good culture guy. He picked up things very quickly and you can tell he’s a student of the game. He understands lots of different aspects of the game and he looks like a good guy to be around.”

“He’s got good body language, he’s a competitor and that’s as important as putting the ball in the hoop for me. I’m trying to build a good culture here and that’s the first mission to put a good culture in place that’s conducive to winning and he looks like he can be a part of that.”

One thing that should also be noted is that the game was won without either of the announced big men playing any minutes with Sade Hussein carrying a little knock and not being risked and John Mitchell not yet arrived. It shows the team can already adapt to a given situation.

“Definitely a bonus winning in the way we did but I’m looking forward to getting everyone in and fit. Obviously, we want that to happen as soon as possible but we’re not going to rush Sade back.”

“One thing I will say about Sade was he did a fantastic job of supporting the team from the bench and that showed how receptive the guys are to that communication and culture. It shows how willing he is to make this work. It was really good to see even though he wasn’t kitted up.”

So, first game over and official press launch over this is now MacLeod’s team going forward and going forward it is Sheffield Sharks next into the Eagles Community Arena this Friday night at 7:30pm before the Eagles fly down the A1 on Sunday for the reverse fixture.

“We have to balance that with their duty as players on court as well. So, it’s going to be their first taste of the whole package with the Eagles and it’s something to really look forward too and trying to get them to understand the normality of life at Newcastle.”

“I’m 100% excited about the whole thing. I do pride myself on not getting too high or too low with the emotions. But cards on the table, I’ve wanted this for 18 years and there’s a lot of people who have heard the words ‘sorry I can’t I’ve got basketball,” from me for the last 20 years.”

“There have been a lot of sacrifices along the way so the support of my wife, my family and everyone has been great. It’s nice to get an opportunity but I’m also fully eyes open that it is an opportunity and it’s not something I’ll take for granted.”

I think it can easily be seen why Managing Director Paul Blake has turned to Ian MacLeod to guide the senior side and give him this wonderful opportunity. Clearly MacLeod has the vision, work ethic and drive to make it work for himself and the Newcastle Eagles.