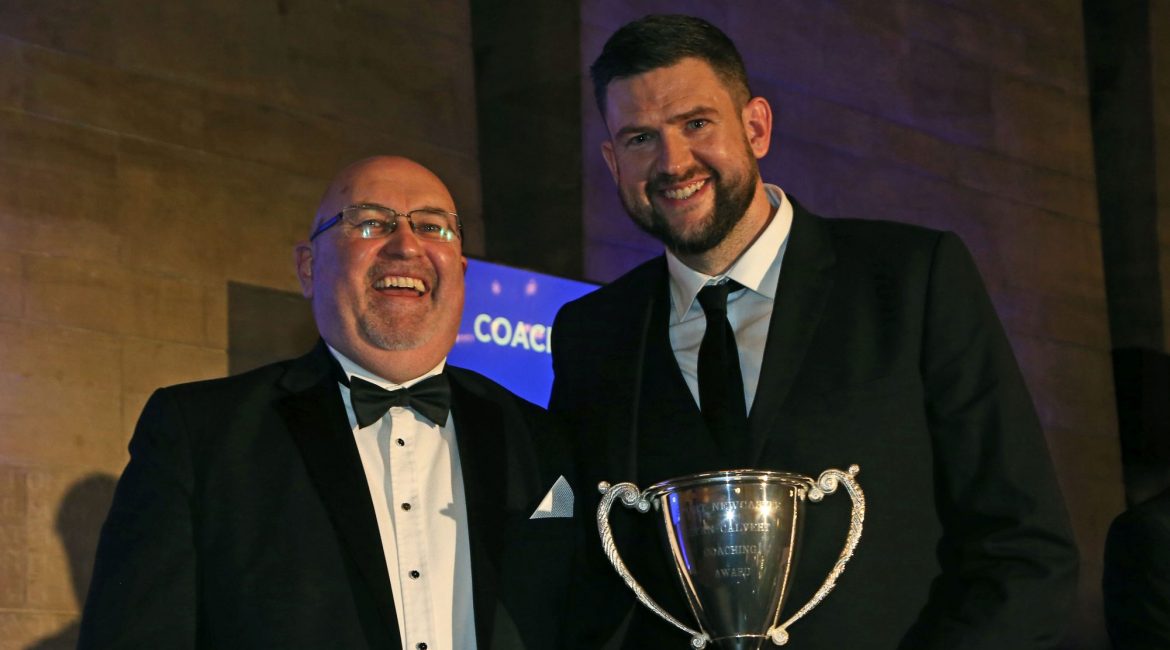 Marc Steutel bids to complete the hat-trick of wins against Plymouth tonight after bagging the biggest coaching honour in North East sport.

And that standout win followed hot on the heels of Newcastle’s impressive BBL Cup victory at Plymouth last month.

But it’s Steutel’s contribution to coaching at national team level that landed the adopted Geordie one of Tyneside’s most coveted trophies.

At last night’s star-studded Sport Newcastle dinner, staged at the Civic Centre, the Eagles’ playcaller took home the Stan Calvert Award for Coaching after leading Great Britain to a series of memorable wins on the world stage.

ITV Tyne Tees presenter Ian Payne told a sold-out audience: “Marc has already proved himself one of European basketball’s top tacticians after steering his country to a series of stunning victories on the global stage.

“The two-time NBL Coach Of The Year was put in charge of Great Britain’s Under 20 roster in 2018.

“And he was quickly promoted to an assistant’s role with the senior squad.

“When GB head coach Nate Reinking was stranded Stateside during the global pandemic, Marc stepped into the breach.

“And as acting head coach he helped Great Britain secure their place at the European Championships and progress to the latter stages of 2023 World Cup qualification.

“And a developing group of domestic stars realised their potential under a passionate, committed and ambitious coach.

“Under Marc, Newcastle has become the home for Great Britain’s senior men’s team.

“Only last week another full house at the Vertu Motors Arena saw the hosts go toe to toe with European heavyweights Serbia.

“And there is the promise of many more nights of international basketball to come at the home of the Eagles.”

Steutel returned to the North East on Tuesday morning following his latest stint with the national team, buoyed by the news that Darius Defoe is recovering well from a hamstring strain.

And with new faces Denzel Ubiaro and Justin Everett settling in well, hopes are high that Newcastle can finally put a disruptive start to the season behind them.

Plymouth, of course, will be out for revenge after suffering double defeat to the Eagles this season and star man Antonio Williams is back in the mix.

The influential point guard has been struggling with a foot injury but returned to action in last weekend’s 88-69 loss to Sheffield Sharks.

And Newcastle’s assistant coach Gary Stronach, who made his name as Plymouth’s playcaller, is expecting another eye-catching clash on Tyneside.

“Plymouth will still be smarting after the last game they played at our place,” admitted Steutel’s number two.

“They will be raring to go and we have to be ready from the start.

“If we can click offensively from the tip — like we did against the Patriots last time out — then we’re a tough team to defend.

“We can score from one through five and have weapons coming off the bench but we need to stay strong defensively.

“We’ve prepared to face a full-strength Plymouth team in practice this week and we’ll be ready for them.”

Tonight’s clash tips off at 7.30pm and a limited number of tickets are still available from the box office.