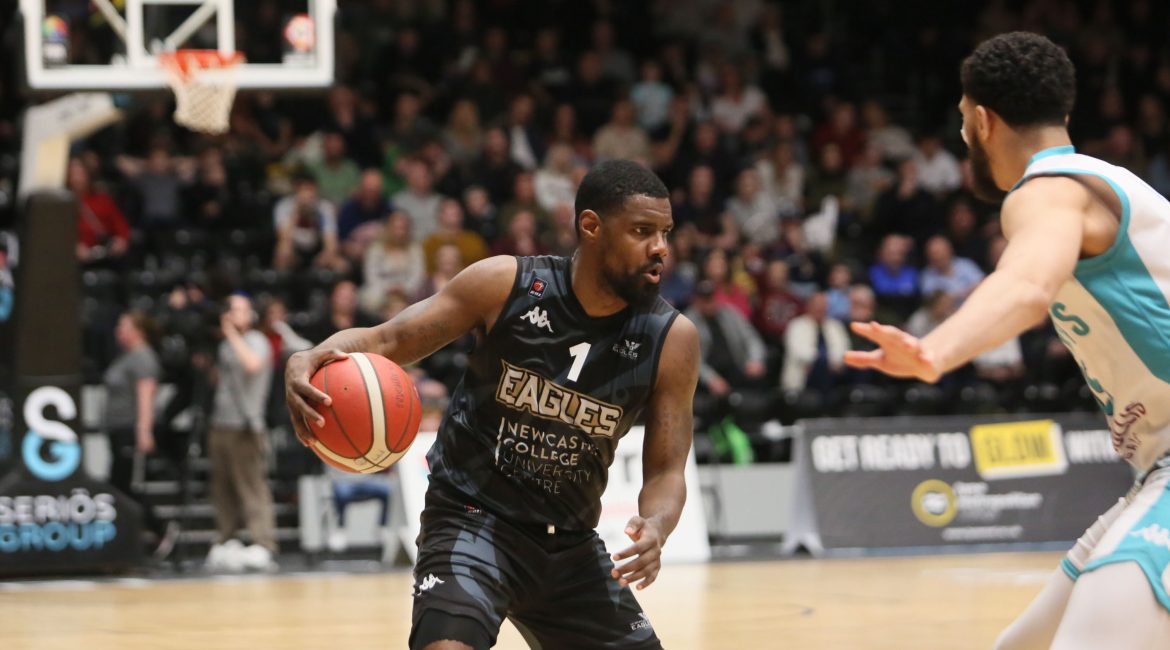 The short-handed visitors had lost twice to Marc Steutel’s men this season but there was no hat-trick of wins for Sport Newcastle’s newly anointed Coach of the Year.

Watch highlights of Eagles vs Patriots:

The Eagles went into battle without prolific shooting guard Javion Hamlet but the return of Darius Defoe offered some hope to the homecourt faithful.

Ultimately, the BBL’s most successful player could do little to influence a frustrating affair as the eight-strong Patriots led from tip to buzzer.

And not for the first time this season Steutel must somehow mastermind a rapid turnaround with next weekend’s BBL Cup tie at Leicester Riders looming large.

Five players fouled out the last time the two teams met — guaranteeing an extra edge to what always looked like a potentially feisty Friday night affair.

Add in the fact that the Patriots were already seeking revenge for those back-to-back losses against the men in black and there was a sense that this could be another explosive clash at the Vertu Motors Arena.

Plymouth’s talismanic guard Antonio Williams missed last month’s showdown on Tyneside but the US star was back in James’ starting five.

And the absence of Newcastle’s leading scorer Hamlet meant the Eagles had it all to do in the backcourt.

This season’s star man returned to the US earlier this week ahead of his partner giving birth to the couple’s first son.

And after Hamlet dropped 31 points on the Patriots last time out — adding eight rebounds and seven assists to a stunning stat line — it was clear the hosts had a big void to fill.

Newcastle had raced out of the blocks three weeks ago to hit 61 points in the first half.

But without hitman Hamlet the Eagles struggled from the start against a well drilled and determined Plymouth.

If scoring was difficult enough then bagging the boards that mattered also proved beyond the strangely lethargic home side.

Time and time again Newcastle were schooled in the paint as a succession of defensive rebounds went begging.

And in spite of a timely 7-0 Eagles burst to close the first quarter, the Patriots led 25-20 after a dominant opening period.

Things only got worse for the hesitant hosts after the restart.

Newcastle were trailing 36-26 midway through the second period when playmaker David Cohn picked up his second and third fouls during a moment of madness.

The normally assured guard conceded a contentious foul under the basket and couldn’t hide his displeasure — picking up a costly technical as punishment.

The Patriots followed up a 10-0 run with another seven unanswered points to lead 46-28 with three minutes remaining in the half.

And although Great Britain guard Kyle Johnson did his best to pick up the pace before the break, the Eagles trailed by 11 points heading into the locker room.

But the latter hardly needed to break into a sweat as he continued his comeback from a foot injury with alarming ease.

Newcastle needed to exert pressure on Williams, pressure in the paint and pressure on themselves to turn around a below par display.

And a convincing start to the second half fired the briefly resurgent Eagles back into contention and within sight of the win.

When Jermel Kennedy’s instinctive reverse pass found Donovan Johnson under the basket, the US forward converted to trim the Patriots’ lead to just three points.

But moments later the latter’s fourth foul of the game — with 14 minutes on the clock — tempered any renewed optimism.

And with six players heading into the final quarter on three fouls or more all eyes were on the whistle-happy referees.

Plymouth led by seven with 10 minutes on the clock and even the exit of Patriots big man Rashad Hassan — who picked up his fifth foul 70 seconds after the restart — couldn’t halt the visitors’ impressive march to victory.

The Eagles are next in action at home on Friday 2 December when Cheshire Phoenix make their first visit of the season live on Sky Sports. Tickets are available now from the box office.

Next weekend Steutel’s men make the road trip to fierce rivals Leicester Riders with the game free to watch on the BBL YouTube channel.