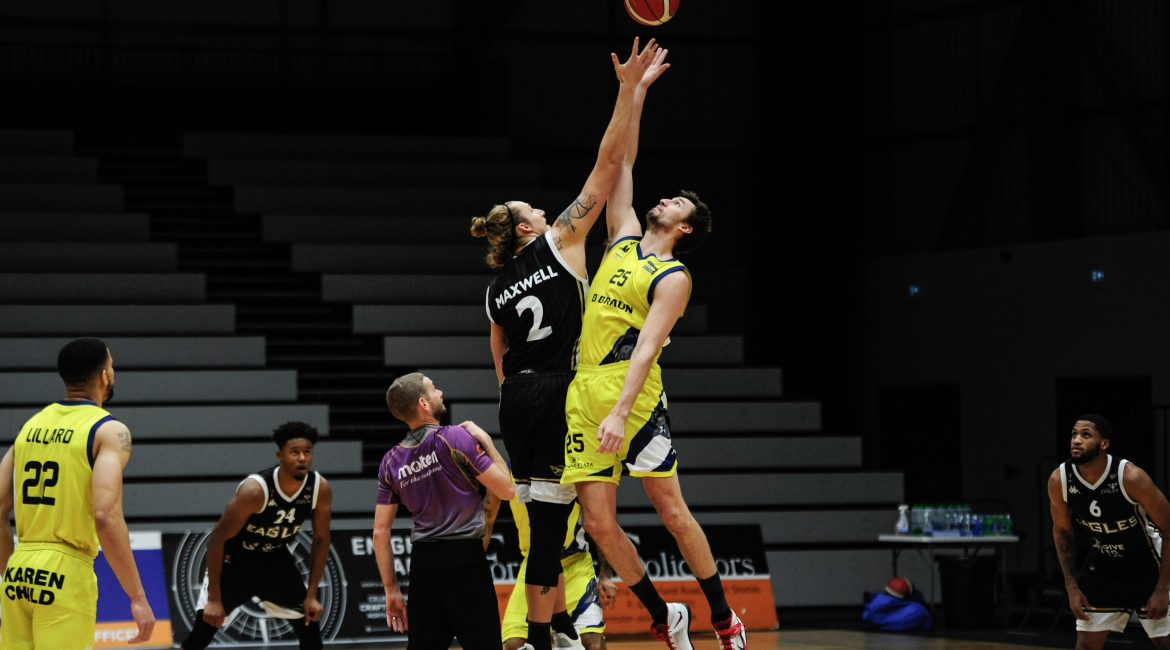 The Newcastle Eagles go into tonight’s BBL Cup Group 3 game at the Eagles Community Arena confident that they can reign victorious over the London Lions and cement their place in the competition’s Quarter Final stage.

That confidence comes from moving to a 3-1 Group record after Tuesday night’s 97-87 home win over Sheffield Sharks and the fact that they have already recorded a win over tonight’s opponents in London earlier in the season.

But as centre Evan Maxwell explained it’s still going to be a tough game where the Eagles have to ensure they are ready for a Lions outfit hunting for revenge. Maxwell started his preview of the Lions game by looking back to Tuesday night.

“It was definitely good to bounce back from a loss. I think we would have liked to have won by more to seal it when we go into next weekend when we play at Sheffield in the second game but it was good to get back to doing what we do.”

“I think we’re still getting our legs underneath us and it’s still very early. We didn’t have a full pre-season so we’re all still trying to get into game shape.

Maxwell certainly looked as if he was getting more into rhythm and answering what Newcastle need from him with an excellent double-double on the night netting 22 points and pulling down 12 rebounds.

“I’m still trying to find a consistent level and get into better shape so nights like that help. I just try to make the best of what I can when I’m on court as it’s difficult when you’re not in the shape you think you are.”

“You can’t simulate game shape but it felt good for sure but I have to give a lot of credit to my teammates for helping me get those results. Fletch (Rahmon Fletcher) and Cortez (Edwards) in particular as well as the other guys had a bunch of assists.”

“Just being able to get into a rhythm with those guys, being comfortable with them on court and us finding each other is definitely a good feeling.”

Turning to tonight’s match-up Maxwell referred to the first competitive game down in London which the Eagles won in thrilling fashion with the game going into overtime. He knows how tough the return fixture is going to be.

“We had a good experience in the first game. It was really early but it was good for us to find out about each other and where we’re going to be. I think tonight we’re going to see a very different team albeit with a lot of the same players.”

“I think they’re going to have a bit of an edge to them especially with us beating them last time. It’s an important game and they’re trying to get rolling. It’s going to be a tough game. I’m sure they’ll play well but I think it’s important for us not to focus on them but focus on us.”

“If we stick to who we are, play together and play the way we play I think we can beat anybody or at least put ourselves in that position. A lot of things can happen, shots might not fall, there might be things out of our control but if we can control what we can then we’ll have a good chance.”

“We want to come out and attack them early and stay with it as they’re not going to go away easy. I think it’s going to be neck and neck just like the last game and I’m expecting them to be consistent.”

“I think it’s about us sticking together whether we’re up or down and sticking to our identity. If we do that then I feel we’ll be okay.”

Certainly, this Eagles side does look very together and very comfortable in each other’s company and they’ll be hoping to keep their good run going tonight when the game tips off at 7:30pm.

Virtual tickets for the live stream are available from the box office.