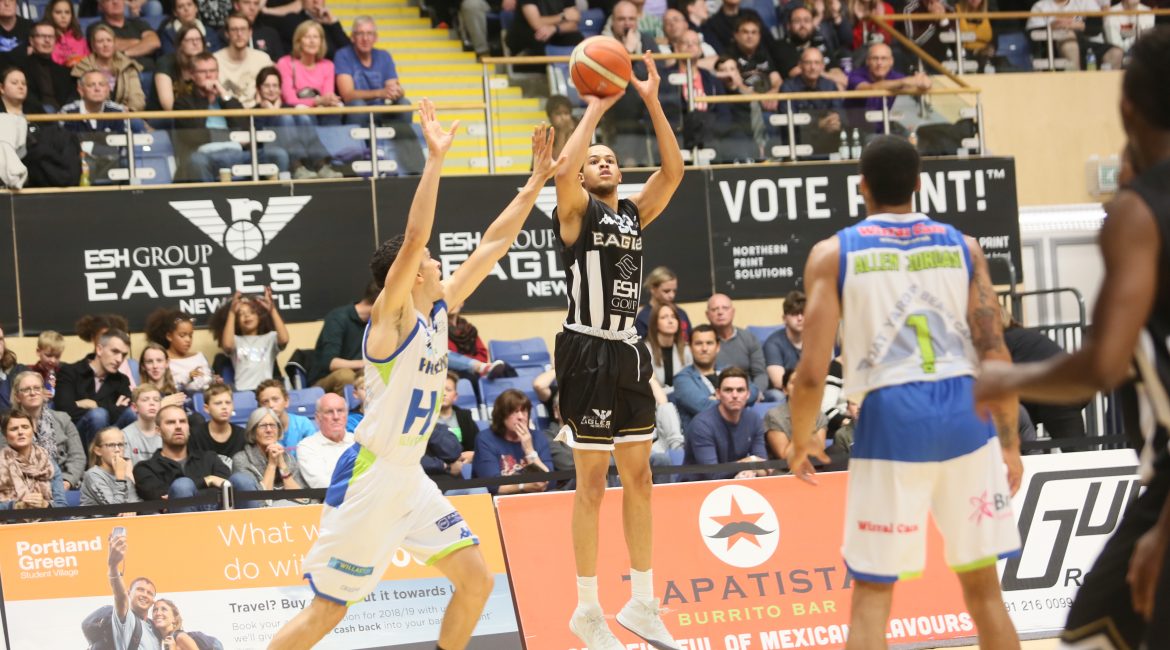 Tonight, sees a huge BBL Championship clash between the two so far unbeaten teams in the league and a game where the result will not define a season but could go a long way towards shaping its destiny, writes Jeff King.

The hone town Esh Group Eagles Newcastle who recorded their second win from two attempts last Sunday at Glasgow, play hosts to the BBL’s newest franchise, London City Royals, who themselves have impressed everyone with an excellent 3 – 0 start to their campaign.

Eagles Assistant Coach, Ian Macleod, is happy with the start the Tyneside outfit have made but also is aware of how tough London are as he assessed tonight’s game.

“The home win against Cheshire was a win with an ok performance with some things we need to get better at, but the road win at the Rocks was a real pleasing one. Not because of the fifteen-point win, but because it was a product of our brand of basketball.”

“It was a good performance particularly defensively. The players did an incredible job of following the scouting report and it was a big step forward as to how we want to play as a team. There was a lot of cohesion there, there was a lot of guys talking to each other on court and problem solving on court.

That was brilliant to see and hopefully we can continue that tonight against London Royals and look to go 3 – 0.”

“Royals have started very well and have done a good job so far. They’ve assembled what I would call a dynamic roster, a lot of athletic guys and some veterans too that bring other things to the table. They’re an interesting team and there’s a lot of hype surrounding them. “

“They’ve got people that are well-known in UK basketball together with good connections and there seems to be a lot of investment there. Everyone in the BBL is interested in them and tracking how they are going to do.”

“It’s important for us to keep our standards high and not get caught up in all that hype. It’s really about us being us and executing. The opposition is really irrelevant. Its about us focusing on us and getting our behaviours and performances where we want them to be.”

Newcastle moved quickly to fill the gap created when Head Coach Fab Flournoy and his coaching staff decided to cut rookie guard Ahmad Thomas and will give new shooting guard Jeremy Smith his debut in tonight’s clash. Macleod spoke about how Smith arrived and what he can bring to the team.

“It was a good situation that fell right for us. Everyone can make a good highlight video but to actually get Jeremy in for a few days gave us a chance to meet the person and not just the basketball player which is important.”

“I think he’ll fit in very well. We loved the fact on his CV that as an import player he was re-signed by his Australian team, that always augers well as it shows he must be a good guy and consistent. We’re looking forward to having him with us, contributing for us and adding to what we already have.”

As far the keys to the game, Macleod highlighted the dangerman but was also quick that the Eagles are very much focused on what they will bring to the game and how they react to what is required to hopefully remain unbeaten.

“Obviously, Matthew Bryan-Amaning has had a great start to the season. I don’t think he’s seen anyone like us before though. So, hopefully we’ll throw some things at him and see what effect they have. Our defence being on point is the key.”

“It’s about having consistent vice-like pressure on the defensive end. We’re just going to try and make guys uncomfortable and hopefully that’ll transfer to our offence and we can get out and run on them forcing them off-balance.”

Tip-off for this blockbuster of a game is at the usual time of 7:30pm at Northumbria University Sport Central.

Get your tickets now to be there for the action:

Can’t make it tonight? You can follow the LiveStats, get score updates on our social media channels or watch all the action home and away this year with a season pass for just £49.99 at LiveBasketball.tv.