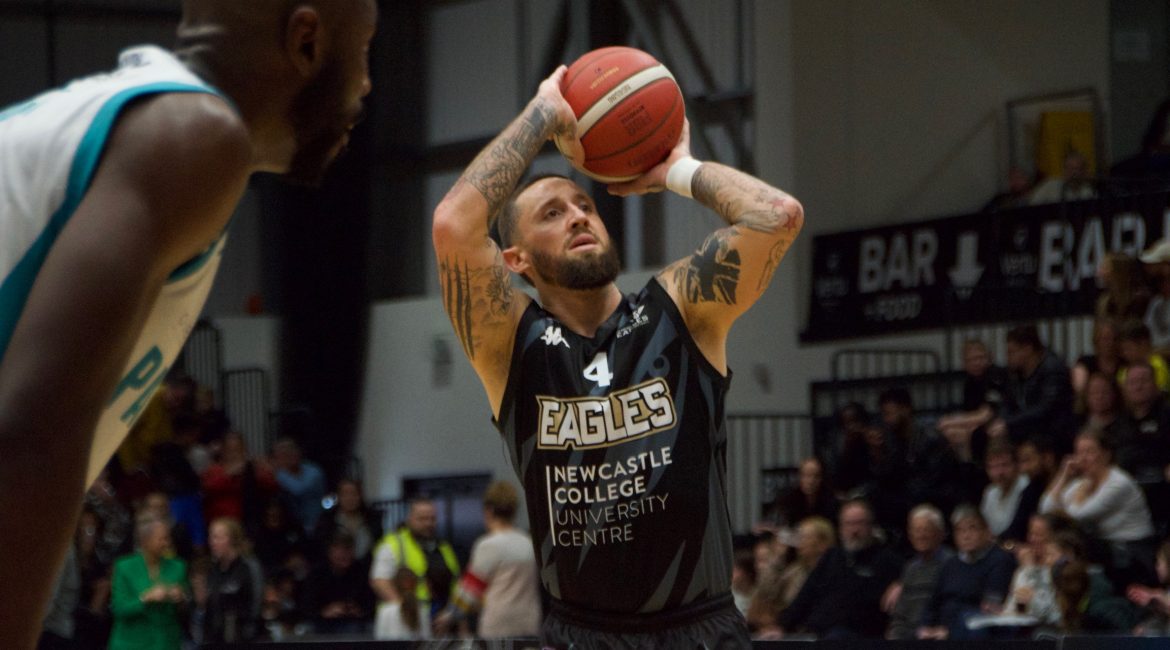 Newcastle Eagles go into tonight’s crucial BBL Championship game against Cheshire Phoenix still looking for that magic formula that will kick-start a season almost a third over.

The Phoenix not only hold down a play-off spot with 5 wins in their twelve games so far in their league campaign they also hold a win over the Eagles. Back in October Newcastle travelled to Cheshire and went close to a road win only losing 80-77.

But since then both teams have significantly changed their rosters rendering that game insignificant as the two sides look to bounce back from BBL Cup disappointment.

Cheshire went out at the hands of London in their quarter final whilst the Eagles lost heavily at Leicester in theirs. Eagles GB International guard Ben Mockford looked back at that game and gave an insight into the team’s mentality going into tonight’s encounter.

“Leicester of course are a great team and always a very strong team in this league. We started the game well and then just seemed to let go of the game plan and just seemed to fade.”

“Against teams like that you can’t do that. You have to play the whole forty minutes to compete with those guys. I think it’s about us maintaining a focus and a purpose throughout the whole game.”

“We were down ten at the half and made a key focus of coming out in the first five minutes of the third quarter and try to get it down to single figures and close. I believe very quickly the opposite happened.”

“They pulled it away, hit some back to back shots and before we knew it, it was a twenty point lead and away at Leicester if you get into that kind of hole it’s very hard to come back from.”

With the ever-changing Eagles roster this season and the international break coming during all of that it’s been difficult for this Newcastle side to settle and gel as a unit. Something Mockford agrees with and acknowledged.

“They definitely played a factor but I think right now the main focus is just working on ourselves, sticking to the game plans and having some core principles throughout the team so we can move forward, get over this hump and start winning games.”

Cheshire Phoenix are a side that Mockford knows quite well and particularly having played under their Head Coach Ben Thomas he feels he knows what the Eagles can expect tonight.

“Cheshire are always a dangerous team. They play very free and are very quick in transition. They have a couple of guards that get downhill fast. But for us we’ve done the scouting and prepared for them all week.”

“Right now though we have to focus on ourselves. If we handle our stuff offensively and defensively I think that’s when the wins will start coming. We’ve had a good week in practice again and we’re trying to learn from our mistakes.

“We’re trying to get better day by day right now and take those practice sessions into games. Do that and follow the game plan and with everyone fit and ready to go we’re looking forward to the game.”

There’s no doubting that the Eagles faithful fan base is getting restless but with the re-build, re-energise message from Eagles owner Paul Blake ringing in the players ears and Mockford’s positivity perhaps tonight is the night a corner is turned.

Tickets are still available for tonight’s 7:45pm tip-off from the box office and the game is live on Sky Sports Mix and YouTube channel from 7:30pm.