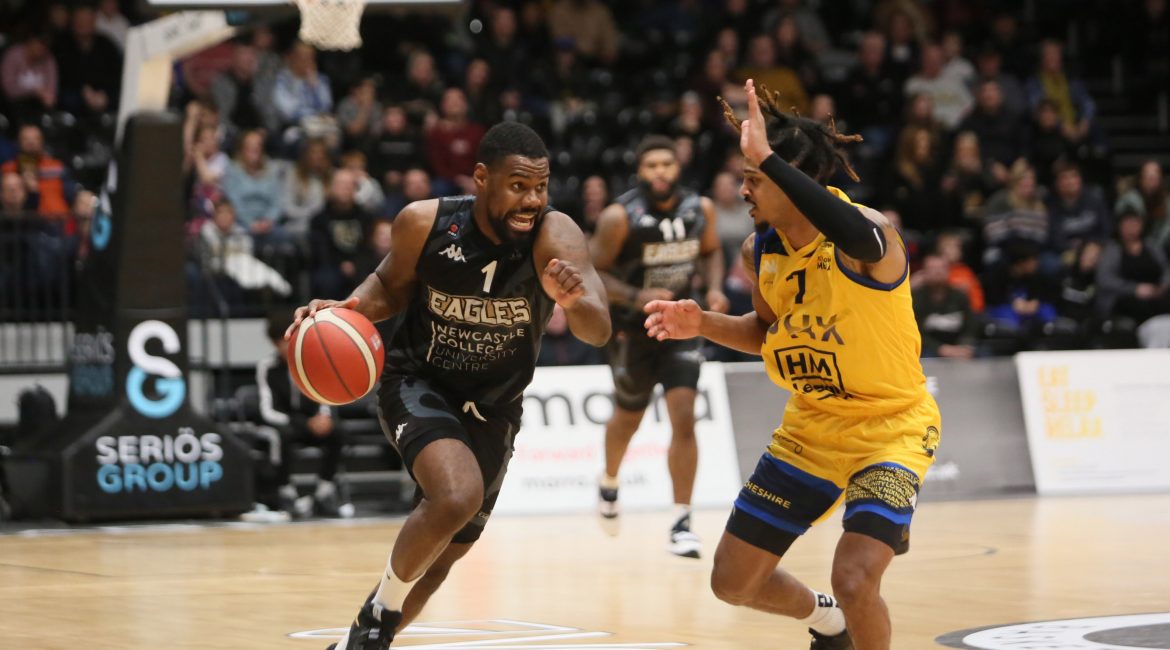 A slow start and a sloppy finish sentenced Newcastle Eagles to a fourth loss on the bounce.

The men in black couldn’t sustain an eye-catching fourth quarter fightback as seventh-placed Cheshire Phoenix eased to victory on Tyneside.

And head coach Marc Steutel must hope new recruit Hasahn French is the player to spark a much-needed mid-season revival as a revolving doors roster continues to take shape.

Prior to tip-off, Newcastle owner and MD Paul Blake had reinforced his commitment to the club-wide reset necessary to put the BBL’s most decorated franchise back where it belongs.

Sensing the need for reassurance, the driving force behind a 16-season run of unprecedented success called for calm and urged supporters to consider the bigger picture.

And Blake pointed to the long-term plan at a time when sections of the club’s fans want nothing more than a confidence-boosting quick fix.

Of course, the Eagles chief knows better than most the transformative short-term effect a victory can have.

And Newcastle’s coaching staff continue to work tirelessly behind the scenes searching for the players and personalities capable of shaping a winning organisation.

The two-time Atlanta 10 All Defensive Team pick arrived in the North East following a stint training with the Raptors 905 G League roster in Canada.

And at a time when the Eagles are in desperate need of a dominant figure in the paint, French looks capable of fitting the bill.

The powerful 24-year-old enjoyed a four-year spell with Saint Louis and tipped off his professional career in Slovenia.

But French was on the bench from the start with veteran Darius Defoe and Justin Everett handed an early opportunity to seize control under the glass.

Ironically, given Newcastle’s well-documented problems inside, Cheshire took a different approach to seizing the initiative against the BBL’s second-bottom club.

The visitors shot the lights out from beyond the arc to finish the first quarter 31-11 ahead — a sensational six from nine three-pointers silencing the Vertu Motors Arena faithful.

Seven turnovers hardly helped the home team’s cause as an error-strewn opening period enabled the Phoenix to take full control.

And by the time French was handed his BBL debut — at the outset of the second quarter — the Eagles already had a mountain to climb.

Scaling that peak play by play was the only answer and, after the worst possible start, Steutel’s men finally found some form.

Donovan Johnson has frequently looked a shadow of his former self since signing for Newcastle but the robust forward was at the heart of much-needed fightback.

Tighter in possession and more direct on offence, the Eagles took the second period 17-10 to trim the deficit to 13 points at the half.

Like Donovan Johnson, talismanic guard Javion Hamlet had started to emerge as a credible scoring threat with some neat plays in the paint.

What the Eagles didn’t need was the off-pace, off-message start to the second half that allowed Cheshire to open up a 19-point lead — another two uncontested triples simply adding to the frustration of fans and coaches alike.

Kyle Johnson overcame an atypically sluggish start to bag eight quick points just as it looked like the contest was finally getting away from the under-pressure hosts.

But this was Phoenix’s game to lose as Ben Thomas’ men took a 12-point lead into the final quarter.

French was back for the fourth period and a crowd-pleasing rejection preceded the kind of defensive hustle Newcastle have lacked all season as the new man battled for possession while flat on his back.

And when the fast-improving Kyle Johnson converted a three-point play, Cheshire’s lead was down to single figures.

As namesake Donovan sank an arcing triple with five-and-a-half minutes on the clock — to close the deficit to five points — Eagles’ fans dared to believe.

But a tentative finish mirrored that disastrous start as Steutel’s men slumped to an eighth league loss of the season.