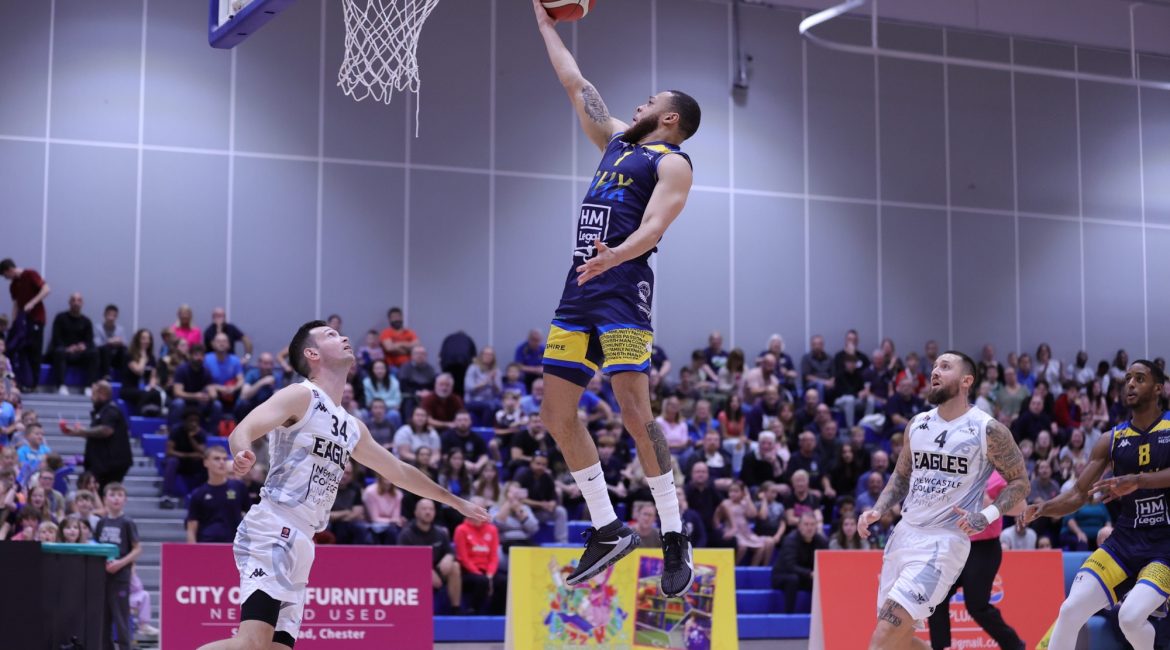 With the all-star heavily stacked London Lions to come to the Vertu Motors Arena this coming Friday, the Eagles are staring down the barrel of a three-zero start to the 2022/23 campaign. However, results alone don’t tell the full story.

Friday night’s loss at home against Manchester had seen Steutel’s men right in the game until the final quarter and it was the potential shown in those first three quarters that had given them hope for last night’s game against Cheshire.

But although they put in a better all-round performance and once again highlighted that they have a roster that should win more than they lose, they still came up just short. Indeed in a game where they never ever led at any stage they ended up with a shot to take the game to overtime.

It didn’t happen and now the Eagles have a few days to draw breath, contemplate their two competitive games and assess what they need to address before the Lions come roaring into Toon.

Cohn Making The Most of Terrific Tyneside
October 9, 2022

Eagles did have Jermel Kennedy available for last night’s game after the ex-Worcester Wolves player missed Friday due to a back injury. It stretched their roster and rotation options and did make a difference to the way they approached the game.

Steutel though went with the same starting five as Friday and similar to Friday saw his side get off to a tentative start as the Phoenix inspired by GB’s Jamell Anderson, a player the Newcastle Coach knows well, inspired his side to a 9 – 2 opening.

Steutel rotated veteran Darius Defoe in place of Branden Aughburns and initially that switch made a difference as Newcastle produced a 9 – 2 burst of their own to level the game. But back came Cheshire with yet another 9 – 2 run and despite the visitor’s stopping the rot, the home side took the first ten minutes 26 – 17.

Lloyd Daniels had shown well for Phoenix but Defoe had made a difference and his Captain efforts helped his side to maintain parity throughout the second period which they took by a point to go into the locker room trailing 43 – 35.

They needed a good third quarter but Cheshire’s Tahjai Teague had a huge ten minutes at one stage pushing the Phoenix out to a 13-point advantage at 54 – 41 as Cheshire opened strongly.

Javion Hamlet was the man mainly keeping Newcastle in the game at this point forcing his way to the basket or hitting from mid-range but his efforts didn’t stem the slowly building Phoenix tide and the home side took a 64 – 52 lead into the final ten minutes.

A Will Neighbour triple and a deuce from Danny Evans to start the final period and suddenly it was 69 – 52 and Newcastle looked in real trouble. Steutel called time-out to talk it over with his troops.

Whatever he said galvanised them for sure as coming back on to court they produced a 14 – 2 burst that cut the gap to five points before Anderson scored. The Eagles though suddenly looked like they were not to be denied and Hamlet was threatening to take over.

Cheshire go the lead to six then Ben Mockford hit a triple and Duke Shelton who got better and better as the game went on, hauled Newcastle back and Cheshire were wobbling at a mere point ahead.

Eagles had to foul and Neighbour made two free-throws to put them three in front and when Mockford’s 3-point shot didn’t find the basket, Newcastle’s heroic comeback fell just short and they had to accept a second defeat of the weekend.