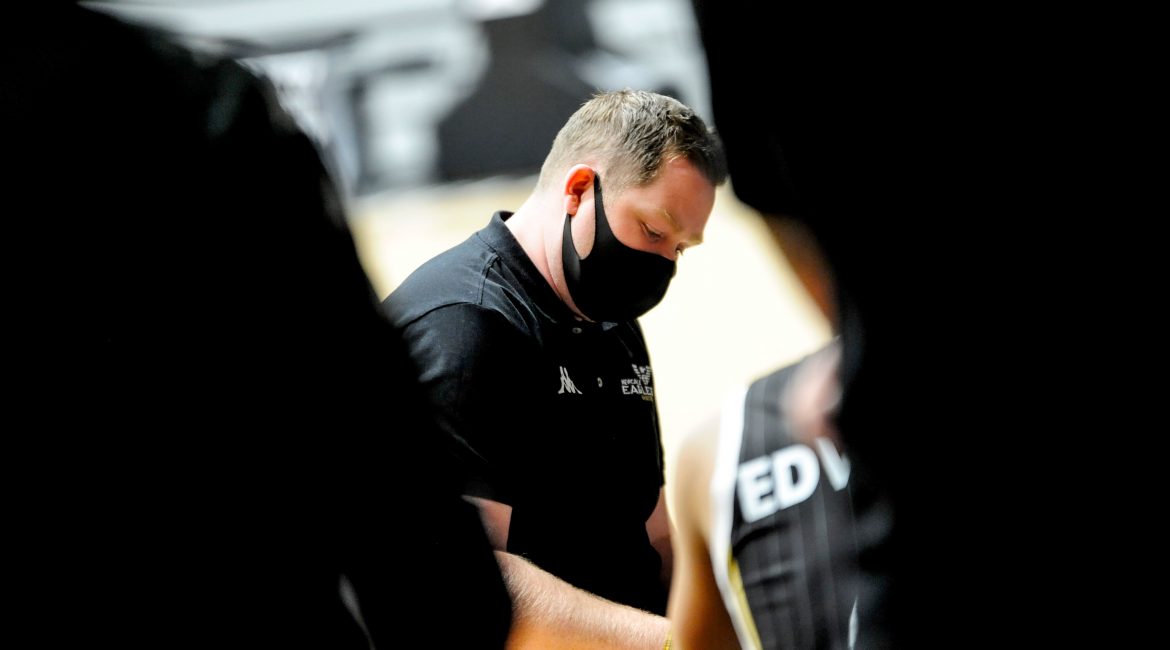 Newcastle Eagles need a win today down in Sheffield to confirm their quarter-final place in the BBL Cup. A win takes them to a 4 – 2 record which would be good enough to see them safely through

Head coach Ian MacLeod’s men are virtually through depending on results elsewhere in the tough group in any case. But they would have an anxious wait to see if this were confirmed should they lose to the Sharks this afternoon.

With Leicester Riders having one game to play against Sheffield and this afternoon’s game also counting there is a possibility that all four teams in the group could end on a 3 – 3 record. A record that London Lions already hold. It makes today’s game all the more crucial.

MacLeod is well aware of the fact as he contemplated the trip and the game following a solid week’s training for his side who lost heavily last time out at home to London Lions.

“Practice has gone well this week even though we haven’t had Rex (Pflueger) around. We took a lot from the London game and I think we have taken a step forward.”

Pflueger is in France with the Great Britain squad as they look to qualify for the EuroBasket2022. His call-up a reward for his good start to the season. It means he’ll not be part of the Eagles roster today as MacLeod confirmed.

“First and foremost, I am delighted for Rex. This is something we anticipated so it is not a surprise for us. Obviously, it would be better if we had him available but it is an incredible opportunity for him and we are all behind him.”

The last time Newcastle faced Sheffield at the ECA the Eagles came away with a 97 – 87 win which in truth was reasonably comfortable and could have been more as MacLeod noted.

“I think the scoreboard doesn’t lie. We built a strong lead and then became a little complacent. It would have been nice to win by a bigger margin, and we probably should have, but the goal remains to try to win on Sunday no matter the score.”

“Things may be a little different this week, Sheffield have some personal changes and we will be without Rex. I’m sure both teams will make some slight adjustments.”

That Sheffield change is somewhat of a surprise as they have released Point Guard Mackey McKnight a player that has been a real thorn in the side for Newcastle in recent times. His replacement, USA Shooting Guard Jeremy Hemsley, is a largely unknown quantity

A win could mean topping the group and take Newcastle to a 4 – 2 record to confirm progression in such a tough group.

“Progressing is the main goal and also to continue to build and prepare for the regular season.”

That regular season is just around the corner with the Eagles opening BBL Championship game against London Lions live this coming Thursday night at The ECA in front of the Sky Sports cameras.

Following the BBL Cup Group stages some of the other BBL clubs have re-jigged their rosters. Most notably fierce rivals Leicester who have brought in former Glasgow Rock, Ali Frasier. Does MacLeod anticipate any changes at Newcastle?

“Irrelevant what Leicester do, they had two ‘bigs’ before and they have two ‘bigs’ now. I’m always looking to see if we can add to the squad if the opportunity arises.”

This afternoon’s game tips at 3:00pm with Thursday’s game set for 7:30pm and fans can find out how to watch the game on the Newcastle Eagles website.