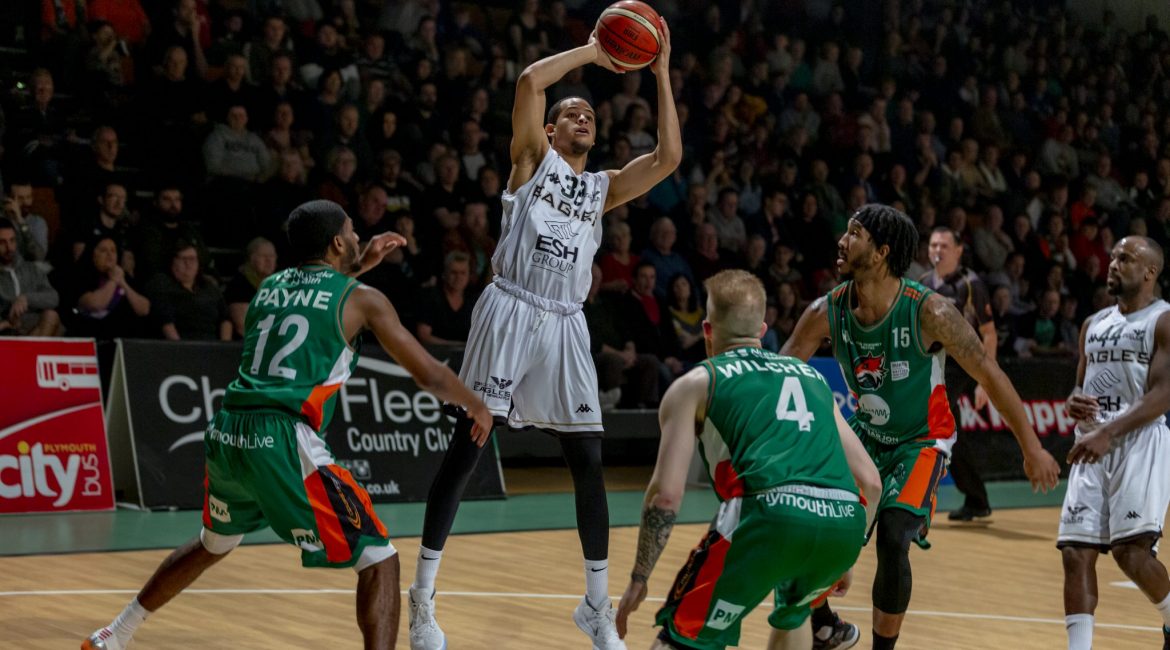 Down by 18 points in the first half, BBL Player of the Month Victor Moses having limped out of the action late in the first quarter and his front-court partner Darius Defoe far from fully fit having missed training all week, Esh Group Eagles Newcastle needed some inspiration.

It came with the introduction of Player-Coach Fab Flournoy who inspired his guards to produce scintillating performances in the second half as Newcastle came storming back to feel the Giants of Manchester.

The Eagles cut the gap to nine by the half and then flew off their perches as the second half opened to score 18 unanswered points and completely turned the game around. They were led by point guard Rahmon Fletcher who scored 26 points, Jeremy Smith had 23 and rookie Kyle Williams netted 20.

Williams also added in 9 rebounds and 5 assists as his raw talent and potential helped his side maintain their excellent recent run as they took a 102 – 85 win to make it five-in-a-row and keep them in second place in the BBL table before this afternoon’s huge clash at League leaders London Lions.

Williams was a happy young man at the final buzzer and explained what turned the tide against Manchester as he looked forward to this afternoon’s match-up with the predatory Lions.

“We started slowly and looked at the score at half-time and knew we just had to pick it up all round and that we could play better than we had in the first half and that’s what we did. We played better team basketball in the second half particularly on defence and it made the difference.”

“It’s strange sometimes we start off slow and have to make adjustments. It’s hard to say why we played bad in that first quarter but once we made those adjustments, we managed to get it going and got the win which was important.”

With Moses out and Defoe struggling, it was as much on the boards where Williams made a difference although shooting wise, he along with fellow guards Fletcher and Smith really got in to a groove and in superb third quarter the Eagles shot the ball at a staggering 82%.

“It’s not about individual performances. I’m pleased more with the win and that I could contribute to help. When you’re a man or two down it’s up to all of us to step up and play out parts. That’s why we have the roster we have to help each other and I’m just happy we got the win.”

With Lions losing at Bristol whilst the Eagles saw off Manchester it makes this afternoon’s game all the more important. It’s still London’s league to lose but an Eagles win this afternoon would cut the gap to just two games and make an unlikely tilt at the Championship possible.

“We’re just hoping to keep this momentum up and ride it all the way to the end of the season whoever’s in our path we’ll deal with them. I’m really enjoying it right now and having a great rookie experience and getting a win on Sunday would be a great feeling.”

This afternoon’s game tips at 4:00pm and can be watched live on BBC Sport via the red button, on connected TVs, BBC iPlayer and the BBC Sport app or website.