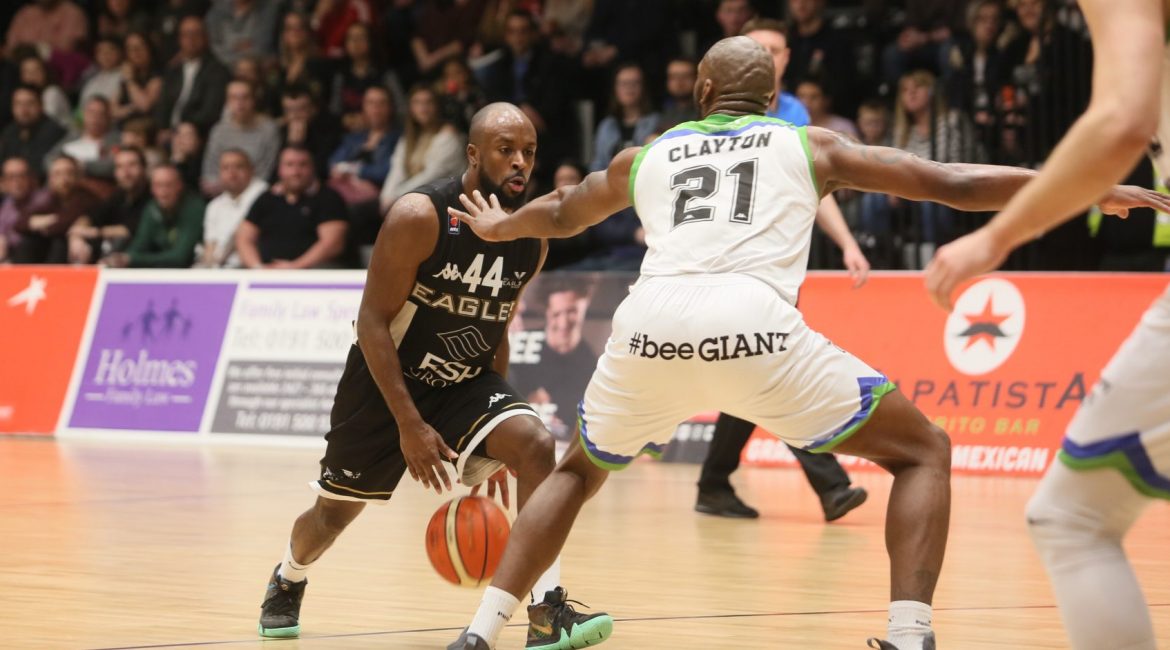 To the Victor go the spoils. But this was a bittersweet triumph for the reigning Molten BBL Player of the Month on the night Newcastle Eagles edged closer to a top two finish.

Victor Moses enjoyed his most prolific run yet in a black and white vest during March, averaging 22.7 points and nine rebounds per game.

But it looks increasingly unlikely that Moses will dress against league leaders London Lions in the capital on Sunday after he managed no more than a nine-minute cameo against the Manchester Giants.

But what a cameo. And a vital one at that.

Without Moses, Newcastle’s dire start would have been far, far worse.

The US forward hit all four of his first period two-pointers but elsewhere chance after chance went begging.

The misfiring hosts managed a paltry 24 per cent from the field during a shocking opening 10 minutes and missed all 12 of their efforts from beyond the arc.

Moses must have wondered where the support was coming from and an ill-judged three-point attempt summed up his growing frustration. Or desperation. Or both.

When the former Cheshire favourite landed awkwardly with 45 seconds on the first quarter clock things looked bleak for the men in black. Down by 18 points and suddenly shorn of their talisman and leading scorer, Newcastle had it all to do. Who knew they would go on to do it?

Manchester, of course, know how to win at the Eagles Community Arena having spoilt the opening night party in January. And even in the absence of free-scoring guard Ingus Bankevics, the Giants looked on course to take the league series.

The Eagles had been out-thought, out-fought and, not for the first time this season, out rebounded. Moses might have been Newcastle’s only scoring threat but his physical presence in the paint would surely be missed as Fabulous Flournoy’s men sought to regain the initiative in the battle for the boards.

The worst fears of the home fans were realised when Moses failed to return for the second quarter – his lower right leg heavily iced and the pain etched across his face. But in adversity the Eagles finally found some form and it was firebrand rookie Kyle Williams who sparked the much-needed revival on his way to 20 mightily impressive points.

Make no mistake – this was no vintage period from the hosts but almost anything would have been an improvement on a frankly forgettable first quarter. And nine points from Newcastle’s all-action guard saw Manchester’s lead trimmed to single figures at the half.

Even so it simply wasn’t good enough and Flournoy stormed off to the locker room readying himself for a heated exchange of views.

Whatever the veteran New Yorker said it had the desired effect. Utterly transformed, the Eagles exploded into the third quarter on the back of an emboldened 18-0 run. Even Moses managed a smile as shooting guard Jeremy Smith unloaded again and again to change the face – and the pace – of a fascinating fixture.

Smith might have bagged 23 points but key to the turnaround was Flournoy. The 45-year-old has sensibly limited his minutes this season but with Moses absent there was a pressing need for some veteran nous and a calming influence on court.

Watching Flournoy match up with long-time Newcastle nemesis Yorick Williams was just one of the eye-catching sub-plots that demanded attention. With a combined 88 years under their belts, the duo’s ceaseless energy was an example to all.

That the hosts led by six heading into the fourth quarter was testimony to the Eagles’ remarkable powers of recovery. Moses was an increasingly animated spectator as his colleagues closed out a crucial victory in some style but the longer March’s leading man sits out the action, the less likely Newcastle are to pip London to an unlikely league title.

Sunday’s away game is free to watch live on BBC Sport with tip-off at 4pm.