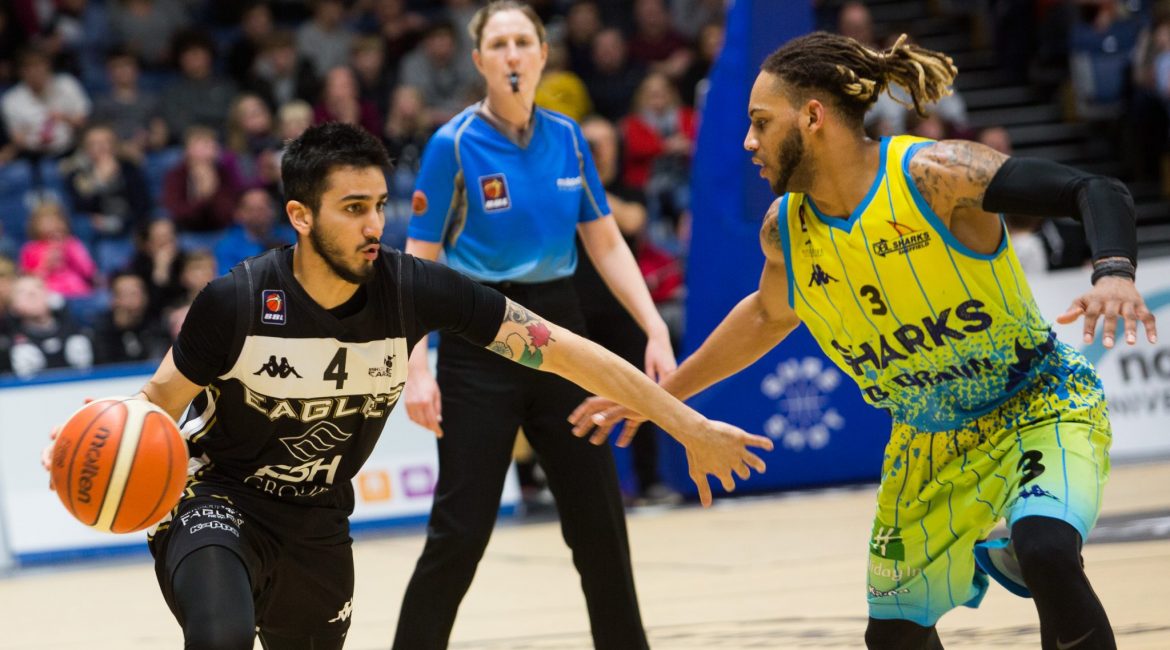 AJ Basi concedes the time has come for our Eagles to shore up the club’s leaky defence and kick a sickening habit for blowing leads.

The in-form benchman has emerged as one of the few positives during a rocky period for the BBL’s most successful franchise.

But Basi shares the pain of his below-par colleagues in the wake of successive homecourt losses against Sheffield and London.

BBL Cup winners Cheshire Phoenix are next up at Sport Central on Friday and the Canadian guard admitted: “Our home form is a concern.

“There have been a few times this season where we’ve come out in the second half with a lot less energy.

“When we’ve gone up a few points at the half we should be putting games to bed. It’s disappointing that we’ve blown leads.

“Sometimes the ball just doesn’t drop but we have to stay focused.”

Historically Newcastle have had no problem establishing and maintaining big leads at Sport Central.

But both Sheffield and London were able to chip away at significant deficits before overhauling their hosts.

“It’s true that we’re struggling to find some consistency right now,” added Basi. “We lose at home and win away and we want to be winning week in, week out. There’s so much talent on this team – everywhere I look there are guys who can shoot the ball.

“The reason we’re blowing the leads is that every so often we get careless defensively. Maybe we get a bit too comfortable when we’re leading games and slipping into that comfort zone can be dangerous.

“We need to do better for our fans. I’ve visited almost all of the other gyms now across the BBL and our venue and our fans are the best. We owe it to them to stop blowing those leads.”

Basi enjoyed a breakout weekend in an Eagles vest with key minutes against the Lions and 11 points in Sunday’s comprehensive win at Manchester.

The energetic playmaker has found court time hard to come by with US duo Jaysean Paige and Saah Nimley emerging as two of this season’s most prolific rookies.

But Basi looks capable of shouldering a greater share of the burden as Newcastle seek to avoid a third successive homecourt loss.

“This is my first season overseas and I’ve joined one of the most storied teams in the BBL,” he added. “I didn’t expect to walk straight into the starting five – I knew what I was signing up for here.

“I knew what I was getting myself into but I was excited by the challenge and I still am. My initial aim was to improve as the season wore on and take my opportunities when they came along.

“I’m just trying to contribute to the team in any way I can.

“Being a bench player has its ups and downs – there are some good days and some bad days. I know the fans only see brief glimpses of me on game day but behind the scenes I’m working hard to get better. There’s a lot of talent around me and that’s making me a better player.

“There is some great leadership that I can learn from.”

Our game against Cheshire Phoenix is this Friday with a 7:30pm tip-off and tickets are available now.

Get the best value seats in the Sport Central Arena by signing-up to our newsletter below: