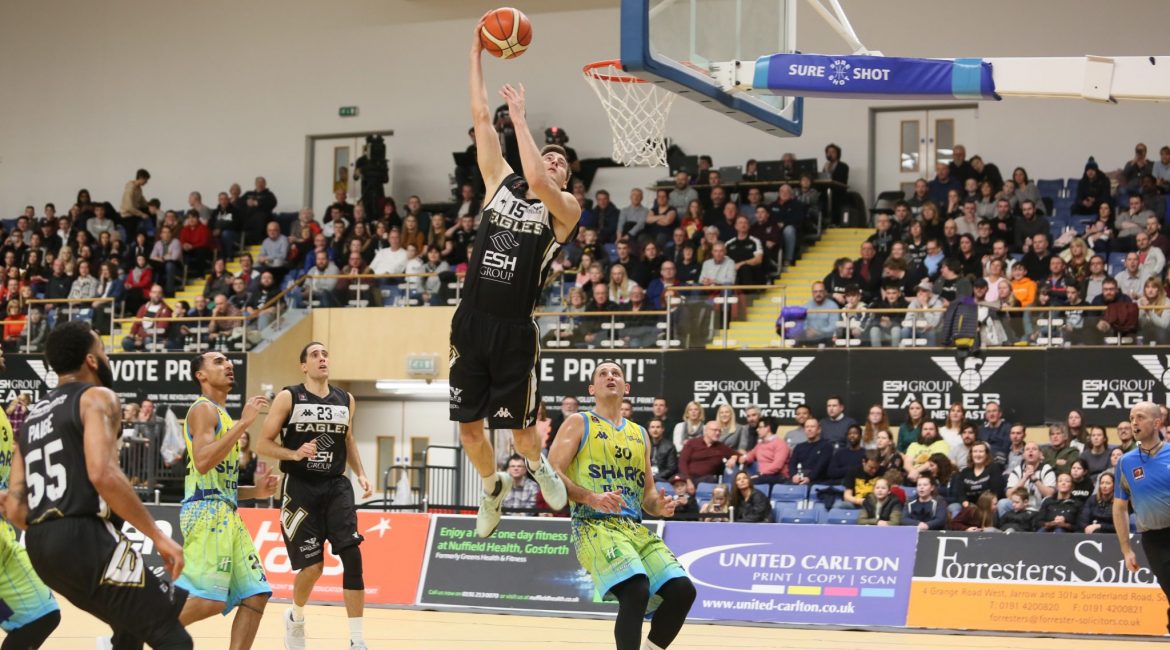 For seven long years Sheffield hearts sank every time a cruel BBL fixture list taunted the club with yet another tiresome trip to Tyneside. Prior to tonight’s clash the Sharks had failed to win in Newcastle since 2011 – a dire run stretching back 16 painful matches.

As if the history books weren’t damning enough for the South Yorkshiremen, an even gloomier statistic screamed familiar heartache as the two sides prepared to tip off in front of the BBC cameras.

It had been 14 seasons since the Eagles failed to make either the semi-finals of either the BBL Cup or the BBL Trophy and after the club’s shock exit from the former it was simply inconceivable that the six-times winners could bow out of the latter at the quarter-final stage.

But Sheffield had run Newcastle dangerously close in each of the team’s previous clashes this season – losing by just four points at home at the end of last month. And after the miles of misery and the years of hurt this remarkable 81-76 victory represented revenge of the sweetest kind.

A Trophy semi-final against Worcester Wolves awaits the deserving winners. An excruciating inquest is all the Eagles can look forward to before they tackle an in-form Phoenix in Cheshire on Sunday.

A strong start by the visitors suggested the Sharks sensed an upset but initially failing to shackle Saah Nimley would prove costly. 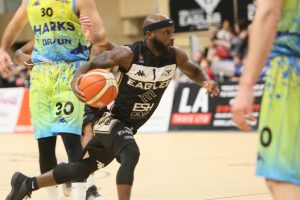 The sublimely talented playmaker was afforded the freedom of Sport Central on his way to 10 points, five assists, two boards and 100% shooting in 10 magical minutes. With 120 seconds of the opening period to play, Nimley’s delightful drop of the shoulder and dart to the basket left a bemused Zach Gachette chasing shadows.

Deserving of a break, Nimley sat out the first five minutes of the second period but if Sheffield had hoped for some respite from a relentless offensive march then they were sorely disappointed. Both Williams brothers had opened their account for the home side within the first two minutes of the restart and the best was yet to come.

With Nimley back in the mix, Jaysean Paige and the lively Jukic opted to produce a Friday night highlights reel of their own. Back-to-back alley-oops – the former feeding the latter on each glorious occasion – brought the Eagles’ bench to their feet. Leading 48-32 at the half and toying with their rivals, merciless Newcastle were in no mood to decelerate. Or so it seemed.

Sheffield might have missed a number of key defensive assignments during 20 disappointing minutes but even during the darkest days of their long losing run on Tyneside the Sharks have never thrown in the towel. There is a reason why, even after seven winless years in the North East, Atiba Lyons’ men were still seen as a serious threat to the Eagles’ unrelenting quest for silverware. In the blink of an eye that ever-present danger loomed large again.

A dazzling 20-0 third quarter run completed a truly stunning recovery as Sheffield took a 54-50 lead and a giant step closer to the Trophy’s final four. Neither Nimley nor Paige could replicate their first half form and the reborn Sharks – led by the outstanding Gachette – were suddenly seven points ahead with 10 minutes to play.

Sheffield’s homegrown hero continued to torment the hosts down the stretch and Nimley’s failure to reprise his first quarter heroics was a sight for Saah eyes for the jubilant Sheffield fans packed into one noisy quarter of an otherwise silenced Sport Central.