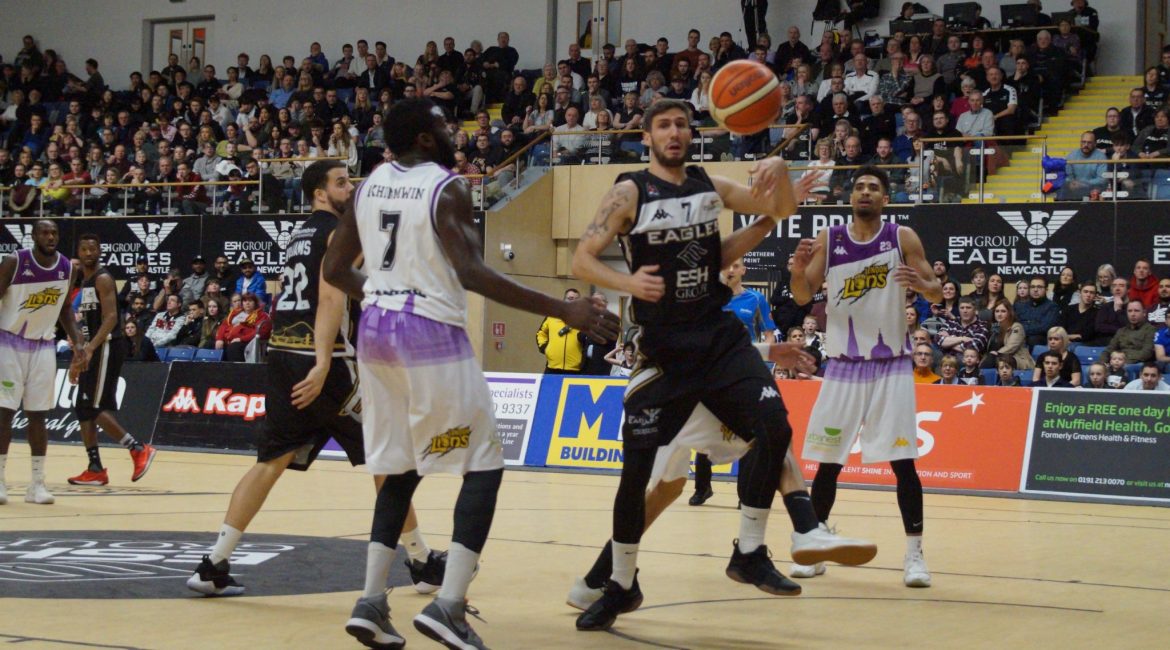 February 2, 2018. Groundhog Day. And from tip to buzzer another nervy Newcastle performance had the look of history repeating itself.

Just two weeks after one of the most painful losses in recent memory this was another case of homecourt heartbreak: it was déjà vu all over again as the Eagles worked so hard to establish a deserved first half advantage only to hand back the initiative – and the lead – to a lively London Lions.

Just as the hosts had been the architects of their own downfall on the way to a BBL Trophy exit at the hands of Sheffield last month, an error-strewn second half underpinned a second successive home defeat.

And even victory in Manchester on Sunday night won’t detract from the notion that, by Newcastle’s lofty standards, this is a season teetering towards crisis.

London, who included two former Eagles in a fluid starting five, looked up for the fight right from the tip as they sought to avenge October’s tough loss on Tyneside.

Andre Lockhart and Joe Ikhinmwin were both handed their BBL debuts by Fabulous Flournoy but neither quite matched up to the Newcastle playcaller’s exacting standards.

And after two separate 12-month spells with the Eagles both moved on – ultimately joining forces in the capital to become increasingly pivotal players for the Lions.

The robust pair combined for 12 first period points as the visitors matched their hosts basket for basket.

And Barbadian Lockhart’s buzzer-beating trey fired London into a 23-21 lead heading into the second quarter.

All 10 Eagles had tasted court time midway through the second period with seven players on the scoreboard. Flournoy, Drew Lasker and AJ Basi all announced themselves with arcing threes and if the Lions hardly appeared fazed then the spread of scorers will have worried London’s veteran playcaller Vince Macaulay.

Of equal concern to home fans was the lacklustre performance of a strangely subdued Darius Defoe. Just 32 shy of 5,000 BBL Championship points, it simply wasn’t happening for the normally dependable Londoner against his hometown club.

And it required a much-needed trip to the bonus stripe for Defoe to open his account with a brace of free throws. It was all Newcastle’s lucky number 13 needed to spark into life and minutes later a flamboyant reverse dunk brought the Sport Central faithful to their feet as the hosts took a 48-43 lead into the half.

Nevertheless, four points and two boards in almost 14 minutes was a poor return for one of this season’s most consistent performers and one of the players tipped to lead England’s Commonwealth Games’ medal bid in Australia this spring headed to the locker room in pensive mood.

Defoe emerged with renewed determination and the Newcastle captain bagged the first basket of the second half before going to work in the paint: it was impossible to fault a typically focused display but points were still at a premium for a player clearly frustrated at the sight of bucket after bucket bouncing back off the rim.

Significantly, the veteran forward wasn’t alone as the hosts shot a meagre 19 from 45 from two-point range all night. And if this was hardly a blow-by-blow repeat of last month’s Sharks horror show then the Eagles laboured to a 64-62 lead heading into the final quarter.

London had regained the initiative by the time Defoe raced off the bench to rejoin the fray but yet another mid-range jumper rimmed out. Back for more, Newcastle’s skipper finally nailed a two to level the scores at 75-75 with two-and-a-half minutes on the clock. Still, London stood firm.

And although Saah Nimley had the chance to take a remarkable clash into overtime, the desperate guard saw his last-gasp triple fall agonisingly short. Groundhog Day? Déjà vu? More like too many lessons unlearnt.