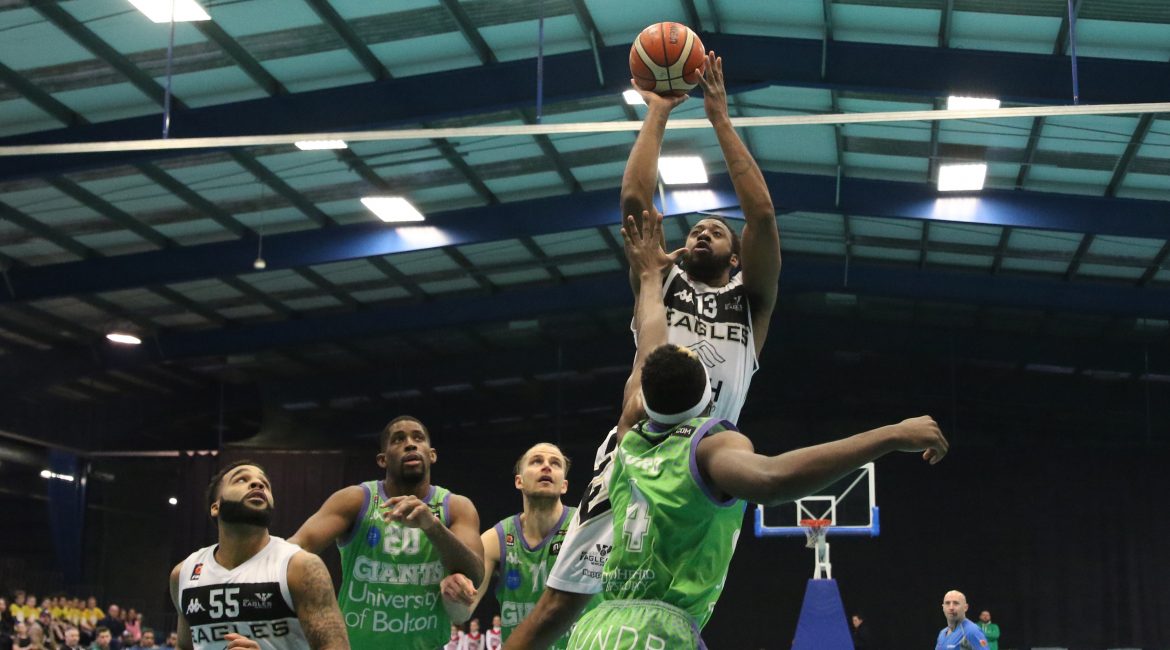 Newcastle Eagles looked every inch the title contender as the BBL’s second-placed side brushed aside the bitter disappointment of Friday’s homecourt loss against London to cut the Giants down to size in Manchester.

On the back of a fourth league loss of the campaign – a defeat that handed Leicester Riders the initiative in the race for the Championship title – Fabulous Flournoy’s roster required a convincing victory on the road.

And the men in black duly delivered to sentence the second-bottom Giants to a second defeat of the weekend and stay two points clear of Tony Garbelotto’s Glasgow Rocks.

Kai Williams led all scorers with a game-high 21 points and Darius Defoe bounced back from a hugely frustrating night against the Lions with a trademark double double [correct] of 18 points and 12 boards.

But it was the performance of fast-improving AJ Basi that will have caught the attention of Newcastle fans convinced the hotshot Canadian can play an increasingly key role for the Eagles down the stretch.

The guard showed nerves of steel to sink a silky three-pointer with his first shot of the night against London and later insisted he could do more, given an extended run on court.

Last night saw Basi handed almost 14 minutes to prove his worth and the BBL rookie responded with 11 points and three assists – Manchester fouling the playmaker four times in a bid to curtail an eye-catching cameo role.

With first-choice backcourt pairing Saah Nimley and Jaysean Paige playing a fraction of their regular BBL minutes, benchman Basi made a strong case for more time against BBL Cup winners Cheshire on Friday.

But it remains to be seen whether Flournoy feels the in-form understudy is ready to shoulder further responsibility against the Phoenix.

And Jamal Williams was named ahead of brother Kai in a key change to Friday’s starting five – with the visitors determined to out-muscle Manchester from the start.

The Eagles achieved exactly that to open up a nine-point first quarter lead and close the door on the hosts before the half.

Newcastle led 48-31 heading into the third quarter and come the final buzzer all 10 visiting players had points on the board.

An experienced bench contributed 46 with Flournoy dishing up seven assists in just 17 minutes. And in stark contrast to Friday night’s lacklustre showing inside, the Eagles picked up 56 points in the paint.

Avoiding a third straight homecourt defeat on Friday is now the immediate focus for a talented roster under pressure to prove its collective worth.

A two-week break follows the visit of the Phoenix and nothing less than a victory against Cheshire will assuage the fears of fans unused to watching fortress Sport Central breached.