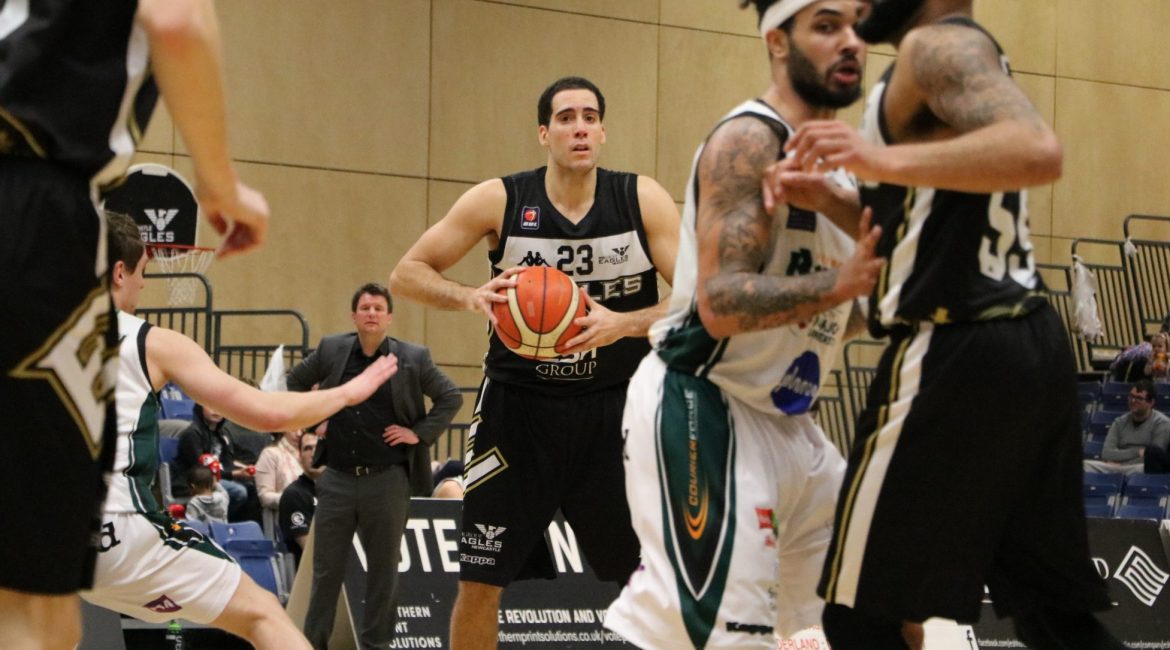 For Esh Group Eagles Newcastle the 104 – 79 BBL Championship win over Plymouth Raiders was another step forward on the run to the end of the season, writes Jeff King.

Whilst Plymouth are in the bottom three of the BBL table, to score over 100 points and conceded less than 80 thus giving a 25-point winning margin must be a satisfying night’s work in anyone’s eyes.

Plus, the Eagles did it without Captain Darius Defoe who spoke before the game about his team-mates stepping up if he did miss the game. He did, and they did with all nine players seeing significant court-time, all getting on the score-sheet and six of those in double-figures.

One of those six was forward Kai Williams who was not only restored to the starting five, he actually won the opening tip despite giving away six inches in height to Plymouth’s 7’ 0” centre Zak Wells. It meant that from the start Newcastle were on the front foot.

“It was good to get back to playing on a Friday night and get a good win in front of our own fans. Although it was a little ugly at times it was still a good result and we did good things at both ends of the court and now we need to keep things rolling.”

“We were clicking offensively early and we were getting some stops as well. We did hit a bit of a lull at times but we’re going to be able to draw on the good things at both ends of the court. Hopefully we can keep things going defensively and not have to rely on our offence going forward.”

Williams starting alongside his brother Jamal who was also in double figures certainly started the game on fire and was in double-digits by the end of the first quarter matching the ten minutes played with a point for each of them.

“I think I found myself open in the first little bit and took advantage. Then when they keyed-in on me it was next man up and a lot of things opened up after that for others and we ended up with a lot of guys in double-figures and for a balanced attack that’s all we can really ask for.”

“Guys were taking their opportunities and we were playing together as a team at both ends of the court and everything just fuelled and led in to one. We had been looking forward to playing Worcester last weekend, but it may have been a blessing in disguise that we didn’t.”

“It enabled us to have a few more practices before we played a game, work on some different things and I think that definitely helped. Early in the game we showed we were focused on both ends of the court.”

Having but the run of home defeats behind them and now having made it two wins in a row it’s Bristol Flyers next this coming Friday, once again at Sport Central and that will be a tough test for Newcastle against a well organised and drilled side.

“Coach Andreas (Kapolous) does a great job down there with his Bristol side every year and they’re always ready to play. Even though it’s a long trip for them, teams when they come up here always seem ready to play and we’re expecting their best effort and a tough game.”

“Hopefully we can have a great week of practice and have a good game. We’ll look at video too and there’s a few things from tonight we can correct again. Hopefully we can clean those things up and hit the ground running next Friday.”