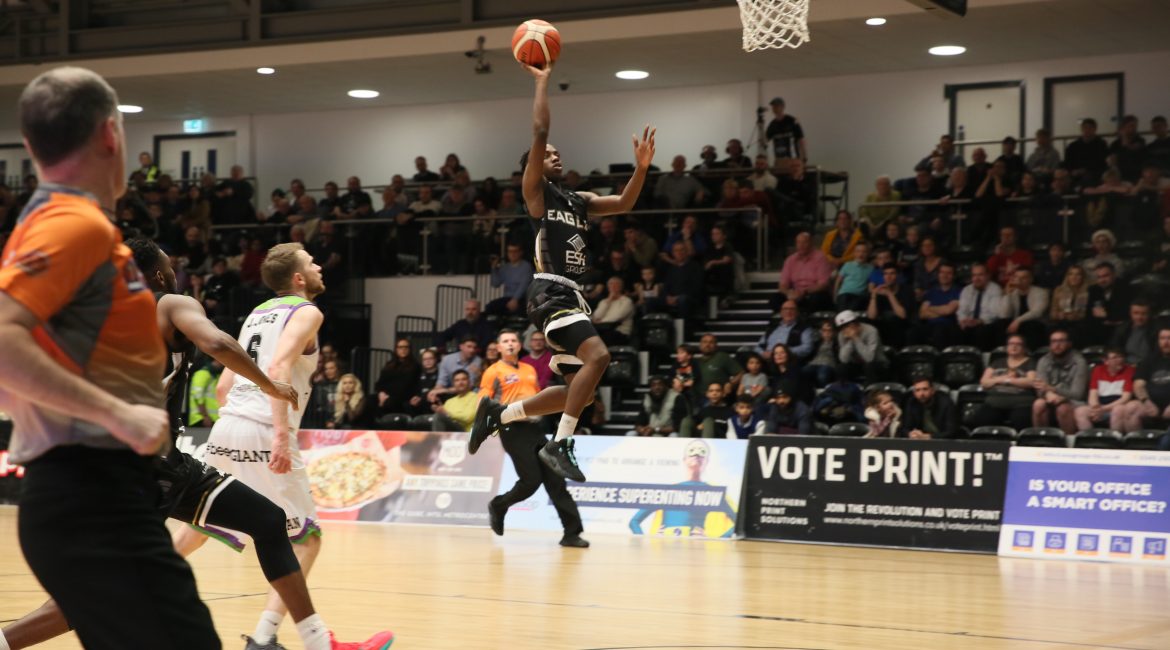 The Newcastle Eagles gave their loyal fans the Christmas present they wanted with a sparkling demolition of Manchester Giants at The Eagles Community Arena on Friday night. It was a champagne celebration of a performance as they powered home 131 – 63.

True, Manchester were under-strength and short-handed but they still had to be dealt with and Head Coach Ian MacLeod’s men certainly felled the hapless Giants. Seven players in double-figure scoring, four of which had double-double’s, capped a great night for The Eagles.

Due to the fixture organisation this BBL season this was actually Newcastle’s first and opening home league game. It was also the first time they’d been at The ECA in five weeks. It could hardly have gone better as The Eagles moved their Championship record to 2 – 0 with a dominant display.

23 points, 10 rebounds and 2 blocked shots on his home debut for 7’ 0” Centre C.J. Gettys made him an instant crowd favourite. 18 points and 10 rebounds for Sade Aded Hussein, 13 points and 12 rebounds from veteran Darius Defoe and 12 points and 12 assists for court general Rahmon Fletcher were all superb performances.

Add in 17 points a-piece from Eddie Matthew and Kai Williams and a dozen from American Mike Morsell and it shows what a festive feast of scoring it was. But for one young man it was a very special night as local lad Themba Yabantu got time to show his undoubted promise and potential.

8 points, 4 rebounds and 3 assists in 19 minutes of action were all career-highs for a player still learning his trade under MacLeod’s tutelage and his first made three-point shot of the night probably drew the biggest cheer of the night. Geordies do love a young local lad coming good.

Yabantu himself was delighted after the game as he reflected on a great night’s work.

“We’re very pleased with that performance. We’ve been working hard since Monday and coming in tonight we knew they only really had five players. But we just concentrated on doing what we had to do and it gave us a great win.”

“Personally, I got a lot of playing time and had to do what I know I can do. I just concentrated on what I can do. I did nothing crazy or go out of my way to do anything different I just did what I needed to do.”

“We all want to offensively and defensively rebound which we did as a team. For me I felt I passed the ball well to the right players and they made the shots to get me those assists.”

“I don’t think we played badly or scrappy and it didn’t matter what Giants were doing and didn’t get involved with how they were playing we just did what we try to do every game and control what we do and it worked tonight.”

Yabantu knows though that his side’s next game will be a totally different affair as Sheffield Sharks come to Newcastle next Friday night for the post-Christmas game.

“They beat us in both Cup games this season and all three league games last season so we definitely owe them one. We can’t take this game for granted and think because we beat a short-handed Manchester, we’ll be okay next game. We have to refocus immediately.”

It will be a tough game but if the Eagles show this type of ball movement, team basketball and high-quality shooting they have every chance to break the Sheffield hoodoo next Friday.