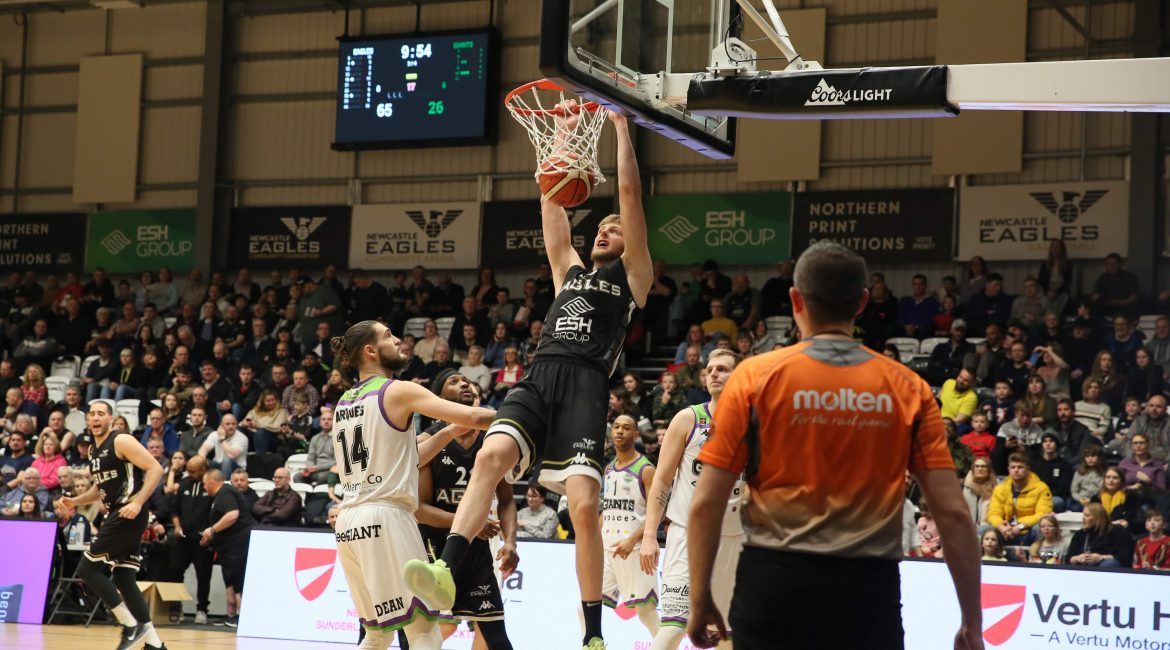 What you see is what you Gettys with Newcastle Eagles’ all-action new signing.

In fact, you get more.

And after waiting four weeks to make a home debut he described as ‘long overdue’, the new kid on the block made up for lost time against a pitiful Manchester Giants.

Newcastle were relentless in their pursuit of an early Christmas present against opposition lacking any semblance of spirit – festive or otherwise.

And on this evidence next Friday’s visit of Sheffield Sharks can’t come soon enough for an Eagles’ roster back home and back on point.

But the big numbers were everywhere on a night when the six-man Giants almost sank without trace – Rahmon Fletcher, Sade Aded Hussein and Darius Defoe all seizing the chance to drop double doubles.

The first homecourt points of Gettys’ Eagles career came courtesy of a bone-crunching dunk – the Ohio native converting from a monster of a Mike Morsell pass.

And seconds later the former Cheshire Phoenix favourite was muscling in on the Manchester offence to claim a convincing first rebound of the night.

The day before the Giants were due on Tyneside Gettys delivered a delicious dessert to his team-mates.

And with the mobile seven-footer causing chaos in the paint this was surely an opportunity for Newcastle to have their cake and eat it.

Gettys aside, Manchester had no answer to a flurry of threes as the hosts rained down points from beyond the arc.

Fletcher had opened the scoring with a trademark triple and there was more of the same from Mike Morsell, Drew Lasker and Eddie Matthew.

Gettys, meanwhile, was making every effort to pace every inch of the Eagles Community Arena as he sought to cement his reputation with the homecourt faithful.

A delightful reverse pass on the run landed in the safe hands of Fletcher.

And Gettys showed some silky skills on the floor before passing on the swivel…and out of bounds.

But by now nobody could fault the Newcastle rookie’s infectious enthusiasm.

The hosts led 33-16 heading into the second period and Ian MacLeod’s men continued to pile on the misery where hapless Manchester were concerned.

Young guns Matthew and Themba Yabantu were making the most of major minutes and the former had three triples before half-time.

Nick Schlitzer became the sixth player in black and white to convert from downtown as the Eagles set about establishing a 65-26 lead in the first 20 minutes.

And the Giants could have been forgiven for packing up and heading home rather than face another two quarters of unrelenting BBL basketball.

Gettys slammed down another rim-rattler to open up a 40-point advantage three minutes into the third period – further cultivating his cult hero status.

And with 20 seconds of the quarter remaining veteran forward Defoe joined the dunking party with the score that brought up Newcastle’s century.

The ECA Christmas celebrations were in full swing and the race was on to lead all scorers as a magnificent seven Eagles stars had double figure hauls heading into the final five minutes.

Fletcher and Defoe were able to sit out the closing stages with their double doubles [correct] in the bag and thoughts already turning towards Wednesday’s turkey and trimmings.

But Gettys was still going to work. Again. And again. Another thumping dunk – from a Matthew assist – took his tally to 19 before the MVP scored the final points of the night.

And the image of a beaming Gettys grabbing the ball on the final buzzer will live long in the memories of Newcastle fans quick to salute their new crowd favourite.

The back-to-back-to-back ECA action over the holidays continues next Friday night when the Sheffield Sharks visit, followed by the BBL Trophy First Round fixture on January 3. Tickets for both games are still available from the box office: