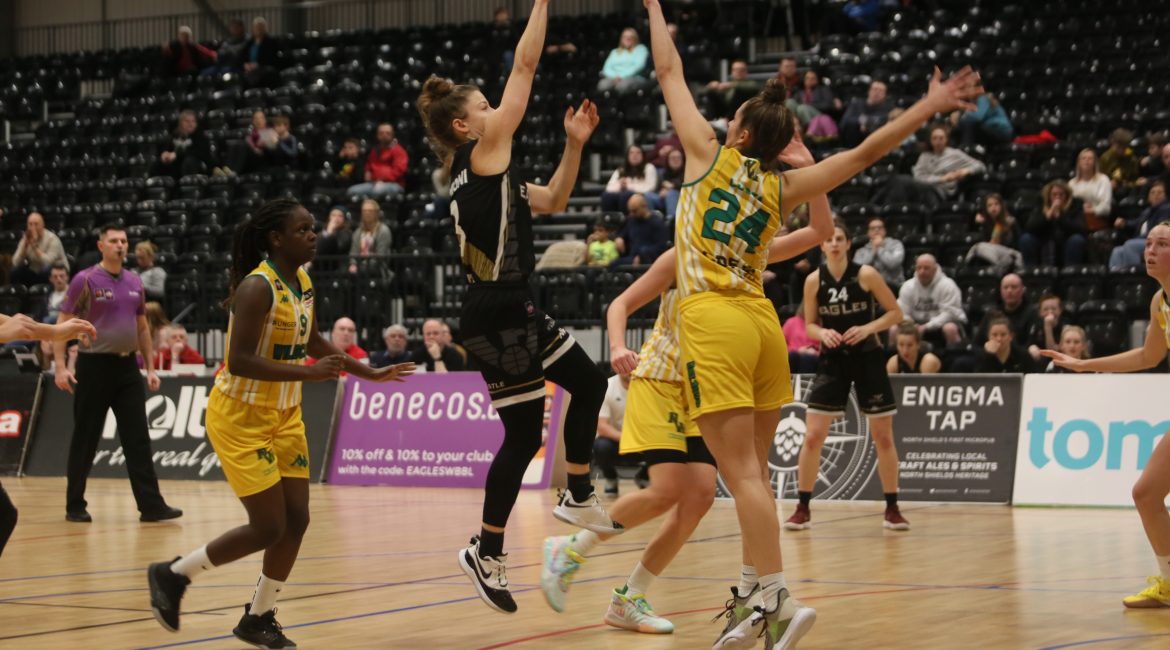 Nottingham Wildcats led 61-55 with four minutes on the clock after league MVP contender Jasmine Joyner burst into life after the break.

But Simioni launched the late fightback before Mante Kvederaviciute hit the final four points to keep Chris Bunten’s side at second in the table.

Georgia Ohrdorf led Newcastle scorers with 19 points and Simioni added 18 on a night when the Swiss playmaker passed 300 WBBL assists.

And next Sunday’s showdown with Leicester Riders can’t come soon enough for a side looking more and more like the real deal.

Prior to the biggest game of the WBBL weekend, in-form Fuchs Robetin outlined Newcastle’s pre-game plan.

Playcaller Bunten had demanded a fast start, free-throw accuracy and a return to the three-point shooting that underpinned previous big wins.

And after a dominant first period the Eagles had achieved all three to open up a fully deserved 20-10 lead.

Simioni started the game as she would finish it by converting two arcing triples.

And forward Ohrdorf – the league’s most fouled player – made the most of two trips to the bonus stripe with a perfect four from four free throws.

But the highlight of a thrilling opening quarter was the total team basketball that fired the hosts into a 10-point lead.

Swift passing and a smart assist from Simioni opened up space in the paint and Fuchs-Robetin finished the move of the match in style.

Bunten must have been delighted with the way his title-chasing players had restricted the free-scoring Wildcats on offence.

And when the league’s leading scorer and rebounder, Joyner, picked up a third foul four minutes after the restart it looked like advantage Newcastle.

But Nottingham had already kickstarted a much-needed comeback and even in the absence of their star performer the visitors hit back.

With three minutes and 42 seconds of the half remaining Tia Freeman hit two from two from the free throw line to level the score at 26-26.

And it was nip and tuck for the next two minutes before the Eagles, sparked by a Kvederaviciute three-pointer, went on a 9-4 run to lead 36-31.

Newcastle maintained their advantage for the first half of the third quarter but the reintroduction of Joyner boosted the Wildcats.

And the former NCAA Division One centre fired Nottingham into a 47-46 lead just moments after Ohrdorf, leading all scorers with 17 points, was benched on four fouls.

A huge three from Kvederaviciute tied the game at 48-48 and Bunten’s side hit the final points of the period to take the lead with 10 minutes on the clock.

A thrilling advert for the WBBL entered its final stages with all to play for as two fierce top four rivals ramped it up down the stretch.

Ohrdorf returned for the final seven minutes as Bunten went back to his starting five in a bid to close out the victory.

But it was advantage Wildcats with 120 seconds to play before the sublime Simioni took charge.

And Newcastle’s Lisa Koop was singled out by Kenrick Liburd’s furious assistants as the two teams shook hands on a fiery encounter.

The WBBL Eagles are back in action this Sunday in a top of the table clash against Leicester Riders and tickets are just £6: