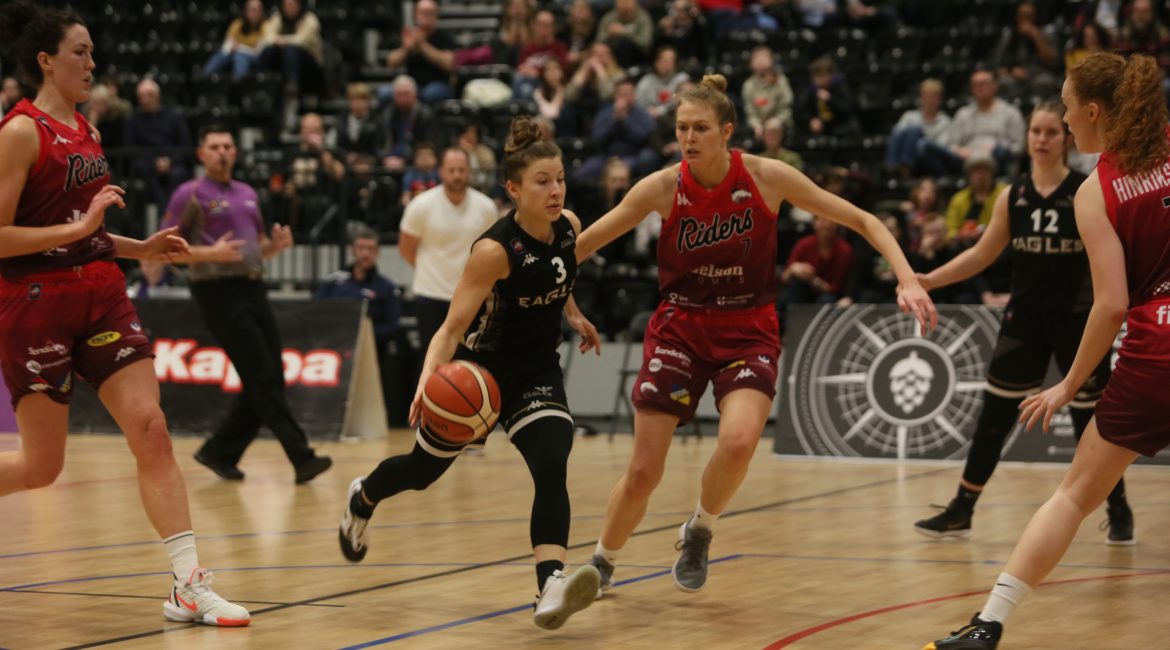 And Chris Bunten’s battling black and whites will rue a string of late missed chances as they slipped to a first league loss since October.

Double doubles from Mante Kvederaviciute, Georgia Ohrdorf and Anja Fuchs-Robetin were not enough to see off the robust Riders.

And even 11 assists from skipper Giulia Simioni couldn’t prevent defeat as ice-cool Iceland international Sara Hinriksdóttir dropped a game-high 27 points for the visitors.

For the second successive Sunday Newcastle were key players in the WBBL’s eye-catching match of the day.

But Leicester looked in no mood to relinquish second spot in the Championship table following a strong start to the top-three clash.

Jespar Sunderberg’s defeated 2019 Play-Off finalists opened up a 16-10 lead with five minutes on the clock.

And the East Midlanders led by as many as 11 in the opening quarter with Hinriksdóttir claiming 12 first period points.

Newcastle have been guilty of several slow starts this season and familiar hesitancy from the tip handed Riders an eight-point advantage heading into the second stanza.

But another of the Eagles’ traits is an ability to bounce back.

And the steely determination that had underpinned a club record run of league wins was in evidence again throughout a strong second period.

It wasn’t perfect from Bunten’s players with the hosts once again struggling from the free throw line.

But Newcastle were beginning to dominate in the paint and forced Leicester into a flurry of fouls and self-inflicted errors.

Five points on the bounce from Kvederaviciute narrowed the gap to four points but Riders scored the final basket of the half to lead 35-29 with 20 minutes remaining.

Bunten will have demanded more from his team from the free throw line in the second half.

And the dependable Ohrdorf sank two from two from the charity stripe within seconds of the restart as the WBBL’s most fouled player stayed cool under pressure.

Seconds later the all-action Aussie forward robbed Riders of possession on the halfway line before laying up for the two that reduced the deficit to six.

But Leicester kept coming as the Riders stayed in front – the prolific Hinriksdóttir moving to 22 points midway through the third quarter.

And although the explosive Ohrdorf ended the third quarter one rebound shy of yet another double double Newcastle still trailed by five with 10 minutes to play.

Two teams at the top of their game traded baskets throughout a tense fourth period.

Kvederaviciute moved to 18 personal with a floated two to reduce the deficit to one point with three minutes to play.

But 6ft 3in England international netball star Ella Clark hit two from two from the bonus stripe to restore the Riders’ five-point advantage.

And it was so near yet so far for the battling Eagles as skipper Simioni rimmed out with the last-second attempt that could have forced a classic encounter into overtime.