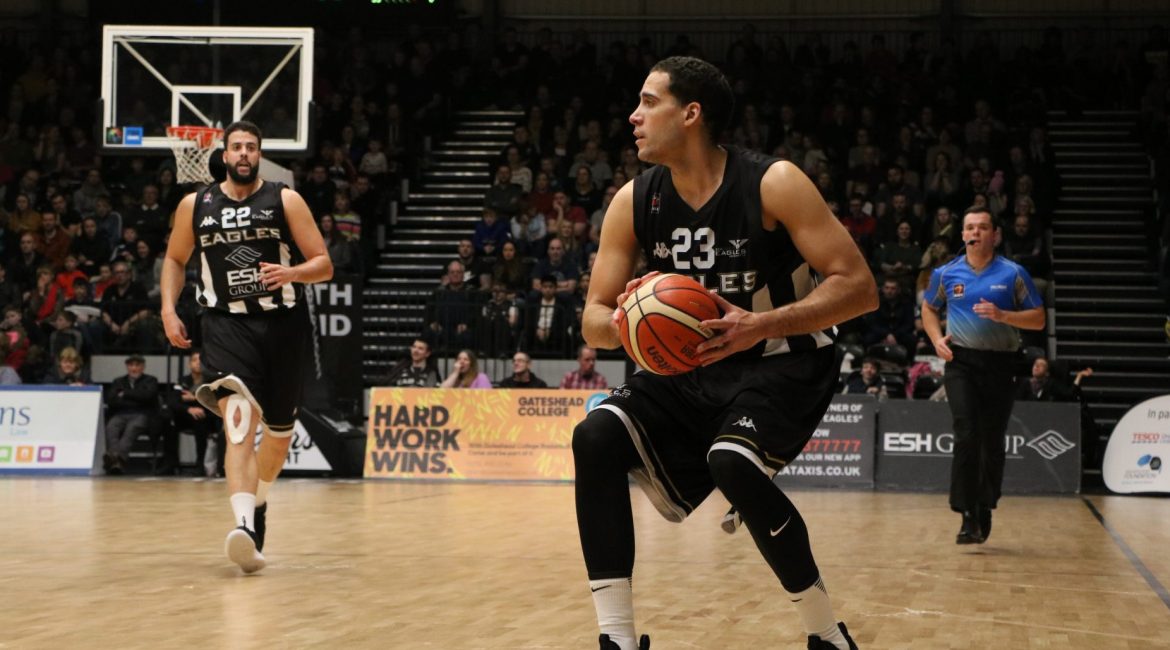 Esh Group Eagles Newcastle return to the court and the wonderful new Eagles Community Arena this Friday night with a 7:30pm tip-off in the BBL Championship against Bristol Flyers. Newcastle will be keen to get back to winning ways after an enforced International break.

Going in to that break they had been looking to extend their unbeaten run to four games. But, in a heartbreaker of a game they lost out on the road to Manchester 76 – 75 at the buzzer. It was a game where they were without two starting players in Rahmon Fletcher and Victor Moses through injury.

Canadian forward Kai Williams definitely felt their absence made a difference to the final result.

“Obviously it was a tough game for us and didn’t go the way we wanted it too. Even without Vic and Fletch we gave ourselves a great chance to win but just came up short. We’ve had a good film session on that game and definitely learned a lot from that.”

“Hopefully we’ll correct a few of the things that went wrong and we can move onwards and upwards. If we’d had those two other bodies that would have helped us and we definitely got tired but I don’t really want to use that as an excuse.”

“It’s all part of the game. Every time goes through back-to-back games and double-weekends. Basketball is a game of runs and unfortunately, they had their best one at the most crucial time. There seemed to be a bit of a lid on the basket for us. We got some good looks but just weren’t able to capitalise on those opportunities.”

After that game the Eagles Coaching Staff gave the players time off. Some went home and nearly all spent some quality time with their family and friends. For Williams it was a chance to prepare for another big event coming up.

“I did some stuff to get prepared for the baby coming in June so that was good and it was kind of nice to have some time to recoup and take care of the old body so yea, I’m feeling pretty good going in to this weekend.”

That weekend starts on Friday with the match-up against Bristol, a side Williams respects but hopes his side will be ready for especially as it appears Fletcher and Moses will return to the side.

“They’ve both practised and we did a light session with lots of shooting and Vic looked really good. He said he’s feeling fine and Fletch has returned after his sickness and tooth problem and he’s relaxed and looking good as well.”

“Bristol have been a little bit up and down this year but I think that’s a credit to the league as well as the league is a lot stronger top to bottom. They have a lot of explosive players and they’re always a good team that are well coached and like everyone in this league they always come ready to play Newcastle.”

Winning the last two games in the new arena in front of a partisan and passionate crowd has made a difference to the team and Williams admits it’s starting to feel like home.

“Once we got the first win out of the way there felt like there was a lot less tension in the air. The atmosphere has been absolutely amazing and that win in overtime against Glasgow was phenomenal. The crowd was amazing.”

“There were a few comments from the Glasgow players on court saying how loud it was and how much fun it looks to play in the arena and for Newcastle Eagles with that sort of atmosphere. The crowd support has always been good up in Newcastle but it seems to have gone up another notch.”

“With the fans being so close to the game and having a lower ceiling it just makes for a better atmosphere and we’ll definitely need that going forward as much as possible and that starts this Friday with the tough game against Bristol.”