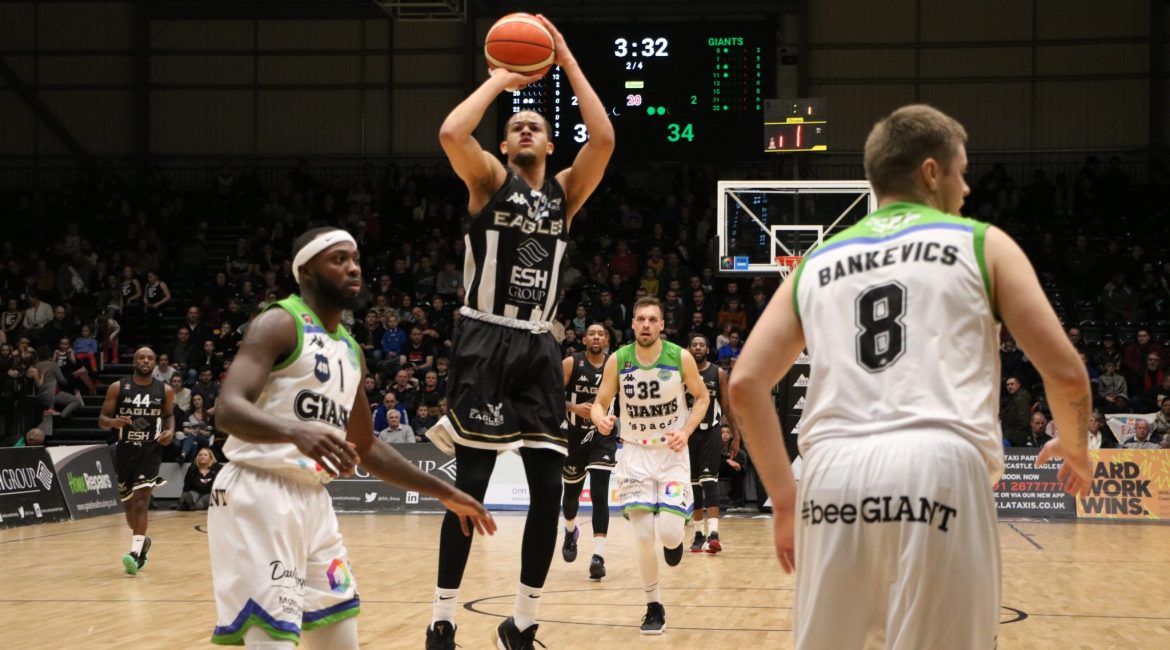 Newcastle Eagles managed to overcome an early first quarter 20-8 deficit to win their first game in their new stadium, defeating a combative Manchester Giants side 93-85.

Sitting in third place in the BBL table, Newcastle came into the contest on the back of a fantastic 103-92 win over Worcester Wolves.

In front of a packed Eagles Community Arena, the Eagles looked bereft of all ideas early on in Q1, with Manchester seizing the early initiative.

Two of Manchester’s star men led the charge for the Giants with point guard Mike McCall and 6’8 forward Willie Clayton’s talent on full display early on.

It looked as though it could be a long night ahead for Fab Flournoy’s men as Manchester raced out to a 20-8 lead mid-way through the opening period.

But thankfully for the Eagles, Darius Defoe was on hand to drag Fab Flournoy’s side back into the contest with the forward, who finished with 21 points, displaying his impressive athleticism on his way to the basket – the score sitting at 22-17 at the end of Q1.

With both sides trading early scores in Q2, one side needed to take the initiative.

Luckily for Newcastle, the player to take a hold of the game was Kyle Williams.

The forward masterfully netted an impressive three-pointer before sending the crowd into rapturous scenes with a moment of sheer genius.

Williams, running in full stride, managed to pull the ball behind his back to fool a defender, dribble to the basket and net which gave the Eagles their first lead of the game – the score sitting at 27-26 midway through Q2.

What proceeded Williams brilliance was a back and forth slug fest, with neither side wanting to let the other take full control of the game.

And when the buzzer went at the end of Q2, it looked as though the Eagles had managed to turn the contest around until a three-pointer from Callum Jones tied the contest at 44-44 a piece heading into the second half.

While Q3 started with a Manchester miscue, what followed was anything but sloppy.

Both sides began to get going, hurtling up and down the court as they traded early blows before Jeremy Smith showed off his hot hand by converting a clinical three-pointer which handed the Eagles a six-point lead midway through Q3.

Unfortunately, for Flournoy’s side Willie Clayton began to become an increasingly persistent thorn in the Eagles side with the hosts unable to deal with the forwards physicality.

The forward, who played the role of pantomime villain, managed to convert several free throws in testing conditions to keep Manchester in the contest.

However, Clayton’s biggest contribution of the night was not a scoring play, but rather a foul he committed on Eagles star point guard Rahmon Fletcher, who appeared unable to put pressure on his right leg after the collision – something which will concern Eagles Coach Fab Flournoy.

But while Manchester looked to have clawed their way back into the contest, a buzzer beating three-pointer from Kyle Williams handed the Eagles a nine-point lead heading into Q4, the score sitting at 71-62 in the host favour.

With the Rocky theme blaring out of the ECA speakers, it seemed as though Newcastle were ready to climb the steps secure their long-awaited first win in their new venue.

The Newcastle onslaught picked up where they left off at the end of Q3, displaying their championship quality on both sides of the ball to push their lead to 12 with just 4:49 left in the contest.

And while Manchester tried their hardest to stay in the contest, they were ultimately unable to match the Eagles down the stretch, with Fab Flournoy’s men ultimately securing a comfortable 93-85 win.