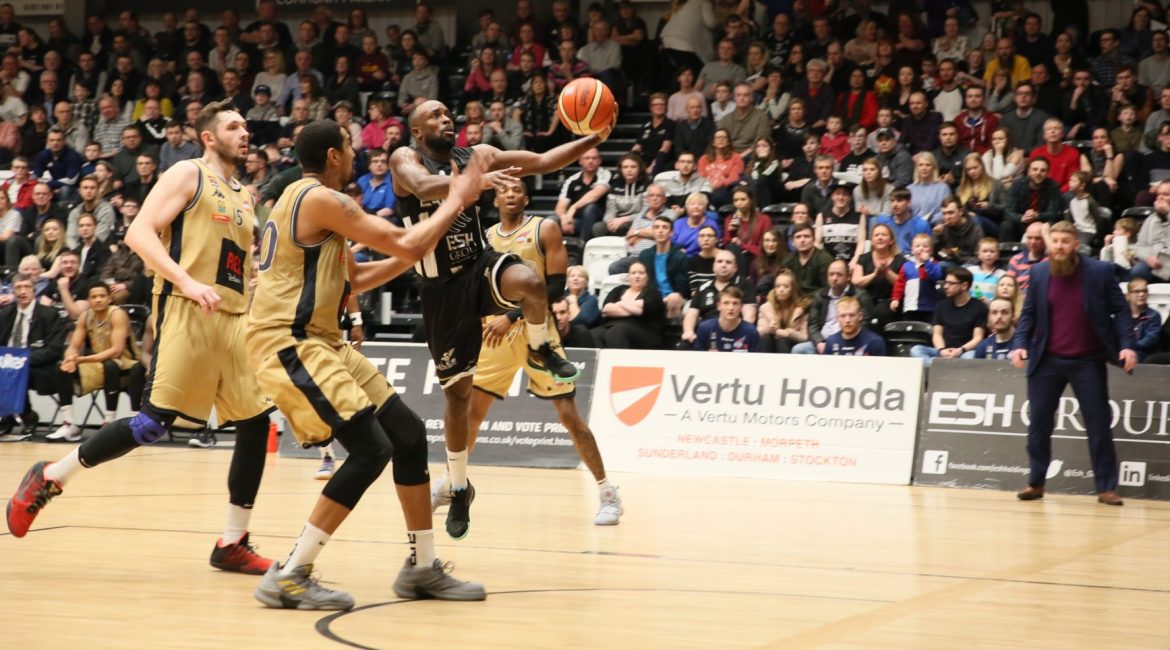 Back to back wins. Another sell-out crowd. Fabulous Flournoy back in black and white. And overtime drama to boot. Now it feels like home. Finally.

Newcastle’s thrilling win against a battling Glasgow Rocks suggested the Eagles Community Arena can become a fortress. It can lay the foundation for future success.

And it can help the hosts build on a legacy that still strikes fear into rivals across the UK.

On a night to remember Newcastle had raced out of the blocks only to fade just as fast. Darius Defoe sank his sixth point of the game to open up a 10-6 Eagles lead but within five minutes the hosts were trailing by three.

Cue Flournoy’s first taste of court time at the venue he had pictured so many times during his celebrated tenure as Newcastle playcaller.

Four games in to the club’s ECA residency and the New Yorker finally experienced competitive action in front of a capacity crowd.

But even Flournoy was unable to stop the rot as the Rocks went on a roll: that the visitors led by five after the opening quarter was all Darryl Wood’s men deserved.

And things swiftly went from bad to worse for Newcastle as a dreadful start to the second period allowed Glasgow to open up a 40-32 lead.

Defensively inept and guilty of poor decisions at the offensive end, the stuttering Eagles stood off their cross-border rivals and paid the price.

Not for the first time this season Newcastle were clearly missing the injured Victor Moses but the American’s absence was offset by Gareth Murray’s failure to suit up. The veteran Rocks’ forward headed south with a broken nose but 15 minutes into a traditionally feisty clash and the GB star was already sniffing out victory.

Perhaps Glasgow’s form should have been expected. The Scots had won four league games on the bounce heading into last night’s fixture and looked every inch the well-oiled machine chasing down a playoff berth.

The Eagles, by contrast, appeared as uncertain as they did unconvincing. A shake and bake special from Kyle Williams, followed by a coast-to-coast conversion courtesy of Rahmon Fletcher, helped to turn the tide but the hosts still had it all to do as they headed to the locker rooms trailing 52-45 at the half.

But it wasn’t all bad news for the Newcastle faithful. One lucky fan won a dream holiday to Florida during an extended break. If only the Eagles could make it a memorable win double.

A spark was required to ignite Newcastle and it came in the shape of a contentious call that brought the homecourt crowd to its feet. Fletcher was penalised for a charge as he teed up the onrushing Jeremy Smith and the former faced the final 15 minutes on four fouls – the veteran guard’s bullish response was to hurl an alley-oop pass in the direction of Defoe and the in-form forward levelled the scores at 59-59.

Suddenly Fletcher was on fire. But it was an exceptional save and a pinpoint three-pointer from the ever-dependable Drew Lasker that sent the Eagles into the final period leading by a point.

As a bruising match reached boiling point, an ugly melee on the third quarter buzzer saw players and coaching staff from both teams mass in front of the Newcastle bench. Flournoy and Rocks’ Kenny Carpenter were eventually called for technical fouls as the officials favoured minor sanctions over serious punishment. Or fudged it. Take your pick.

It all made for a memorable fourth period punctuated by Fletcher’s brilliance, Defoe’s resolve and a raucous crowd rocking the Eagles’ nest. Newcastle might have made a hash of their final possession – allowing Glasgow the final shot of regulation time – but this was a magnificent match that deserved another five minutes of manic action.

Overtime ensued. Smith went to work in the paint to open up a 93-90 lead with two-and-a-half minutes on the clock and a Defoe double from the bonus stripe extended the hosts’ lead. It was a lead the Eagles would not surrender.