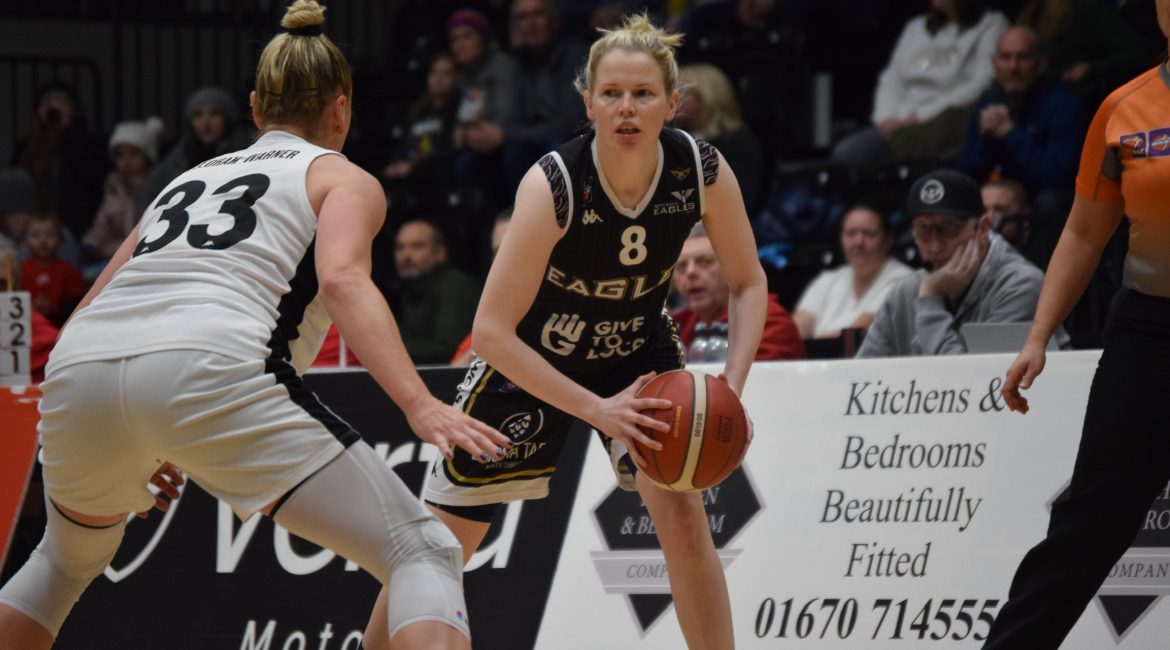 A revved up Rachael Bland is relishing a full season under the new regime of Newcastle Eagles playcaller Noelia Cacheiro.

And one of the most familiar faces on the North East’s hoops scene insists the women’s game is on the cusp of success — on and off the court.

Bland has committed to a ninth successive season in an Eagles’ vest after making 24 appearances for Newcastle last term.

And the 31-year-old said: “On and off the court we have a huge amount of potential as a team and as an organisation.

“There’s room to grow and I’m very invested in the long-term plan.

“I feel as if we’ve reached an important point in the history of the game in the North East and I’ve never been so keen to play my part.”

Bland joins Chloe Gaynor as the second player to buy into Cacheiro’s long-term rebuild this summer.

And the popular Wearsider added: “The team that finished last season might have been short-handed but the basketball we played was exciting to watch.

“We boast a lot of individual talent and just need a few more bodies to allow that talent to flourish.

“If we can retain that same core group of players then there’s real potential there.

“We have the basis of a team that can respond to Noelia’s ambition and values and play the basketball she encourages.”

Cacheiro joined Newcastle in the New Year and getting Bland fit was one of the first challenges facing the Spaniard.

But when the Eagles’ longest-serving player did return from injury she was rarely off court and always in the mix.

“It wasn’t easy for Noelia stepping into that role midway through the season and we’ll all benefit from a full pre-season,” added Bland.

“It’s good to have that build-up in terms of developing cohesion and chemistry and we want to hit the ground running come September.

“In fact, it will be crucial in terms of how we perform moving forward.

“I know what she looks for in a player and a person and that’s one of the reasons I’ve committed to the club for another year.”

Bland and Gaynor clocked up some serious minutes in the final weeks of an ultimately frustrating campaign for the women in black.

And both players will be hoping to fire Newcastle back into the top eight and back where they belong…as wildcard contenders capable of upsetting the league’s top four.

“Despite all the things that were going on off the court last season we were still able to focus on what was important,” insisted Bland.

“We were able to attract a record crowd to the Vertu Motors Arena and show that there’s a want and a need for top-flight women’s basketball in the North East.

“It was great to play in that environment and to prove that we’re impacting on the local community in such a positive way.

“Things are heading in the right direction.

“Given the unique set of circumstances we faced last season we still did pretty well as a team.

“There was a lot of forward momentum on court, especially towards the end of the season.

“With a new coach coming in midway through the campaign it was always going to be a challenge.

“But those of us who stayed the course were focused on the bigger picture and we’re fully invested in the community.

“If we can show the next generation that there’s an opportunity to play women’s basketball at the highest level in the North East then we’re doing our job.”

Newcastle tip off the new WBBL season on September 24 when the Eagles face Chantelle Handy’s Caledonia Gladiators in Glasgow.

Cacheiro’s side returns to homecourt action on October 1 when Nottingham Wildcats visit the Vertu Motors Arena.

Season tickets to support the Eagles WBBL team are still available with the Early Bird discount until the end of July from the box office.