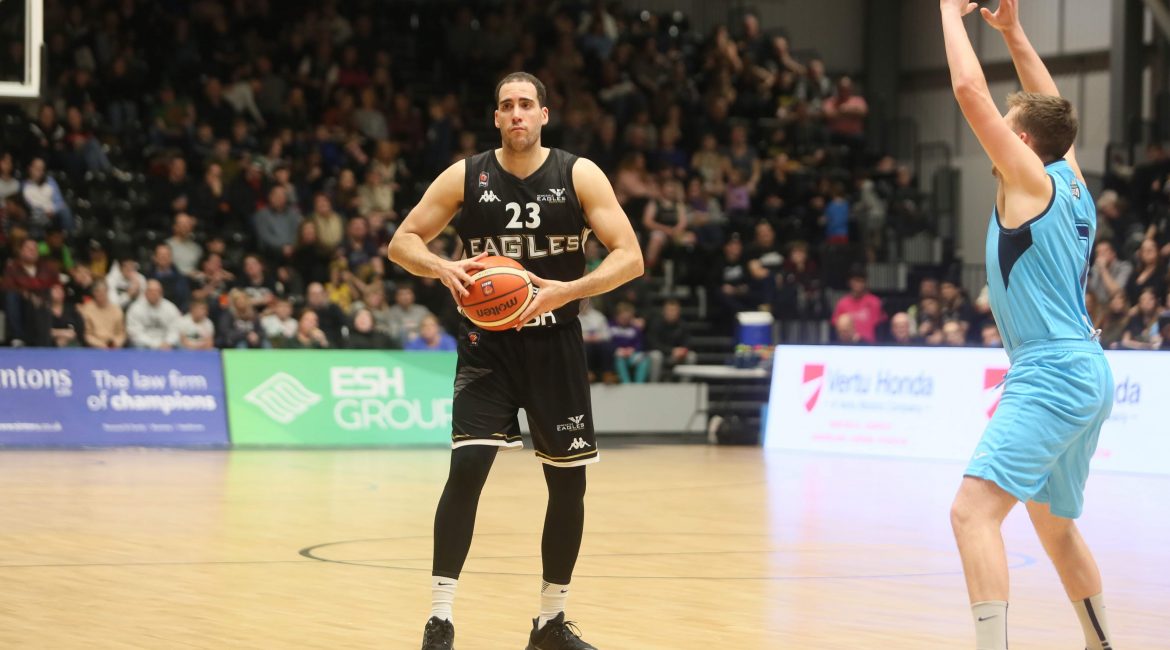 As expected, Newcastle Eagles cruised into the quarter-finals of the BBL Trophy on Friday night with a crushing 133 – 61 victory over Dunfermline Reign at the Eagles Community Arena.

Dunfermline who are the reigning Scottish Basketball Champions are an amateur side playing in Scotland’s top division made up entirely of locally based players. Going up against a top professional BBL side in the Eagles was always going to be a tough order and so it proved.

Even without the injured Sade Aded Hussein and the unwell Mike Morsell it was clear from the off that the home side had a massive height and strength advantage. C.J. Gettys with 31 points, 19 rebounds and 5 blocks was virtually unplayable for the Scots and led the way for The Eagles.

There was also a first-ever triple double as a professional for bench player Nick Schitzer who had 30 points, 10 rebounds and 10 assists in the game. Add in a 13 point/10 rebound effort from local youngster Themba Yabantu and it was easy to see how dominant Newcastle were.

One of the real benefits though for Coach Ian MacLeod was the ability to give some of his bench players a run-out and even 17-year old Academy starlet Sauve Kande chipped in with six points in twenty minutes played.

Eagles at Gladiators in BBL Trophy First Round Draw
November 2, 2022

In the absence of Morsell and Hussein it was Kai Williams in his third Eagles season that Coach MacLeod turned to for a starting position and Williams summed up the win on the final buzzer with his thoughts.

“We have some guys who are hurt a little bit right now and it’s at a weird point of the season so it was good to see everyone that went out there contributing. It was nice to see Sauver play some minutes today and do well.”

“He’s a young guy who works so hard in practice and has been a big help to us in making our numbers at practice. He deserved his minutes tonight along with Themba and it’ll help their experience seeing them out there contributing which was great.”

Eagles actually lost veteran Darius Defoe after a couple of minutes into the game with a hamstring injury but with the likes of Gettys, Schlitzer, Rahmon Fletcher, Drew Lasker and Williams himself always had enough in reserve to take care of business.

“It was nice to get a start again but to be honest it really doesn’t matter to me whether I start or come off the benchand play a bunch or play a little. As long as I have an opportunity to contribute in some way, shape or form I’m happy with that.”

“Especially if guys are hurt and there’s a way, we can rest guys a little bit and do that then it’s not a problem with me playing my role.”

Williams himself had eight points and five assists in twenty minutes played giving solid minutes to his team and Coach but as well as praising the younger element for their contribution he picked out the performances of Gettys and Schlitzer for special mention.

“Obviously we knew coming in that we were playing against a team that was under-sized and it was expected that C.J. would have his way with them a little bit and he did what he had to do. Nick is an extremely versatile player for us as he can do a little bit of everything and he showed that tonight.”

So, Eagles through to a home quarter-final tie against Sheffield Sharks on a date still to be arranged but next up is a far tougher appointment than they faced on Friday. Next Saturday night they will be at the red-hot home of the Surrey Scorchers.

Surrey have won four-in-a-row at home and lie third in The BBL. Williams knows that’s a totally different proposition for the Eagles to take on.

“Surrey are always a team that plays well at home. They’re playing really well at the moment. It’s going to be a long trip down there but it’ll be a good game. We have a full week to prepare for them in practice and I think we’ll be ready to go with Sade and Mike back.”