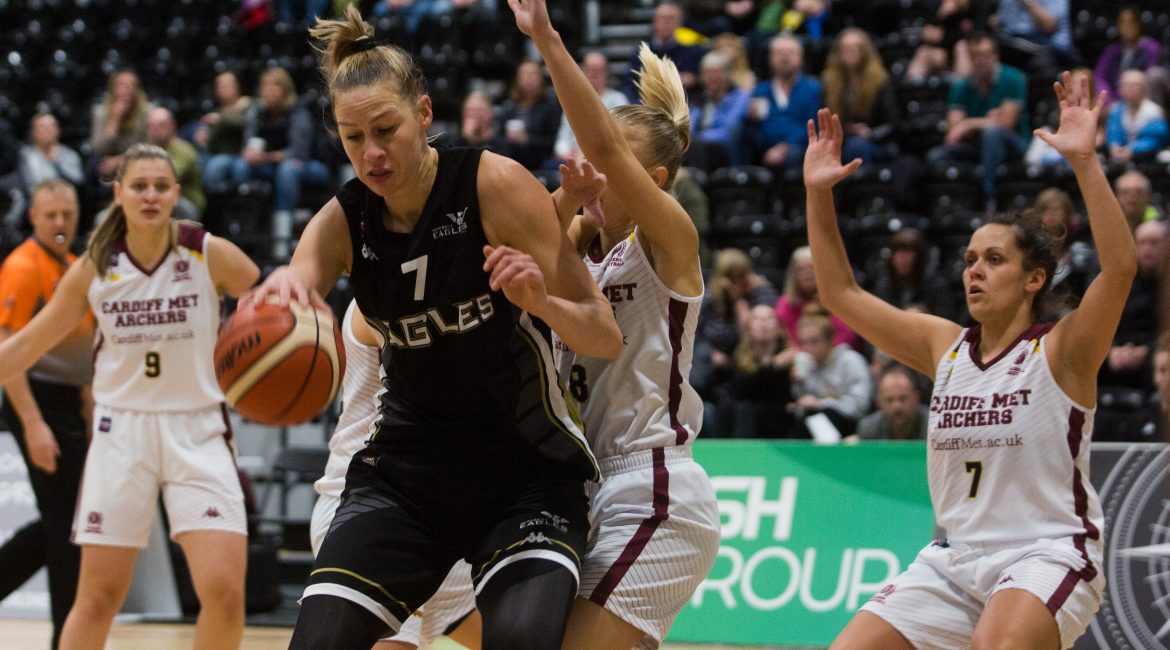 Confident Lisa Koop insists Newcastle Eagles can compete for silverware in the WBBL this season.

And the towering German believes Chris Bunten’s side is capable of springing a huge upset in Sunday’s top-flight clash with reigning champions Sevenoaks Suns.

The visitors arrive on Tyneside on the back of a titanic 29-game winning streak in the WBBL.

And Sevenoaks defeated Newcastle 81-57 when the two teams met in the Trophy group stages last month.

“The margin of defeat against Sevenoaks in the Trophy doesn’t tell the true story,” countered close-season signing Koop.

“Talent-wise there is not 24 points separating the two teams.

“We had played less than 24 hours earlier while the Suns had a rest day. We didn’t have Mante [Kvederaviciute] in the team and I picked up early fouls.

“None of that helped us in the second half and it allowed Sevenoaks to pull clear.

“But Mante is the kind of player who can make everyone around her a better player, as well as making a huge personal contribution.

“And if I can stay out of foul trouble then we have a great chance.”

Former Team Northumbria favourites Ta’Tani Clark and Cat Carr underpin a Suns side relentless in its pursuit of basketball perfection.

But Sevenoaks boast weapons across the floor with Renee Busch joining Clark in the latest WBBL All Star five.

“Of course, you can see just how strong the Suns are and we know that,” added 6ft 6in Koop, who has plied her trade across Europe.

“They’re physically powerful and their players are experienced in the WBBL.

“They’re used to playing together and it’s easy to see why they’ve been the dominant force in the league.

“But I really do feel that if we play to the best of our ability then we can compete with the very best teams in the WBBL.

“Can we beat Sevenoaks? I think we can.”

Koop and Kvederaviciute both impressed in the Eagles’ 51-point demolition of Cardiff Met Archers earlier this month.

And head coach Bunten added: “They are quality players and it’s my job to make sure they’re available every week.

“With Lisa and Mante on board we’ll be a tough team to beat and Sevenoaks know that.”

German international Koop is one of the most powerful players ever to wear a women’s basketball vest in the North East.

But it is the 34-year-old’s mental strength that could prove the difference during a long and arduous WBBL campaign.

“I’m studying Sport and Exercise with Psychology at Northumbria University,” she explained. “And I already have a Masters in psychology.

“The mental side of sport is something I’m very interested in. It’s not a popular subject in Germany just yet but I really believe psychology can have a huge impact on performance.”

This WBBL clash tips off at 4pm at the Eagles Community Arena: