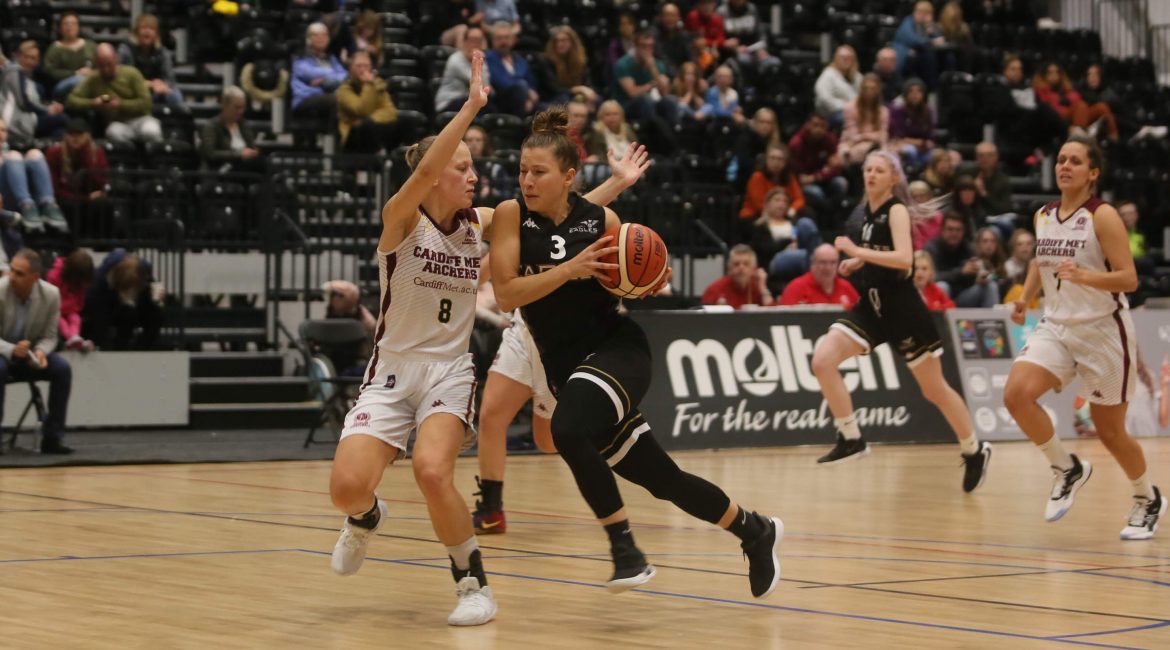 Newcastle Eagles cruised into the last eight of the WBBL Cup as they defeated an outclassed Cardiff Met Archers 95-44.

Chris Bunten’s roster will discover their quarter-final opponents today at 6pm live on the WBBL Facebook Page on the back of a ruthless display against the winless Welsh.

And on this evidence every one of the seven sides joining Newcastle in the draw will want to avoid a remodelled Eagles side boasting pace, height and power.

And the experienced Lithuanian sparked a 14-0 Newcastle tear to finish with eight first period points on a sparkling WBBL Cup debut.

The Eagles led 24-18 heading into the second quarter and memories of Cardiff’s bright opening were fading fast as Bunten’s side spectacularly turned the screw.

Millie Oates maintained an impressive start to life in a black and white vest with the assured three that sparked another brutal second period blast.

And even a third foul for German centre Lisa Koop – with five minutes of the half remaining – barely blunted an attack seeking to finish the fixture as a contest.

The increasingly influential Anja Fuchs-Robetin bagged a plus-one to take her quarter tally to eight and Kvederaviciute hit a clutch two-pointer on the buzzer to send Newcastle into the locker room 22 points ahead.

Bunten threw Koop back into the action at the outset of the second half – going big with his four tallest players complementing playmaker Giulia Simioni.

And hapless Cardiff couldn’t handle the Eagles’ extra height as the hosts bossed the paint at both ends of the court.

Kvederaviciute continued to deliver on her first period potential as the Lithuanian international poured in the points for fun.

And she was ably supported by an on-fire Fuchs-Robetin with two of Bunten’s big summer signings combining for 39 points in 30 minutes.

Newcastle led 78-40 heading into the fourth quarter before a dire performance went from bad to worse for the woeful Welsh.

Christina Bigica fouled out with more than five minutes on the clock and team-mate Marie Le Picault became the second Cardiff player to exit the game early with five personal fouls.

The next Eagles WBBL home game is Sunday 20 October against Sevenoaks Suns with a 4pm tip-off.

Season tickets are still available from just £65 to support our women’s team all the way through to the end of the 2019-20 campaign in the spring and they can be purchased along with single game tickets for just £6 each through our box office.