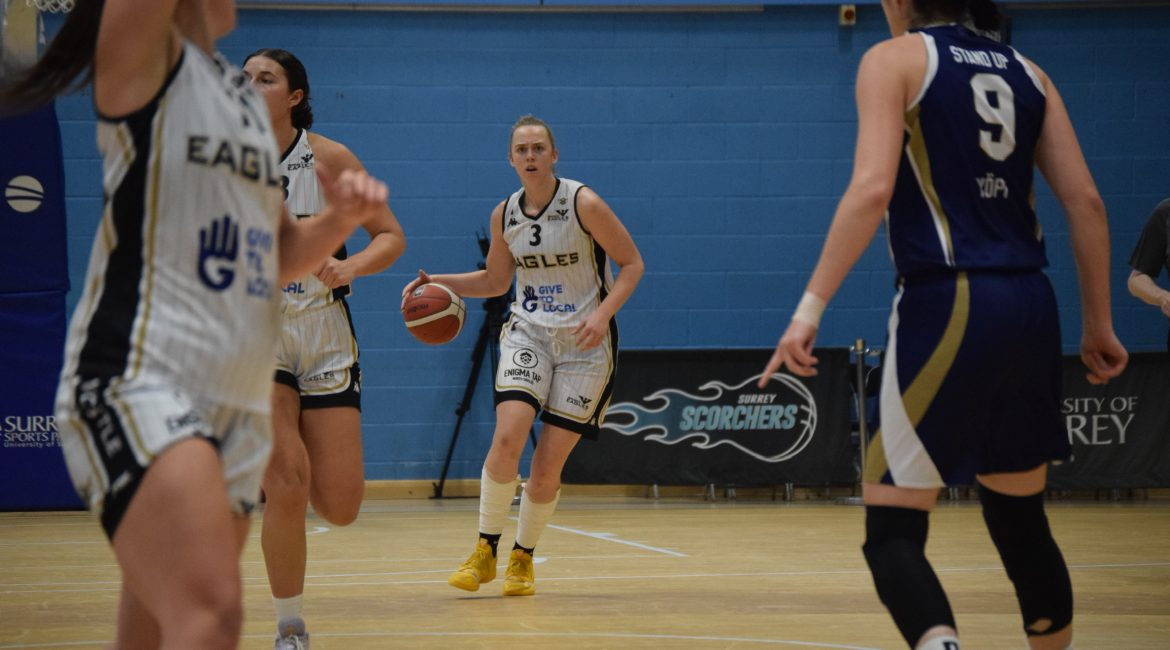 And the fired-up forward responded to head coach Chris Bunten’s call for greater consistency by revealing she’s leaving no stone unturned in the quest to get back to her powerful best.

Against league champions Sevenoaks Suns last weekend, Gaynor showed exciting glimpses of the form that made her one of Britain’s most talked about Under 20 prospects four years ago.

But the 23-year-old admitted: “I’m still not where I want to be. That means extra shooting and extra lifting – whatever it takes to get to that point.

“I need to maintain my fitness and my health after three injury-interrupted seasons in the States and knee surgery.

“If I can keep on top of that and put in the extra work in between games I’ll get there.

“Chris wants to see me performing at my best week-in, week-out rather than in fits and starts and that’s fair comment.

“I can’t just have one-off games. I need to be putting up the big numbers and posing an offensive threat every time I step on court.

“It was good for me to play more aggressively against the Suns but it’s all about building on that this weekend.

“Leicester are always tough but they’re not unbeatable. We have the weapons to win against any team in the WBBL but we need to up our game collectively to do that.”

Gaynor bagged 12 points and six boards at Sevenoaks in what was her best performance yet in an Eagles vest.

And the former Nottingham star is relishing an opportunity to repeat the trick in tonight’s WBBL Cup semi-final dress rehearsal at the Vertu Motors Arena.

“It’s been a year now since I got back to playing after my surgery and I’m finally starting to feel a bit more like my old self,” she added.

“The more games I play, the better I feel and the more confidence I have that I can perform at this level again.

“I’m working really hard on my game and focusing on the things that I should be doing.

“I’m not alone. As a team we share that mentality and we’re going out against the Riders looking to do the best job that we can.

“It’s just about every player putting their best game together at the same time on the same night. If we do that then we have more than enough to win this weekend’s game and any game.”

Bunten heads into tonight’s clash as the newly-crowned Sport Newcastle Coach of the Year – the city’s highest accolade for coaches across all sports.

But the playcaller admitted a tough start to his eighth season in the WBBL means he has his work cut out to justify the coveted award.

“I couldn’t be prouder to have followed in the footsteps of so many great coaches who have made their mark in Newcastle down the years,” he said.

“It’s a privilege for me to work with Newcastle Eagles and Northumbria University and to play a part in developing basketball talent on Tyneside.

“I’m just relieved those judging the award didn’t look too closely at this season’s results. It’s been a very tough start for us but we will get better.

“This is a team with plenty of talent and ambition and I expect our developing British players to go on and represent their country at senior level.

“They epitomise an exciting future for women’s basketball in Newcastle.”

Bunten is again expected to be without skipper Marina Fernandez and sidelined forward Courtney Clasen for the Riders’ clash as the Eagles look to haul themselves off the bottom of the WBBL Championship table.

But after a promising week of practice, the former has targeted a full return to action in time for next weekend’s North East derby at Durham Palatinates.

Clasen’s knee injury appears more serious but there has been no official update on the US star’s shot-term future since she limped out of last month’s WBBL Cup tie with Caledonia Pride.

Tickets for the clash are still available on the box office and can be bought on the door when the open from 6pm with tip-off at 7pm.