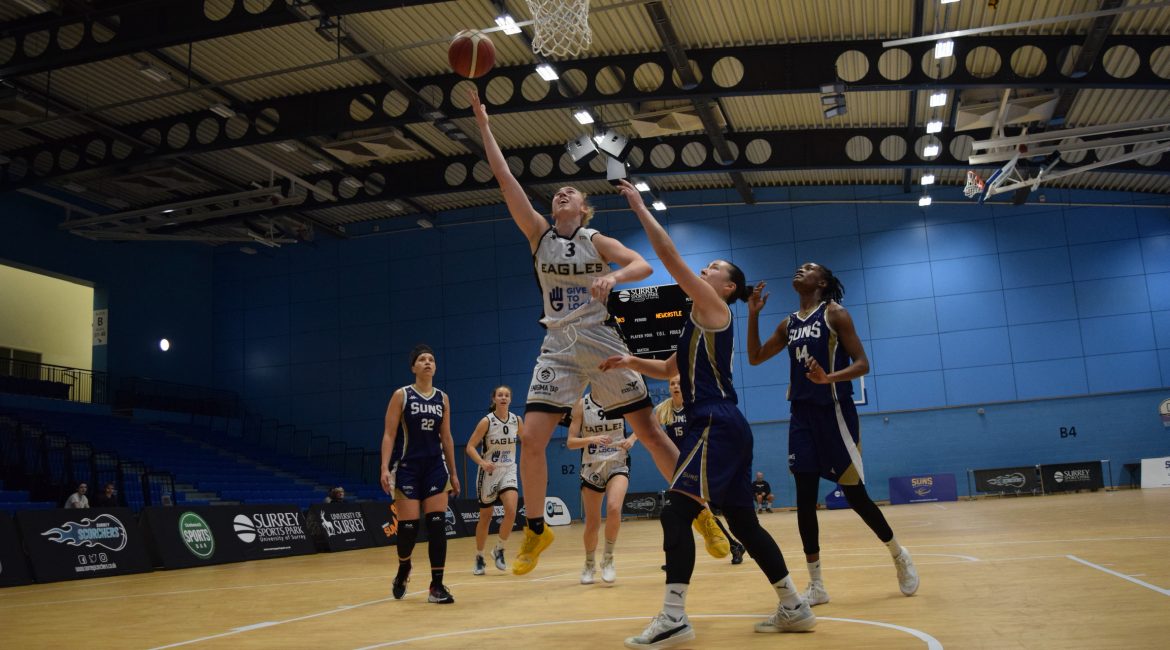 Chris Bunten has called for collective commitment and greater consistency as Newcastle’s winless start to the league season stretched to a third game.

Champions Sevenoaks were back to their ruthless best just five months after the Eagles eclipsed the Suns in a dramatic playoff semi-final.

And while Bunten praised a breakout performance from close-season signing Chloe Gaynor, he didn’t hold back in his criticism of a team stuck in an early season rut.

“Credit to Chloe for a superb second half and I thought she was great in trying to get us back into the game,” said Newcastle’s playcaller.

“I need Chloe to be at that level every game but she can’t do it alone.

“Right now we’re lacking a consistent scorer like Ali Gorrell and players who can step up and when it matters most.

“We did an ok job in spells against the Suns but we didn’t score a point from fast breaks and too many players just aren’t hitting their rhythm.”

Horton and Eadsforth-Yates were included on coach Bunten’s bench with Niamh Kelshaw and Anna Popovic making their presence felt in the starting five.

The visitors settled into a 3-2 zone early on in a bid to limit Suns’ playmaker Cat Carr’s influence.

But the former Team Northumbria favourite went on to run the first half show — adding seven assists and six rebounds to her eight first half points.

Carr accelerated through the Eagles’ defence at will during a showstopping basketball masterclass but it was her pinpoint passing that caught the eye.

And had the US guard’s team-mates taken better care of the ball under the glass then the perennial WBBL MVP contender would have taken 10-plus dishes into the second half.

Newcastle trailed 41-22 at half-time but it wasn’t all down to Carr’s cross court influence.

The visitors turned the ball over 10 times in the opening 20 minutes and conceded 11 first half fouls.

Sevenoaks plundered 26 points in the paint as the Eagles struggled inside but of greater concern to Bunten was another below-par display from Abby Lowe.

Last season’s breakout star was scoreless in more than 10 minutes of first half basketball — throwing up just two shots on another frustrating afternoon for the GB 3×3 international.

Another player key to hauling the Eagles clear of the WBBL Championship basement is Gaynor and the former Nottingham star enjoyed her best game in a black and white shirt after the break.

Going hard at both ends of the court, the former GB Under 20 international looked fluid in offence and disciplined in defence as she bagged 12 points and six boards in 28 minutes.

But Sevenoaks were relentless in their pursuit of another big win and Carr had 16 points, 11 rebounds, eight assists and two steals when Suns’ playcaller Len Busch finally sat his star player down with three-and-a-half minutes remaining.

“I didn’t even think about that game. I’m focusing on this team and this year.

“And my players work so hard during the week that game day is actually easier than practice.”

Newcastle return to the Vertu Motors Arena on Saturday in a dress rehearsal for next month’s BBL Cup semi-final against Leicester Riders. Tip-off is at 7pm and tickets are on sale now from the box office.