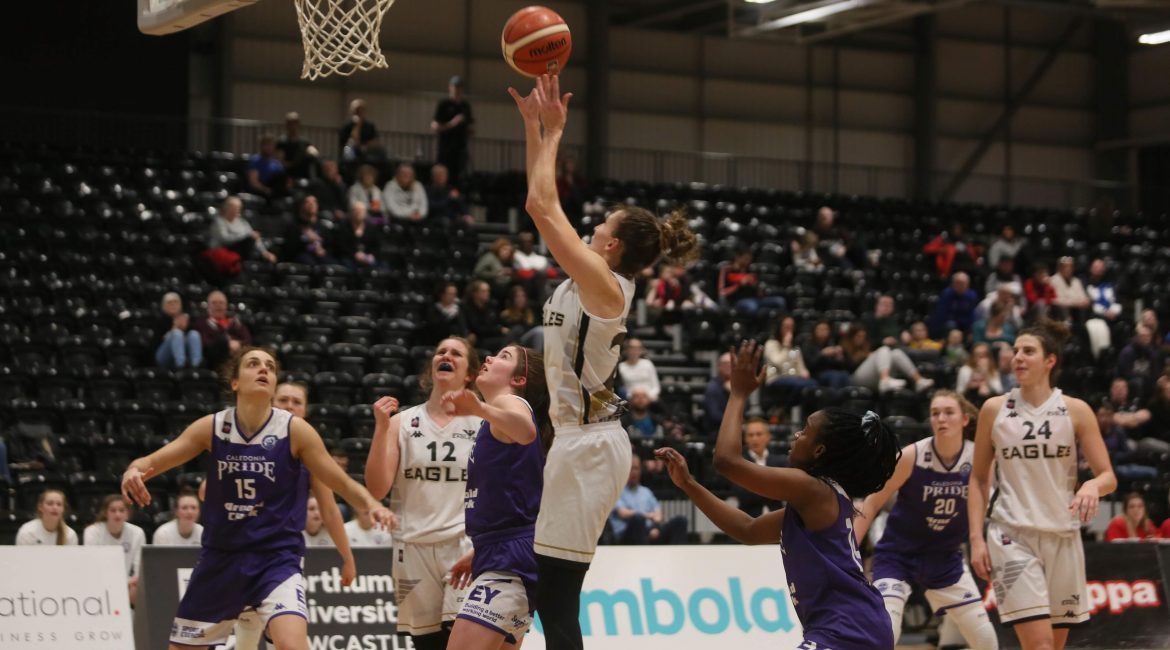 Newcastle Eagles WBBL have got silverware in their sights as they chase an eighth straight league win against top four rivals Nottingham Wildcats this weekend.

That’s the warning from ice cool Austrian Anja Fuchs-Robetin as this season’s dark horses emerge as serious contenders for the game’s biggest prizes.

Chris Bunten’s side came within a whisker of bagging their place in this month’s WBBL Cup final before slipping to a five-point defeat at perennial winners Sevenoaks Suns.

And Fuchs-Robetin insisted: “The league and the playoffs are in our sights.

“Winning those competitions has to be our target now. Why not?

“We have proved ourselves to be one of the best teams in the league and the next step is to win something.

“We’ve gone from being the team that nobody really took any notice of to the team to beat.

“Opponents have started to respect us a lot more and that’s only added to our confidence and self-belief.”

Fuchs-Robetin has emerged as one of the unsung heroes of Bunten’s high-flying Roster with the versatile guard as consistent as she is effective.

But Fuchs-Robetin revealed Bunten’s side has been working hard all week to arrest a slump in scoring from the free throw line and beyond the arc.

“Earlier in the season there were games where we were hitting our free throws and making plenty of threes,” she added.

“But last weekend was the complete opposite. I think there was an element of fatigue but who knows why?”

And things weren’t much better from the bonus stripe where Bunten’s players hit fewer than 50% of their free throws against the Suns and Pride.

“We know it’s something we can fix and we will,” added Fuchs-Robetin, who sits fourth in the league for free throws made.

“We just need to bring the energy and come out strong against Nottingham.

“There have been times when we’ve started too slowly this season but we can’t afford to do that against a side like the Wildcats.”

Nottingham boast one of the WBBL’s most explosive stars in the shape of Jasmine Joyner.

And Bunten’s side will need to keep the prolific forward quiet if they are to clinch the win at the Eagles Community Arena today.

Joyner leads the league in rebounds (13.6 per game) and is second in scoring after bagging 19 points per game.

But Fuchs-Robetin added: “We have weapons of our own. Our strength is that we have so many options.

“If you manage to stop one of us then someone else will step up.

“By the end of the month we’ll have played Nottingham and Leicester and we’ll know exactly where we’re at.

“It’s a big month but an exciting month.”

Tickets for the clash are still available for £6: