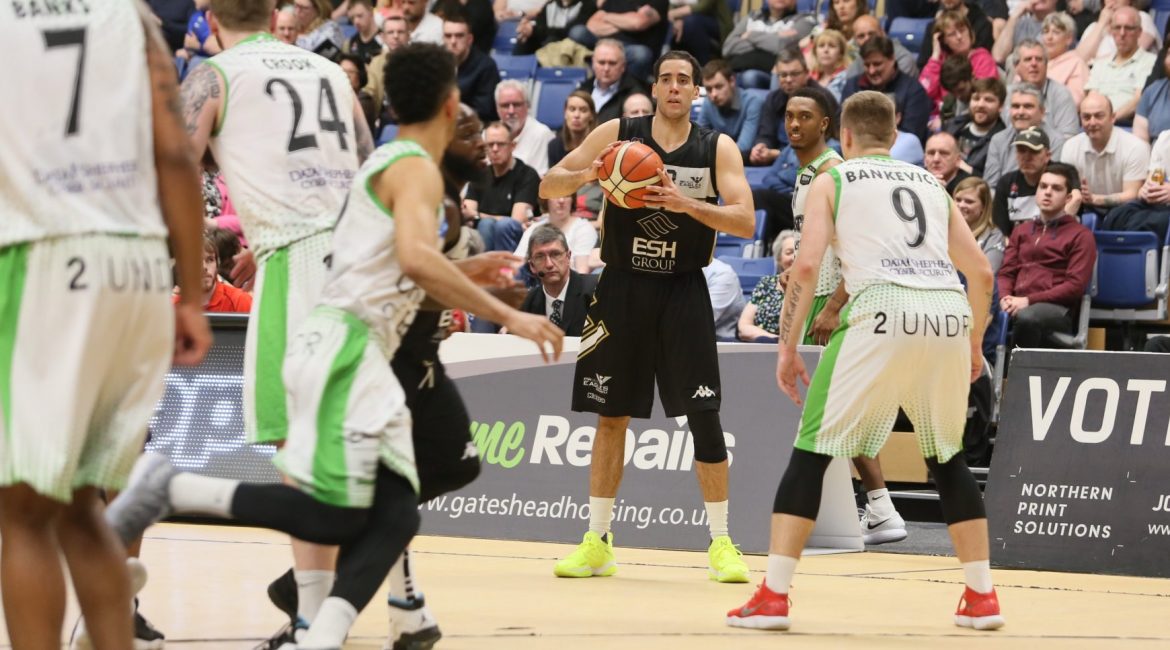 Esh Group Eagles Newcastle play Plymouth Raiders tonight in the last home BBL Championship game of the 2017-18 season, writes Jeff King. They will then close the regular season on Sunday down at Surrey.

The Eagles are looking to win both these games and hope that results go in their favour to secure the runners-up spot in the BBL table. You have to go back to season 2002/03 to find the last time the Eagles finished outside the top two in The BBL.

After the conclusion of Sunday’s BBL Championship games, the Eagles will know their final league placing and who their first-round play-off opponents are. For wingman Kai Williams though it’s about looking forward not back.

Putting last Sunday’s 63 – 59 defeat at Glasgow behind him was the first step where he conceded the team wasn’t at their best but, he preferred to consider the upcoming weekend and the forthcoming play-off games.

“We really didn’t come out and start the right way. We dug ourselves in to a hole basically and were unable to get out of it. We did some good things in the second half to give ourselves a chance, but we were in too big a hole to recover.”

“Glasgow are a quality team and we can’t afford to give them a start. They pretty much controlled the game at both ends and you must give them a lot of credit. But that’s behind us now. We have to look at what’s to come.”

“Going in to these last two games of the regular season we want to play well, and we want to win and try to get in to a good groove going in to the play-offs. I don’t think it matters much where we’re going to finish although obviously we want to finish as high as possible.”

“To win a play-off championship would mean we have five very tough games ahead of us. We need to finish off the regular season as well as possible and then obviously we could run in to anyone. But if you want to win you eventually have to go through all the top teams.”

“I don’t think the guys are overly concerned about who we play in the first round. We just have to be ready to play and hit the ground running and that starts with this weekend.”

Kai is now the only Williams brother that can help the Eagles this weekend and post-season as brother Jamal is out for the rest of the season with a broken arm. Kai believes his brother will be a miss.

“Outside of Jamal we pretty much have everybody just about healthy. Some of the guys are working their way back to full fitness and some are carrying a knock or two but that’s to be expected at this end of the season.”

“I do think it’s unfortunate that we’ve lost Jamal as he’s a big piece of what we do. He might not be scoring the most points but he’s very locked in defensively and he knows what we’re trying to do so it’s a big hit. We just have to hope we can all step up to cover his loss.”

So, first up in the race to the end of the season is Plymouth Raiders a side that Eagles have beaten at home and lost on the road too and it’s that home factor that Williams feels might be key.

“One tough thing about playing Plymouth is that it’s a really, really tough travel all the way down there but it’s equally as tough for them coming all the way up here. So, we have to use that to our advantage and make sure we get off to a strong start.”

“If we can we then we can build a platform that will help us through the game and we can look to finish them off early, pickup the win and get ourselves in to a good place and mindset for what is to follow.”