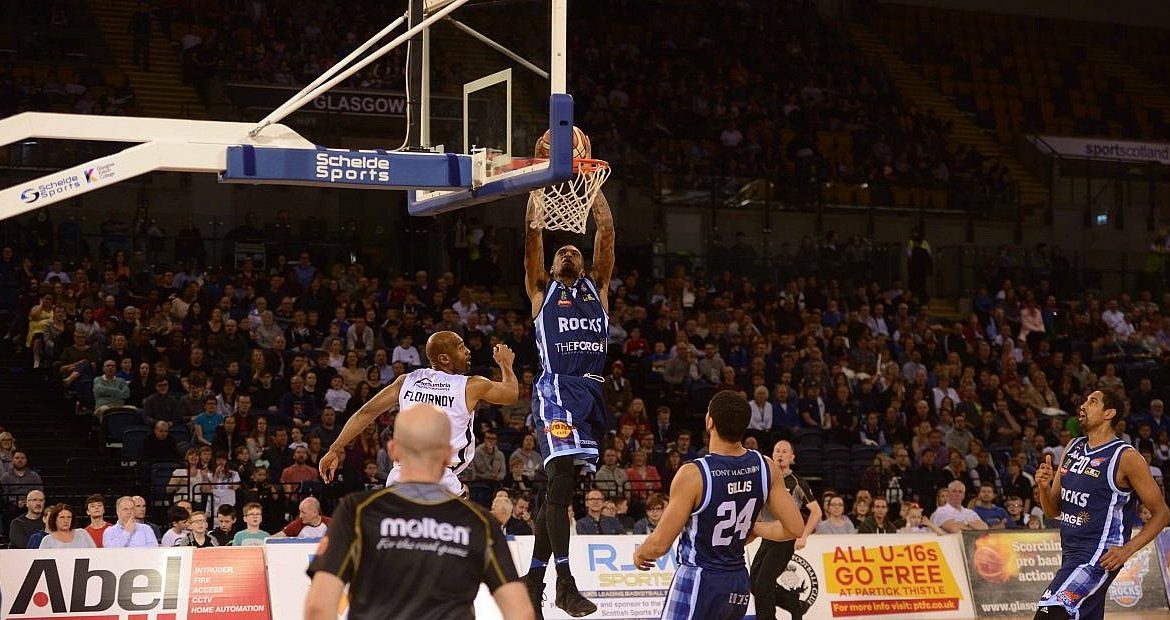 Esh Group Eagles Newcastle’s grip on second place in The BBL was loosened last night in Glasgow by the hometown Rocks. It meant that Rocks kept their own hopes of finishing as runners-up alive taking a close game which lacked in quality but made up for it in excitement, writes Jeff King.

The Eagles had both Jamal Williams and Jaysean Paige suited up for this game. However, it was always going to be questionable as to how many minutes they could play. In the end it wasn’t many as Newcastle despite a heroic comeback slid to another road defeat.

In truth, the Eagles looked a side lacking cohesion and rhythm which given the number of injuries they have been carrying lately was not surprising. Perhaps what was surprising was that a full Rocks roster didn’t take advantage of it through virtually three quarters.

After a first half when the normal free-scoring Eagles struggled and only managed to put 20 points on the board, they found themselves down 36 – 20 at the interval and then in the second half down by as many as eighteen but they so nearly turned that around.

Newcastle had gone in front early 6 – 3 but it was a very slow start from both teams in a scrappy game where neither side able to execute on offence. Rocks did make the first significant move and 8 – 0 run forced the Eagles to call a time-out.

Rocks made it an 11-point run with a triple before Jamal Williams’ two-point effort, Eagles first points for over five minutes, followed by his triple finally got Newcastle in to double figures and a lacklustre period ended with the home side in front 14 – 11.

A 7 – 0 start to the second quarter from Rocks saw Eagles bring Paige off the bench. His first contribution was a tip-in followed by a 3-point effort, but it proved to be a false dawn. Glasgow rallied on defence and found just enough at the other end to stretch away as Eagles continued to struggle and the half ended.

It was more of the same as the second twenty minutes opened. Neither side flowing or converting although the home side did push the lead to 18-points at one stage. With under three minutes to play in the third the Eagles had only scored four points since the half.

Then, Kai Williams netted five quick points to help his side to actually win the quarter but with ten minutes to play they were still down fourteen. It was Kai Williams who eventually sparked the Eagles in to live in the final period with back to back triples cutting the lead to ten.

Jure Gunjina also suddenly got going and his second triple of the quarter followed up by good work from Saah Nimley rocked Glasgow and despite not flowing, Eagles character had seen them get right back in the game and within one at 57 – 56.

But, Rocks held their nerve with time running down and scored the next four points as the game went in to the final minute. Another Kai Williams triple pulled it back within two put with time against them and running out, two Nate Britt free-throws sealed the deal for The Rocks.

This was a strange game with both side’s showing flashes of their ability but far more periods of error-strewn basketball. But, in the end, another away defeat for Newcastle sees them now going in to the last week of the season only just edging second place in the BBL table with the 2-1 head-to-head over London Lions who are also on 21 wins with 10 losses.

Our Eagles are back in action at home this Friday night against 10 placed Plymouth Raiders. Sign-up to our newsletter emails for great value tickets with an instant offer in your inbox: