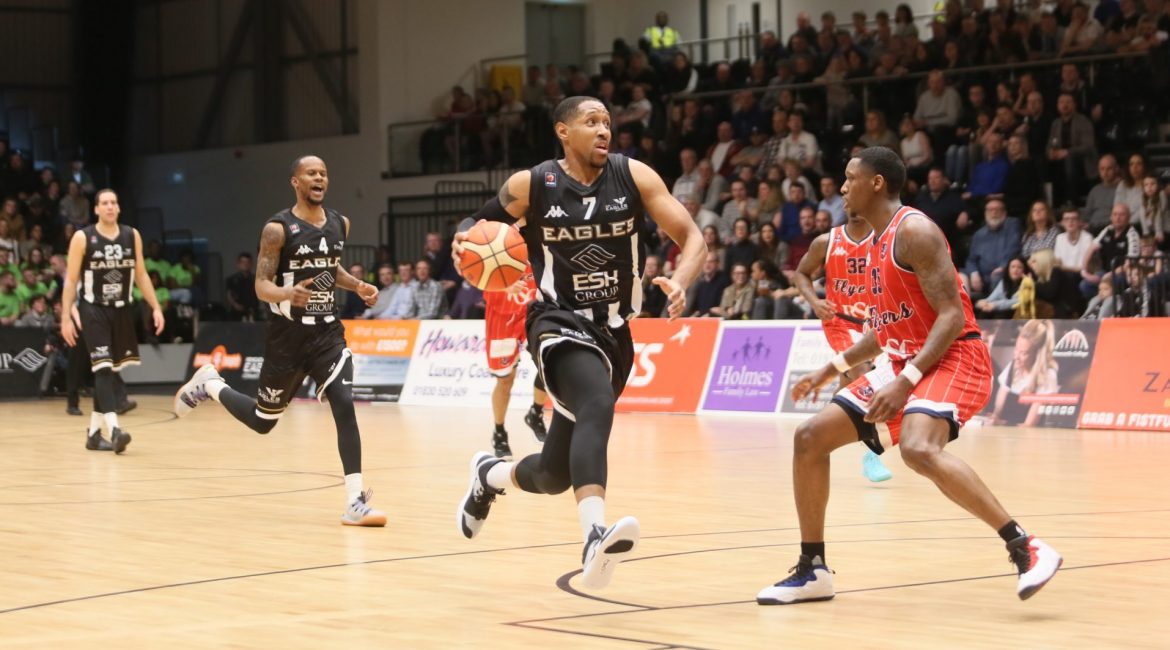 After a superb month when they won six out of seven BBL Championship games, Esh Group Eagles Newcastle have marched in to second place in the league table and consolidated their play-off position.

Tonight, they begin the last full month of the regular season by hosting Manchester Giants in yet another crucial game. The Eagles will be looking to make it five wins in a row and six in a row at home and set themselves up for Sunday’s huge clash down in London against table-topping London Lions.

The Giants, who are visiting the fabulous Eagles Community Arena for the third time in its short existence, are currently clinging on to the last play-off spot in eighth place. They have beaten Newcastle on their new home court back in January in a BBL Trophy game and a win tonight is critical to them.

WATCH EAGLES AT LIONS THIS SUNDAY ON BBC SPORT

This Sunday afternoon the top two teams in the BBL meet as our Eagles visit league leaders the London Lions and this huge game will be live on BBC Sport with tip-off at 4pm.

You can watch the action live from the Copper Box on the BBC Red Button as well as from the BBC Sport website, app, connected TV and iPlayer.

It would help their play-off hopes and they will make it very tough for the Eagles tonight. The home side did reverse that Trophy loss the last time the teams met in Newcastle with a 93 – 85 win only to lose on the road to Manchester by a single point less than ten days later.

The season series between the two sides is therefore on the line and with both teams craving a win that will be crucial to their end of season position a mouth-watering match-up is in prospect for what will be another bumper crowd in The ECA.

Newcastle received a boost yesterday as power forward Victor Moses was voted the Molten BBL Player of the Month for March after averaging 22.7 points and 9 rebounds a game, being successful on 62% of his shots leading from the front for his team. He’s in confident mood going in to tonight’s game.

“I definitely had a great month but I owe it all to my team-mates who kept finding me in positions where I could be successful from and that opened up a lot of things for me which was good. But we all played well as a team last month.”

One of the key battles in tonight’s game will be the match-up between the red-hot Moses and Manchester’s own star power forward who is averaging a superb double-double for the full season including an astonishing 15+ rebounds a game. Moses is well aware of Clayton’s abilities.

“Willie’s a great player and brings a lot to the table. He’s going to attack you offensively on the glass and make sure you’ve got to keep a body on him. He’s a great player having a great season and is a tough match-up for sure. We just have to try and restrict him as best we can.”

If the Eagles can take down the Giants tonight it would give them a keep their run going as they have another tough game on Sunday away at league leaders London Lions.

“If we get the win tonight it’ll definitely give us a good confidence going in to that game against the top team in the league. We’re all looking forward to playing in front of our own fans tonight. Playing on the road is tough but it’s been fun but it’ll be great to be back in our gym.”

Tip-off at the ECA tonight is at the usual time of 7:30pm and it’s a game that everyone is looking forward to.

Tickets are still available, but hurry to get the best seats in the house for the action: