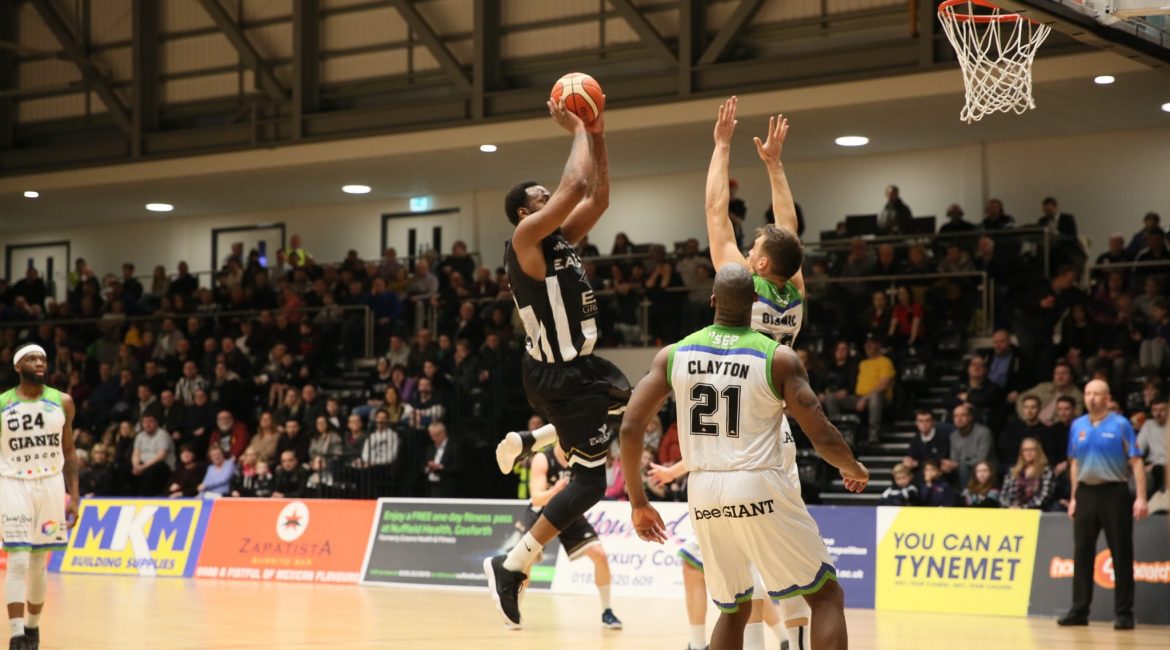 Home sweet home? Not yet. At least not for our Eagles.

A second defeat on the bounce at the club’s brand new arena means it will be February before Newcastle fans can even think about celebrating a first win at the club’s first permanent home.

Fresh from dumping holders Leicester Riders out of the BBL Trophy, a fast-improving Manchester Giants repeated the trick with a deserved 89-71 win on Tyneside against the six-times winners and 10-times finalists.

And another feeble exit from a knockout competition reinforced the view that no matter how magnificent the off-court facilities, this season’s on-court crisis looks set to deepen.

Out of the BBL Cup and with the Championship race wide open, the Trophy had taken on far greater significance for the Eagles since last month’s comfortable victory against Edinburgh Kings. And on paper Manchester’s shock first round win against Leicester made claiming a final fours berth a far easier proposition for the men in black.

But progress in this season’s Trophy was far from guaranteed given the absence of Flournoy and influential forward Victor Moses. The latter hobbled out of last Friday’s grand opening of the ECA with many observers convinced that Newcastle would have eased past Plymouth Raiders had the prolific 6ft 7in points machine stayed fit.

For the second successive week Moses cut a dejected figure on the Eagles bench and watching team mate Darius Defoe pick up two first quarter fouls will hardly have improved the American’s pensive mood. On a night when every inch mattered for the short-handed hosts Newcastle could ill afford their biggest inside threat to sit out so early.

Ironically Defoe – who hit the first points at the ECA seven days earlier – had opened his account with a rare triple to fire the Eagles into a 19-14 lead. But with the big man benched a resurgent Manchester sensed their opportunity: Callum Jones set the seal on a 10-0 tear to close the quarter with a coolly taken fadeaway two.

Local favourite Eddie Matthew entered the fray at the outset of the second period with home court fans hoping for a repeat of the former Morpeth guard’s heroics against the Kings in the previous round.

With a bulked up Matthew a busy and bustling presence on the flanks and Defoe back in the game Newcastle suddenly looked a more dangerous animal on offence. But looks can be deceiving. Defoe couldn’t buy a basket and it was Callum Jones who cast a shadow over Matthew as back-to-back jumpers took the former Pace point guard to eight points with five-and-a-half minutes of the half remaining.

When the Giants opened up a 46-34 lead Byrne must have been dreaming of a second successive scalp and beginning to believe the semi-finals beckoned. But a 9-0 Eagles run to close the half proved Flournoy’s men weren’t finished just yet – Rahmon Fletcher dishing up his 11th assist of the night as Kai Williams laid up for a buzzer beating two.

A fascinating clash hung in the balance heading into the third quarter but it was Manchester who made the early running after the restart with a 9-0 run to open up a 55-43 lead. Having established a solid platform for victory the visitors restricted Newcastle to a meagre 11 third period points to lead 66-54 heading into the decisive period.

Shooting a paltry 39 per cent from the field and connecting with just six of their 25 three-point attempts, the Eagles’ offence required an urgent reboot. Factor in the Giants’ impressive intensity – Byrne’s boys had out-rebounded Newcastle 39-22 in the first 30 minutes – and the unconvincing hosts had it all to do.

Ultimately the fading Eagles couldn’t do it. And Manchester’s latest Giants killing left Flournoy with plenty of food for thought heading into what could be an uncomfortable 14-day break.