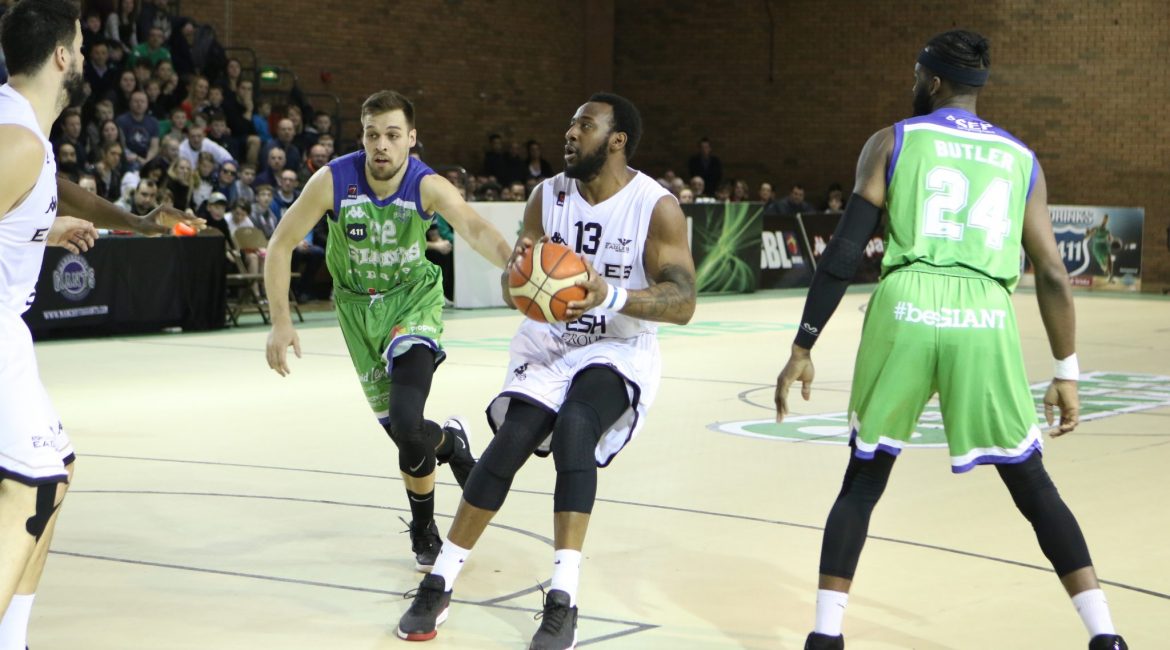 Despite a herculean effort on the road in Manchester against the odds, Esh Group Eagles Newcastle came up just short as they dropped a game they had desperately wanted to win. That it came down to the final play will hurt Newcastle all the more after they ran out of steam late on in the game.

Eagles knew going in to the game that it was going to be tough against a Giants side they had beaten earlier this month at The ECA due to the fact that top-scorer Victor Moses was going to miss the game. But they were dealt another huge blow the night before the game which in the end made a big difference.

Rahmon Fletcher their on-court inspirational leader took sick and was to ill to travel making the Eagles task all the harder. It meant a starting spot for Player/Coach Fab Flournoy as well as Jamal Williams moving in to the first five.

However, for long periods the Newcastle roster heroically covered for each other and countered all that Manchester could throw at them until very late on in the final period when tiredness and fatigue set in and they were unable to stop the Giants talisman Willie Clayton.

The big man inspired his team-mates to a finish that Eagles tiring legs could not hold out against and with 25 massive rebounds to add to his 21 points, he ultimately made the difference for a Giants side that may well be the most improved side in the country this season.

Manchester had made the early running but Newcastle dug in and when Flournoy connected with a triple in the first quarter it levelled the scores at 13 – 13 and then Kai Williams repeated the dose to give the Eagles their first lead.

Giants hit back with a 6 – 0 run to retake the lead although Friday night’s hero Darius Defoe answered that and looked to have given his side a slight advantage until a Giants three-ball ended the first with the home side two points up at 26 – 24.

Jeremy Smith was on of the visitors who stepped up in the first half and his successful free-throw shooting in particular gave the Eagles a slight edge but that man Clayton had the last say with a deuce as time expired at the end of the first twenty minutes and Giants led 47 – 46 at the half.

The Eagles really turned the defensive lock on the home side in the third period. Although not scoring freely themselves they stopped Manchester time and time again and an 8 – 1 run pushed them 54 – 48 ahead with half the third left to play forcing a Giants time-out.

The time-out didn’t galvanise Giants in the way they hoped although they did score again, Kyle Williams answered them and when Jamal Williams added a triple the Eagles led 64 – 57 with just the final period to play.

An unlikely looking win became a distinct possibility as another 7 – 1 run at the beginning of the fourth quarter gave Newcastle their biggest lead of the night at 71 – 58 with 7:05 to go. But that was when the tiredness really kicked in and Friday’s overtime victory against Glasgow Rocks took its toll.

The Giants re-grouped and with Clayton rampant on the boards the second chance points began to stack up against a very tired looking Newcastle roster. The momentum swung the home side’s way and Fab Flournoy and his charges could not find anything to stem the flow as Giants stormed to victory.

An 18 – 4 run over that final seven minutes plus was capped by two Mike McCall free-throws inside the last minute to push them that one-point in front and Kai Williams last gasp three-point effort to take the away win didn’t make it and left a dejected Newcastle side beaten at the buzzer.