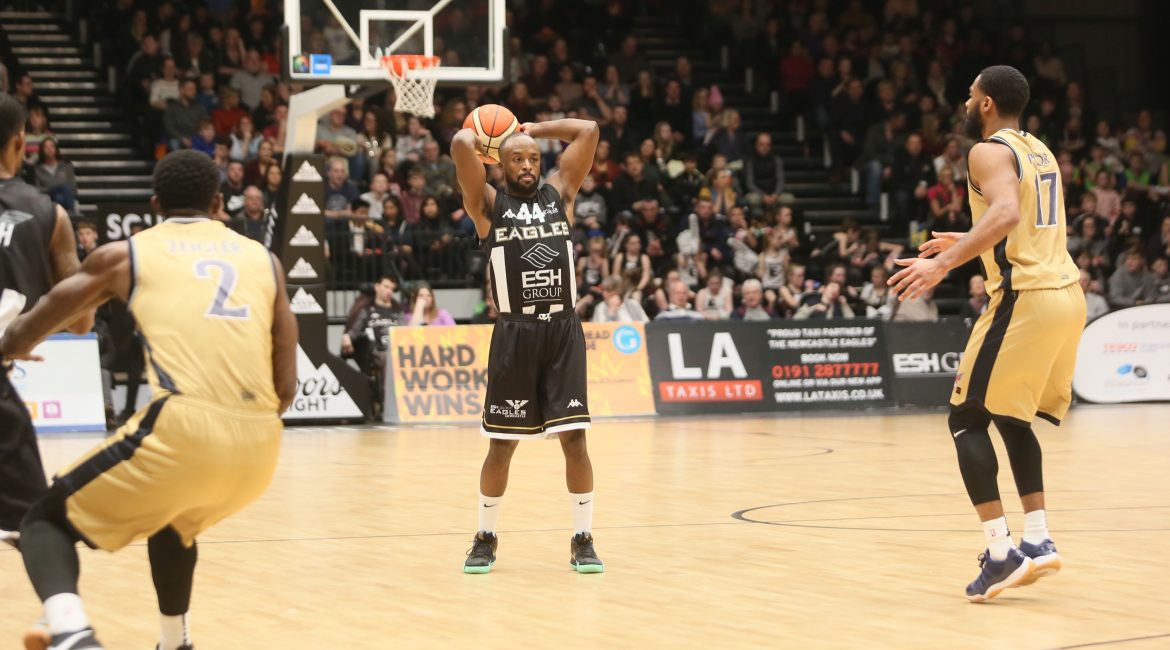 There’s another huge basketball game in store at the Eagles Community Arena as the Glasgow Rocks roll south to take on the home town Esh Group Eagles in a vital BBL Championship clash. The action between two of the oldest and fiercest rivals in the league tips-off at 7:30pm.

The last time the sides came together was a mere three weeks ago and what a game that was. The two sides battled it out toe-to-toe for 45 minutes as the thriller of a game needed overtime to separate them. In the end it was Eagles that prevailed by 104 – 98 in the extra period.

Rocks had a chance to take the win in regulation with the last possession of the game but failed to get a shot off and missed the opportunity to break the tie and take what would have been a memorable win. The game tonight is expected to be every bit as close as that last epic.

Newcastle go in to the game reporting a clean bill of health which means to the relief of all at the Club, Victor Moses will be fit to take his place in the line-up. Moses in his first season as an Eagle has had a dramatic and significant impact on Head Coach Fab Flournoy’s roster.

He leads his side in both scoring at 17.5 points per game and rebounding, pulling down 8.3 boards a game. Moses missed the first two games at Newcastle’s brand spanking new arena and his side lost both of those. Since his return they’ve gone unbeaten at their new home.

Although, he did miss the victory over the Rocks last time out he was back against Bristol last weekend to help his side take their third win in a row on their home court and will be leading the charge as they look to make it four-in-row at home tonight.

Along with point guard Rahmon Fletcher who is leading the league in assists with an incredible 9.4 per game they provide the 1-2 punch that Newcastle largely use as their platform to spring from. Not that the pair are alone in being the only ammunition the home side have.

Captain Darius Defoe played every second of the 45 minutes last time out against Glasgow and his MVP performance of 26 points and 12 rebounds was a huge factor in the win last time. Throw in scoring guards Jeremy Smith and Kyle Williams who are both in great form and Newcastle have plenty of firepower.

The Eagles sit third in The BBL table with a 14 – 7 record. They need the win to consolidate their position and keep their faint Championship hopes alive. Rocks sit ninth in the standings on 8 – 10 but have played fewer games than anyone in the league and a win for them would boost their play-off hopes.

Plus, whilst Newcastle have Moses back for this clash, Rocks have a new X-factor of their own to boost their chances. Shortly after that loss to Newcastle they parted ways with Head Coach Darryl Wood meaning they have a new man at the helm tonight for his first taste of BBL action.

This will be 47-year-old Frenchman Vincent Lavandier’s first game in charge of his new side following his appointment as interim Head Coach for the rest of Glasgow’s season. He’s had a week or so with his players and no doubt they will be keen to impress their new boss and give him a winning start.

Newcastle though know a win will give them the league series sweep of all three contests against the Scots and give them that fourth victory in a row at home. The feeling in the Newcastle camp is that this new venue is very much their house and in front of a packed partisan crowd that could be the advantage.