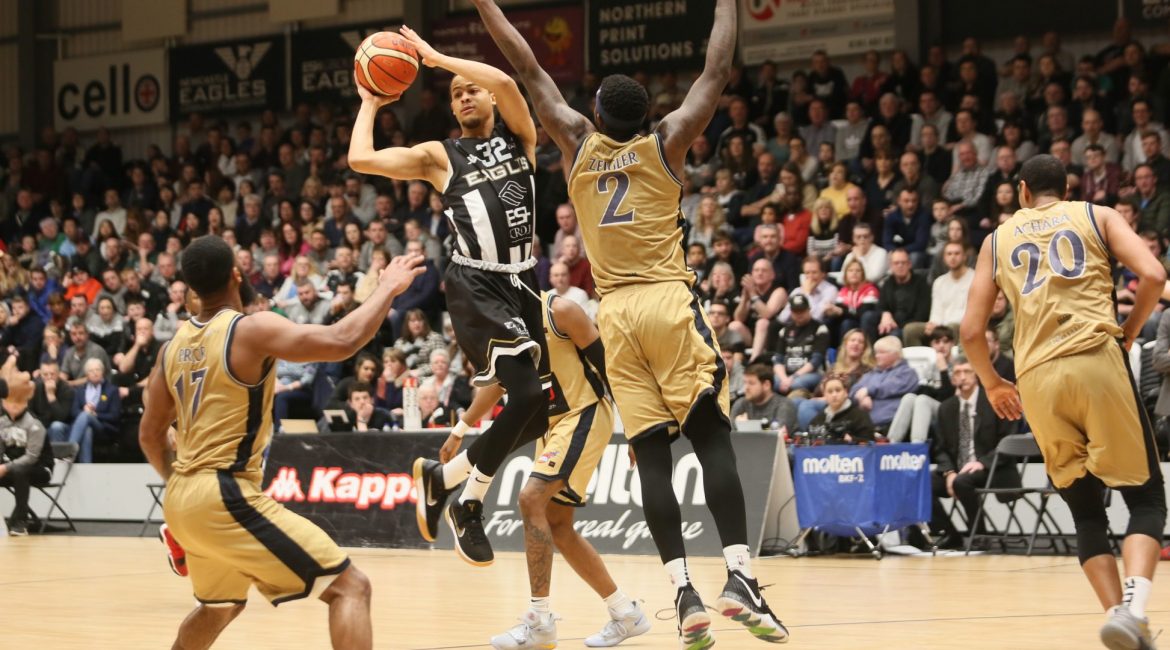 Lightning rarely strikes twice. But on a night when Newcastle needed another win at the Eagles Community Arena to stay within touching distance of second-placed Leicester Riders, a thunderous start laid the foundation for an invaluable victory.

Overtime was required to separate these teams three weeks ago but there was no repeat of that remarkably tense and ultimately thrilling advert for BBL hoops as Newcastle kept Glasgow Rocks at bay from tip to buzzer.

Double doubles from captain fantastic Rahmon Fletcher and the fit-again Victor Moses paced a much-improved Newcastle performance as the in-form duo fired the hosts towards a fourth straight homecourt win.

And after racing out of the blocks to bag 26 first period points, the hosts bookended a dominant display with a further 24 in the final quarter.

Right now Newcastle’s rapid starts aren’t dissimilar to those favoured by Brett Brown at NBA heavyweights Philadelphia. The 76ers are streets ahead of their NBA rivals when it comes to pouring in the first period points and the Eagles could have plundered 30 or more in that quick-fire opening 10 minutes.

Like Phily, Newcastle have embraced a ‘process’ of their own in recent months – reflecting significant changes in personnel and the addition of extra pace from back to front. And if questions persist about the club’s on-court identity, following years of BBL dominance, the Eagles’ coaching staff remain confident that the current roster is buying into a new brand of transitional hoops.

It appears the key to that fresh approach is shifting the ball coast to coast without pausing for breath. And if Drew Lasker is one of Newcastle’s veterans, then the pacy guard nevertheless epitomised the Eagles’ newly expansive game by racing into the opposition paint to seal a wholly deserved and-one – opening up a 32-25 lead midway through the second quarter and finishing from the bonus stripe for good measure.

Earlier, Moses had done everything in his power to retain possession as the US forward somehow hooked the ball back into play as he fell backwards into the advertising hoardings. Kai Williams finished under the basket and both players exchanged knowing glances as a result of a job well done.

For more than a decade, of course, Newcastle built their unblemished reputation on total team basketball and perhaps the disparate individuals who struggled for form prior to Christmas are finally beginning to bond. A positive attitude and disciplined application haven’t always been evident this season – Glasgow trailed by eight at the half as both qualities underpinned the hosts’ early dominance.

Even so, the Rocks were winning the battle of the boards: interim coach Vincent Lavandier must have taken some comfort from the fact that his players had outrebounded the Eagles 22-16 in the first 20 minutes. And if Glasgow were going to find a way back into the game – and repeat the previous month’s heroic effort on Tyneside – it would surely need the Scots’ big men to exert an even greater influence.

Gareth Murray, back in the starting five after injury ruled the forward out of last month’s cross-border clash, and Kieron Achara had hardly lit up the Rocks’ offence but they weren’t alone. Rebounding aside, Newcastle were defending well and forcing Glasgow to take the toughest of shots.

The Rocks, to their credit, never shirk a challenge and the visitors took the third period 19-17 to trim the deficit to six heading into the final period. Shooting seven from 18 from three-point range, it seemed Glasgow’s greatest threat might come from the perimeter, rather than the paint, after all. Locking down Greg Pryor was of paramount importance to an Eagles’ side facing a tense finale.

Newcastle managed that. And with the imperious Moses adding 10 boards to his game-high 25 points, the Eagles laid down a marker heading into the business end of the regular season.