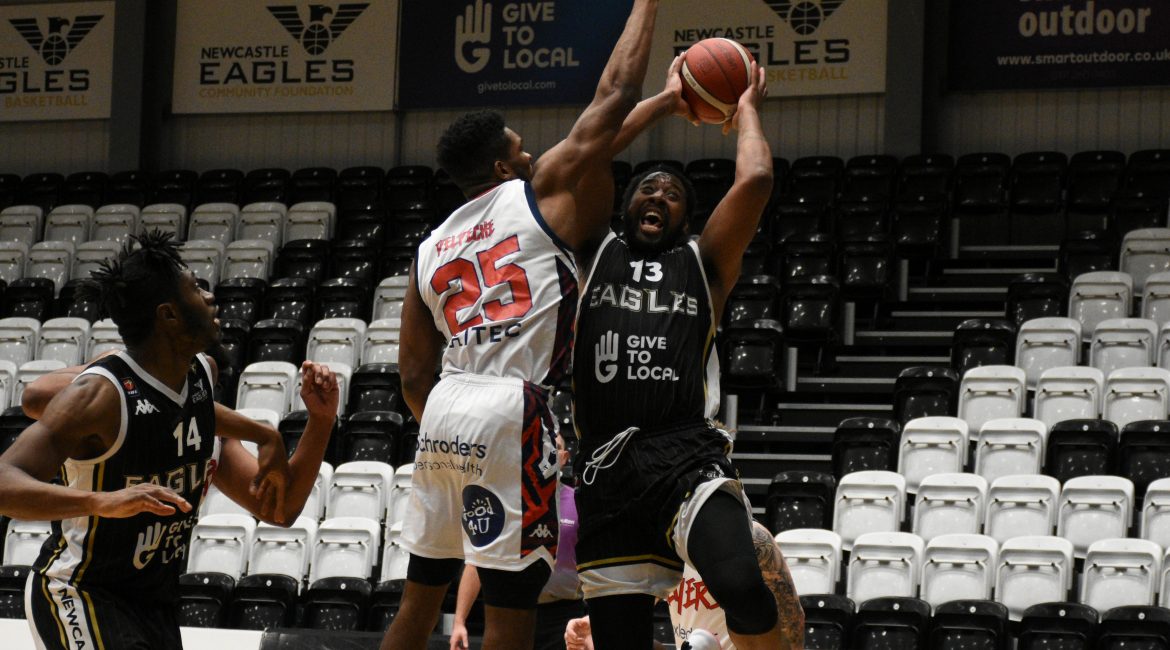 The Eagles had a tremendous home win a week ago over champions-elect Leicester Riders by 90 – 80 and then followed it up in Glasgow with a last-gasp 85 – 83 win over bottom of the table Rocks. Two results which show how tough a league the BBL is.

That win last Sunday was achieved without veteran forward Darius Defoe who is so often the heart and soul of the Newcastle defensive unit. Defoe tweaked a hamstring against Leicester which caused him to miss the game although he was still on the bench supporting his teammates.

Defoe is a doubt for tonight’s game and a decision as to his availability will be left as late as possible to give him every chance of playing as he will once again travel with the team. Defoe spoke about tonight’s game, last week’s efforts and his fitness.

“The physios that are monitoring and helping with my hamstring are being cautious as we don’t want to turn it in to a long-term injury but I feel my fitness is fine so we’ll wait and see. It’s a long travel and it’ll depend how I feel when I get off the bus and into the gym.”

If Defoe doesn’t make it on court he’ll still be playing a full role off the court as he did last Sunday in Glasgow where he virtually acted as Ian Macleod’s assistant coach. With the experience and know-how, he has that would still be a significant impact.

“I wanted to be there last week and I was able to help out by talking to everyone helping them out with what they needed to do but we have a very talented team and they can look after themselves .”

The Eagles have proved in the past they can win without key players but may well miss Defoe’s defensive presence if he’s ruled out.

“I don’t think the guys necessarily missed me last week. They knew I wasn’t playing beforehand and stepped up. That’s what we do we look to be next man up and cover for each other so if I can’t play at Worcester I still think we’ll be alright because we approach each game as a team.”

“It was a tough game last week against Rocks and it will be at Worcester. Every one that plays us always gives it their best shot so we never expect it to be easy. We got the win last Sunday which we were expected to and we just want to keep that moving in the next one.”

“We’re just trying to keep building and taking it a game at a time and hoping that we get too where we want to get too. It’s about getting ready for the play-offs and keeping our fingers crossed that everyone stays fit for the play-off run.”

The Eagles can still finish as high as third in the Championship if they win their last three regular season games and results go in their favour. Worcester could actually be one of the sides they could face in the quarter-finals so tonight’s game is one that both sides will be eager to win.

Tonight’s action is free to watch live from 7pm on the Worcester Wolves YouTube channel.